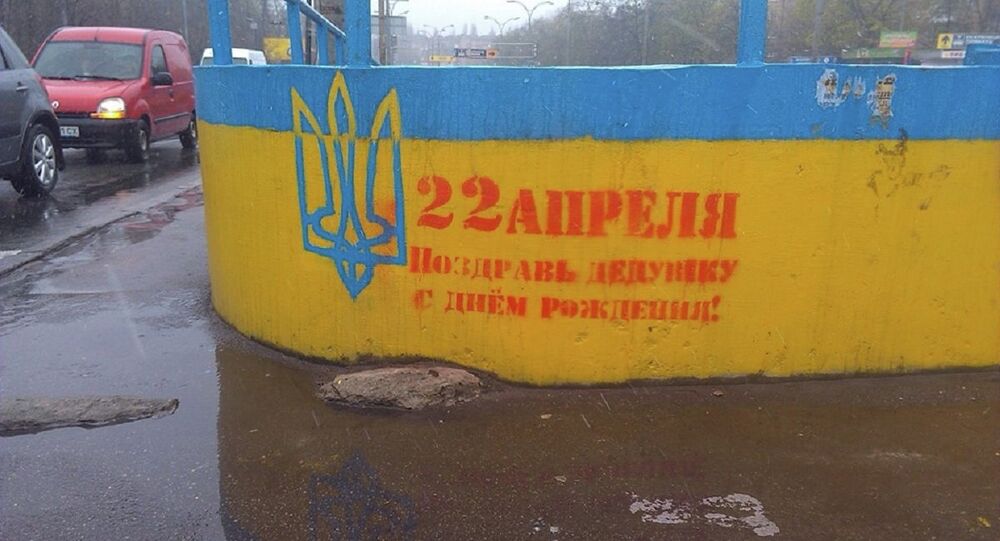 A mysterious form of graffiti has popped up across several Ukrainian cities over the past few days featuring the phrase "April 22. Wish grandpa a happy birthday."

© AP Photo / Igor Chekachkov
'Jihad' on Lenin Monuments: the Truth Kiev Never Wants to Be Published
The code was immediately decipherable for the country's older generations: the 'grandpa' in question was 'Grandpa Lenin', and April 22 is the 145th anniversary of his birth.

Ukraine has undergone a 'deleninization' over the past year, with over 600 monuments to the first Soviet leader 'spontaneously' demolished by masked radicals and post-lustration authorities across the country. Projected as a symbol of Russian domination, the campaign against monuments to the revolutionary leader has only intensified this month after the country's parliament voted to ban communist symbols, propaganda and ideology.

The spontaneous graffiti, featured on bulletin boards, building walls, on fences, and sometimes alongside symbols of Ukraine including the country's flag and coat of arms, was found in Kiev and Zaporozhe beginning April 20th, and has since spread elsewhere.

"Kiev has seen the start of a protest action in honor of Lenin's birthday: 'April 22. Wish grandpa a happy birthday.'"

Runet Bloggers and social media users have speculated about the meaning of the odd form of protest. Some argued that it had something to do with the fact that Lenin (together with other Russian and Soviet leaders) was instrumental in creating the Ukraine that exists today.

"I would like to wish Ukrainians all the best on this great holiday. One of the founders of Ukraine, Vladimir Ilyich Lenin, was born today!"

But it was a Facebook user named Vladimir who seemed to have come closest to deciphering the message's real meaning, noting that it was "red Kiev's underground trolling of the decommunizers, at the same time serving as a new form of communication under conditions of censorship."

Vladimir's analysis was confirmed by Ukrainian news blog Polit Navigator, which managed to interview one of the organizers of the protest action: The unnamed dissenter noted that following parliament's 'ban on communism', enforced in part by roving bands of nationalist radicals, "one cannot simply call on people to celebrate the birthday of one the most prominent political figures of the 20th century. We are not allowed to hand out leaflets in the streets, not allowed to schedule events in social networks, cannot politicize this event…It's dangerous."

"So what can we see when we read carefully the call to 'wish Grandpa a happy birthday?'," the protester asked. "We see that a code is beginning to be developed, a new veiled form of speech, without loud political attributes, with people attempting to say something that's not allowed to be said."

"But no one has yet forbidden to silently come to the center of Kiev, to Bessarabia Square for instance, and to place flowers and a birthday card in the place where a monument demolished by Banderovites once stood," the dissenter noted.

© Sputnik / Chekachkov Igor
Kiev Thinking Twice About 'Banning Communism'
Many Russian social media users stepped out in support of the initiative, with many pointing out that their respect for Lenin is not even necessarily an ideological matter. In a country where statues devoted to the leader continue to stand tall across central city squares and parks in hundreds of cities, Lenin's image is seen by many as a symbol of stability, continuity, and respect for history. A Lenin statue in Simferopol played a key symbolic role in the defense of the Crimean city from the Maidan-inspired revolutionaries last year. In the recent documentary 'Crimea: The Return Home', Crimean Prime Minister Sergei Aksyonov recalled that citizens had organized to defend the Lenin monument in the city's central square from radical nationalist activists, by force if necessary. "For us, [the monument] served as a symbol of stability, and of the ability of authorities to keep the situation under control" during a trying time, Aksyonov noted.

Earlier this month, Ukrainian authorities approved a law aimed at formally banning communist symbols, propaganda and ideology. In addition to being insulting to veterans who fought in wars from the Second World War to Afghanistan under Soviet communist flags, post-Maidan Kiev's anti-communist offensive is projected to cost the country's cash-strapped budget hundreds of millions of dollars.