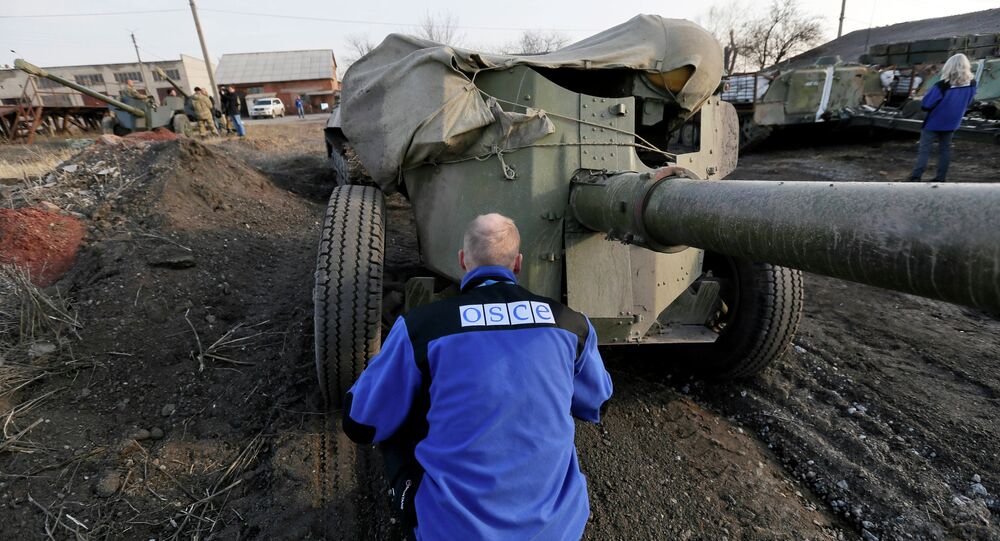 Ukrainian President Petro Poroshenko agreed with his French counterpart Francois Hollande to pay maximum effort o ensure that the work of the OSCE SMM is not blocked and to find a compromise on the format of additional peacekeeping deployments.

© REUTERS / Philippe Wojazer
France to Ratify Association Agreement With Ukraine in Few Months
PARIS (Sputnik) – The presidents of Ukraine and France agreed to make efforts to ensure smooth work of the Organization for Security and Cooperation in Europe (OSCE) in Ukraine, President Petro Poroshenko said Wednesday.

“We agreed that we will pay maximum effort to have all the provisions of the Minsk agreement implemented, to ensure that the work of the OSCE SMM is not blocked and to find a compromise on the format of additional peacekeeping deployments,” Poroshenko said after talks with his French counterpart Francois Hollande.

Under the deal worked out by the leaders of Russia, Ukraine, France and Germany (Normandy Quartet) in February in the Belarusian capital, Minsk, the OSCE has been tasked with monitoring the situation in Ukraine's southeast. Meanwhile, Kiev has been pushing for UN peacekeepers in the war-torn Donbas.

© Sputnik / Mikhail Palinchak
No Need to Request Lethal Weaponry From France at Present - Poroshenko
In March, Ukrainian government requested that the UN Security Council and the EU Council deploy an international peacekeeping operation in the regions of Donetsk and Luhansk in southeastern Ukraine.

Last week, following talks between the foreign ministers of Russia, Germany, France and Ukraine in Berlin, Russian Foreign Minister Sergei Lavrov said the idea of sending a peacekeeping mission to southeastern Ukraine was put forward by Ukrainian foreign minister Pavlo Klimkin, but was not elaborated upon during the Normandy format talks.

In March, OSCE Secretary General Lamberto Zannier doubted that a UN peacekeeping operation in Ukraine would be more successful than the present mission of the OSCE.