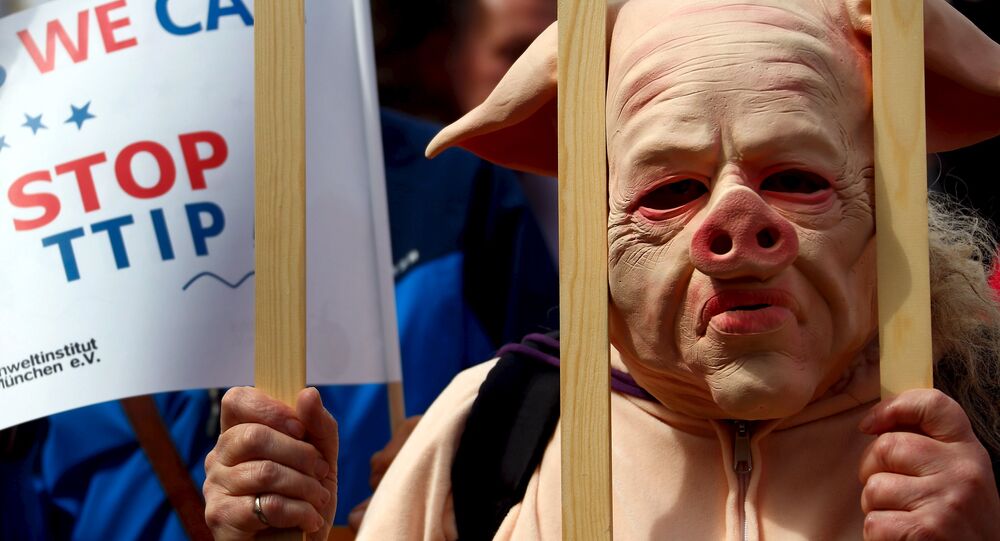 Prince Michael of Liechtenstein claims that he opponents of the Transatlantic Trade and Investment Partnership deal between the United States and the European Union have not taken time to study EU arguments in favour of the treaty.

MOSCOW (Sputnik) — The opponents of the Transatlantic Trade and Investment Partnership (TTIP) deal between the United States and the European Union, who recently took part in anti-TTIP demonstrations, have not taken time to study EU arguments in favour of the treaty, Prince Michael of Liechtenstein said Tuesday.

On April 18, tens of thousands of people took part in anti-TTIP protests in European cities. The demonstrations were especially numerous in Germany, where, according to a recent YouGov poll, more than 40 percent of the population believe that TTIP would be bad for their country.

© REUTERS / Fabrizio Bensch
Anti-TTIP Rallies Show Need of Public Involvement in US-EU Free Trade Talks
"The anti-TTIP groups, including political parties, appear to have no interest in the facts and do not want a serious debate," Prince Michael said in a statement published on the website of the Geopolitical Information Service (GIS), a consulting company he owns.

Prince Michael added that the negotiation process for the TTIP is frequently criticized for secrecy and the speed with which its proponents seek to have it ratified.

"The European Union went out of its way to explain the TTIP negotiations and the underlying reasons for it on its website. It has addressed clearly all the major points of criticism," the Prince wrote, adding that the European Union website with pro-TTIP explanations and especially its German-language version are hardly ever visited.

The TTIP is a proposed trade and investment agreement between the United States and the European Union. The current, 9th round of the TTIP talks started on Monday in New York and will last until Friday.

The opponents of the deal believe it will make it harder for the European states to regulate their own markets and undermine the EU's right to label genetically modified (GMO) food.