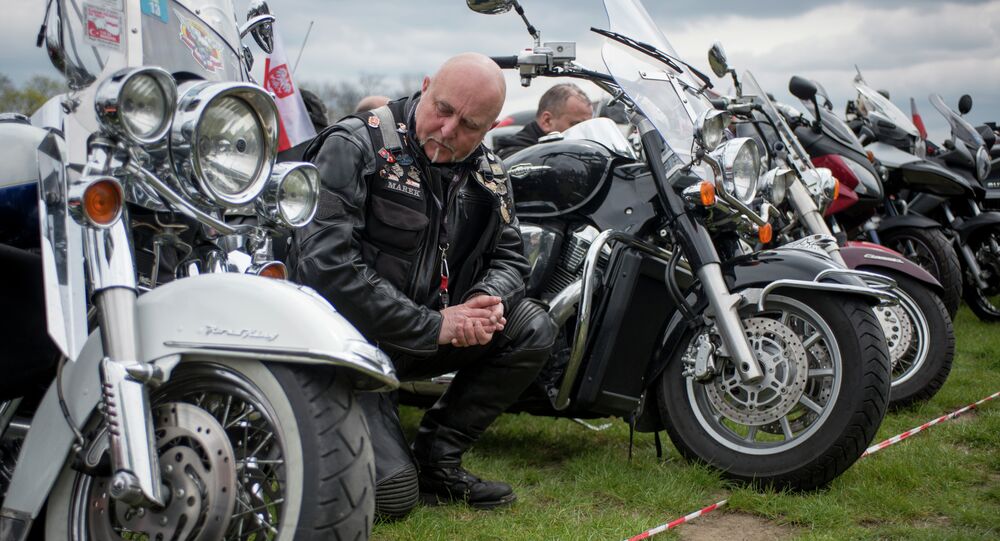 Polish bikers have adopted a resolution vowing that the Russian 'Night Wolves' motorcycle club will get safe passage through Poland on their way to Berlin for Victory Day, Poland's TVN24 reports.

© Photo : Facebook
Brothers-in-Arms: Polish Bikers to Support Russian Bikers’ Ride Via Poland
Participating in the annual pilgrimage to the Josna Gora Monastary in Czestochowa, southern Poland, which marks the traditional opening of the motorcycle season in the country, 'Katyn Rally' commander Wiktor Wegrzyn called on local bikers to adopt a resolution to ensure that the Russians receive "security and hospitality" on Polish territory.

"We, the Polish motorcyclists gathered at the 12th Rally to Jasna Gora named after Rev. Zdzislaw Peszkowski, reaffirm our solidarity with the bikers of the world, and ensure security and hospitality on Polish territory," Wegrzyn noted.

"Today, when functionaries from Polish newspapers and television, using misinformation, have unleashed the baiting our Russian motorcyclist guests hitherto unprecedented in Polish tradition, factually calling on the use of physical violence against them, we declare: The Russian motorcyclists will travel safely through Poland," Wegrzyn declared.

The Katyn Raid Motocross commander emphasized that a "boycott," or worse, "an attack on the Russian bikers, is something against our culture, against Polish morals."

Wegrzyn noted that "we will not allow for any adventurism, and will ensure [the Russians] safe passage and hospitality, of the same kind that they have provided for 14 years to the motorcyclists of the Katyn Raid on all our trips to the East."

The Polish veteran biker explained that "the Russian biker rally from Moscow to Berlin on the 70th Anniversary of Victory over Germany, visiting the battlefields and cemeteries of their forefathers, has the same meaning for the Russians as the Katyn Rally does for Poles."

© Photo : Courtesy of "Night Wolves"
Poland's PM at Odds With Country's Bikers Over Night Wolves V-Day Ride
Wegrzyn asked the gathered bikers to vote on the resolution via the sounding of their horns. Agreeing to his proposal, the bikers then got down to administrative affairs, announcing that the Russians would be met April 27th at the Terespol-Brest border between Poland and Belarus, from where they would be escorted through Poland before moving south to the Czech Republic.

Last week, Alexei Bakulchik, the head of the Minsk branch of the Night Wolves, told Belarus news hub Naviny.by that between 20-30 Belarusian bikers, mostly fellow Night Wolves, would accompany the Russian bikers on their trip through Belarus, stopping by at wartime historical sites in Khatyn, the Kurgan Slavy memorial complex, and the Brest Fortress.

Other Belarusian biker clubs have said that they will not be joining the Russians, the Road Dogs club preparing their own trips through Belarus to mark the Great Victory, with the Racing Clan club's leaders stating that they wish to stay away from politically charged events.

© Sputnik / Vasiliy Batanov
Unlike Americans Russian Bikers Going to Europe Unarmed - Czech Media
Over the past week, Poland has seen an intense debate about whether or not the Night Wolves should be allowed to ride through the country on their way to Berlin. Activists, media and even politicians have stepped out against the affair, while others, among them with the country's bikers, stepped out to defend the Russians.
...
Reddit
Google+
Blogger
Pinterest
StumbleUpon
Telegram
WhatsApp
568
Topic:
Russian Bikers' Victory Day Ride to Berlin (29)