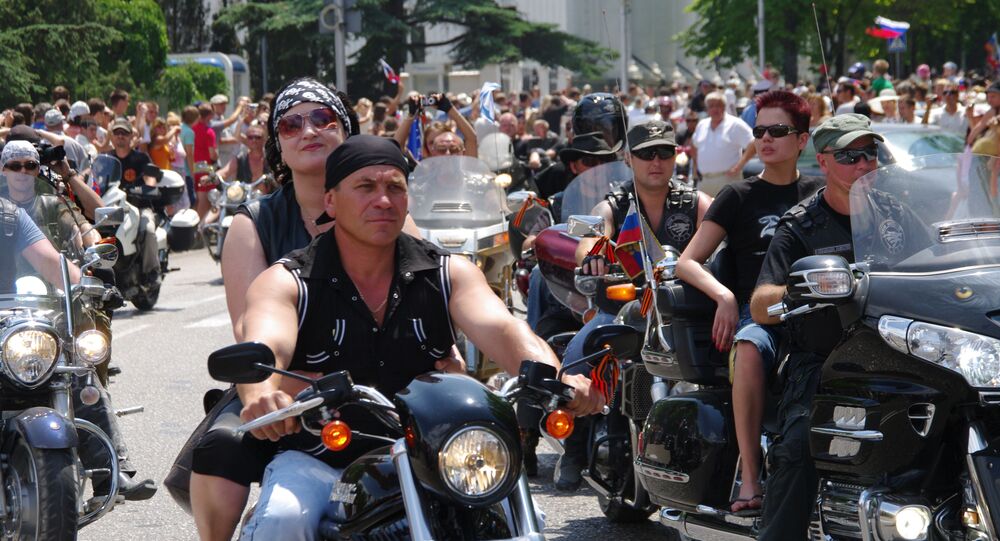 In contrast to Poland, where a national debate on whether to let a Russian motorcycle club ride through the country on their way to Berlin to celebrate Victory Day now verges on national hysteria, Czechs have reacted to the whole affair much more calmly.

© Photo : Courtesy of "Night Wolves"
Poland's PM at Odds With Country's Bikers Over Night Wolves V-Day Ride
Observing Czech social media commentary, most people seem to look on in amusement as their Polish neighbors' media tear their hair out in panic over the Russian bikers' planned victory ride. As for Czechs, most seem to be of the attitude that if the Russians behave themselves and respect the country they're riding through, they should be allowed to ride in peace.

Speaking to Czech Sputnik, a representative of the legendary motorcycle company Jawa Moto noted that the Russians should be let through the Czech Republic, on the condition that they respect the law.

"Of course, bikers have a tendency to be extreme. But if they calmly join the flow of traffic on the roads, do not behave in a provocational manner at bus stops or restaurants, and abide by the laws of the country they are in, there is no reason for concern," the company rep noted.

"These are normal bikers who want to lay flowers at memorials to Soviet soldiers, and [we should] let them. But again, if their plans include some demonstrations of a political nature, if they break the law or disobey the rules of the road, they should know that they will be met with the appropriate response, both by the police and the public," the rep added.

© RIA Novosti . Vasiliy Batanov
Poles Split Over Letting Russian Bikers Pass Through on Ride to Berlin
Czech Sputnik recalls that the Czech Republic has had experience with Russian bikers before. Two years ago, bikers from Russia's Jawa Motorcycle Fan Club arrived in Týnec nad Sázavou, the company's hometown from Novosibirsk, Siberia to celebrate the 135th anniversary of the birth of Jawa Moto founder František Janeček, an important figure in the development of the Czech motorcycle industry. During the Soviet period, Jawa was considered among the most prestigious and best motorcycles money could buy. The Russians joined their Czech counterparts in a ceremonial parade on the town's central street, without incident.

Czech social media is full of commentary about the planned drive by the Russian bikers through the Czech Republic. Many compare the event to the recent drive by the American convoy through the country. Local news hub Novinky.cz quoted one Facebook user, who noted:

"I hope that our government and the police will welcome the Russian bikers the same way they did the American convoy, and provide it with accommodation, food, accompaniment and all the other honors that should go to representatives of the people who freed us from fascism and whose soldiers laid down their lives for us."

Twitter users seemed similarly open to the Russians' passing through:

"The night wolves are bandits? This episode of propaganda war already smacks of spectacle."

"The Night Wolves seem like a a descent group!"

"Via news hub lidovsky.cz: The [Facebook] page "Welcome Night Wolves Biker Club in the Czech Republic," has already gathered nearly a thousand supporters [ed. By the time of this writing, it's now over 2,300]."

Commenting on the whole affair, Czech Sputnik noted that "it's obvious what's behind this whole campaign. The Night Wolves and their leader Alexander Zaldostanov support the politics of the Russian president, and approve of Crimea's decision to join Russia. What, should Europe only allow in people who have the opposite opinion?"