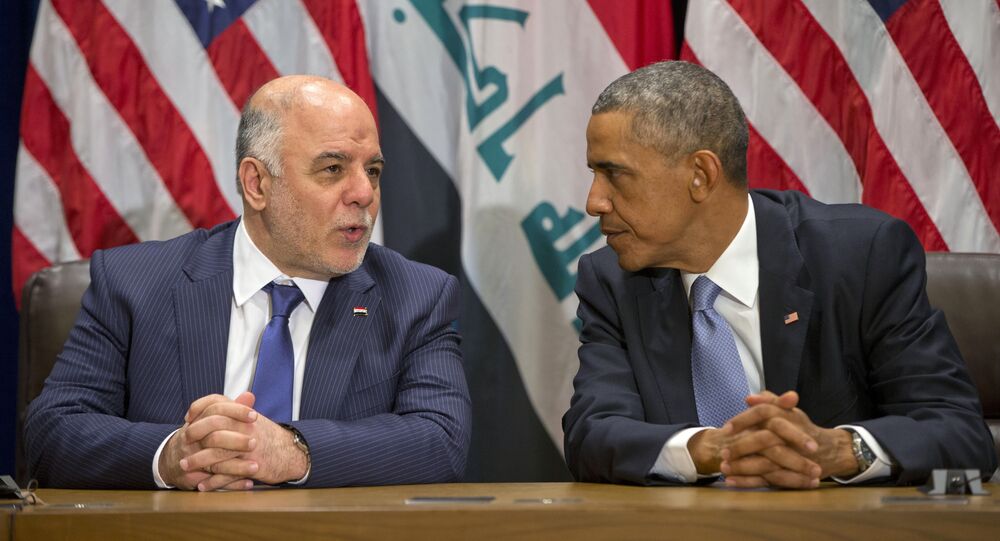 Obama Agrees to Help Iraq With Fight Against Islamic State

The White House announced that Obama pledged additional help to Iraq in the fight against ISIL as well as on other key issues during his meeting with Iraqi Prime Minister Haider Al-Abadi in Washington.

WASHINGTON (Sputnik) — US President Barack Obama pledged additional help to Iraq in the fight against the Islamic State (ISIL) as well as on other key issues during his meeting with Iraqi Prime Minister Haider Al-Abadi in Washington, DC, the White House announced in a statement on Tuesday.

“President Obama and Prime Minister Al-Abadi reviewed progress in the campaign to degrade and ultimately destroy ISIL [Islamic State of Iraq and the Levant],” the White House statement read.

© Sputnik
US to Provide Extra $205 Mln in Humanitarian Aid to Iraq
President Obama vowed to support the Iraqi Security Forces and the tribal engagement initiatives with US training and equipment to further degrade and ultimately destroy the ISIL, according to the White House.

Abadi asked Washington for “long term” help in fighting the ISIL militants, and stressed the importance of having more tribal fighters to combat ISIL.

“The Prime Minister emphasized that the Government of Iraq has zero tolerance for human rights abuses and requested assistance from the United States and the coalition to enable immediate and long-term stabilization in areas liberated from ISIL,” the statement said.

Meanwhile, the US-led international coalition against the ISIL has been carrying out airstrikes against the militant group in Iraq since August 2014, and in Syria since September 2014.

Obama and Abadi also discussed the challenges that Baghdad faces amid the decline in oil prices, the humanitarian crisis of over 2.6 million displaced Iraqis as a result if ISIL’s takeover of parts of Iraq, and the ongoing fight against ISIL terrorists.

Abadi stressed his plan is to improve Iraq’s energy infrastructure to fight corruption and “wasteful spending” in order to help the country’s economy.

“The two leaders agreed that international support for Iraq’s fight against ISIL could be leveraged toward enhancing Iraq’s integration with the global economy,” the White House statement added.

© AP Photo / Khalid Mohammed
Iraq Should 'Disband Abusive Militias' to Receive US Aid - HRW
Abadi also told Obama that his “top priority” is to pass legislation while continuing to try to implement his national program following the formation of the new Iraqi government.

“The President [Obama] welcomed the progress that has been made to date[on the implementation of new Iraqi government], and called on all political blocs to make the compromises necessary for full implementation of the national program,” the statement read.

The meeting between the two leaders comes after they held a bilateral meeting for the first time at the UN headquarters in New York shortly after Abadi assumed office in September 2014.

“As of this week, an additional 50 MRAPs with mine rollers will be on their way to Iraq,” the release read.

The White House explained that the United States has already delivered 250 MRAPs to Iraq in December 2014 and in January 2015 as a critical component in the fight of the US-led Coalition against ISIL.

The United States also continues to work on delivering F-16 fighter aircraft to the Iraqi government, and there are currently 30 Iraqi Air Force pilots in the training pipeline, the White House added.

The US-led Coalition of over 60 nations continue has carried out airstrikes against ISIL in Iraq and Syria, while the Iraqi and Syrian forces, allied with Kurdish forces, fight ISIL on the ground.

In January 2015, al-Abadi praised the US-led Coalition’s air campaign against the ISIL, but said that the international community was stalling in its commitments to train and equip Iraq’s ground forces.