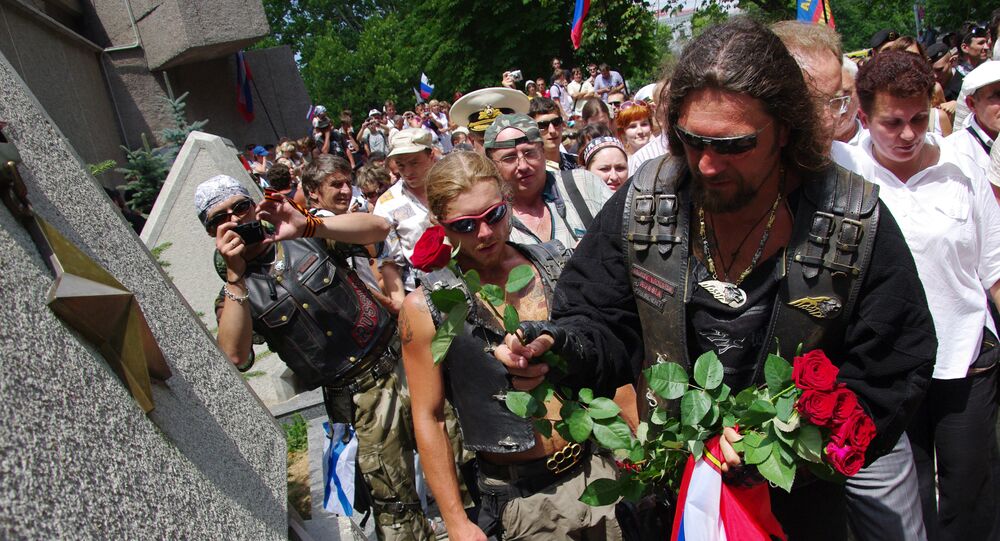 Surveys have found the people of Poland divided over whether or not to allow a Russian motorcycle club through Poland on their way to Berlin for Victory Day celebrations.

© Sputnik / Evgeny Biyatov
Poland Panicked by Proposed Russian Biker V-Day Ride to Berlin
A Russian motorcycle club called the Night Wolves has planned out a 6,000 kilometer tour, set to begin April 25 in Moscow, and riding through Belarus, Poland and the Czech Republic before arriving in Germany in time for May 9.

But when a group of Polish social media activists found out about the bikers' plans, they organized a Facebook protest group vowing to stop the Russians from entering the country. The activists soon gained the support of much of the media, with several politicians calling on the Foreign Ministry and the country's security services to refuse the bikers entry. The affair soon turned into a nationwide scandal, with Poles divided over whether or not to let the Russians in.

A recent poll by local sociological research company Millward Brown for Polish television network TVN found that 52 percent of Poles are now dead set against the Russians being allowed passage through the country. Asked the question whether "authorities should let the Night Wolves travel through Poland," 26 percent of those surveyed responded "definitely not" with another 26 percent answering "probably not."

A look through Polish social media and online newspaper commentary sections only reinforces these divisions. Some Poles showed support for the initiative to stop the Russian bikers, talking about the group's connections to Vladimir Putin, recalling the Soviet Union's crimes against Poland, and repeating conservative media claims that the bikers are a "criminal organization" and "a threat to Poland."

Others however, refused to join in the hysteria. Some were confused about why the issue had blown up into such a huge scandal in the first place:

"@pawelkowalpl [Polish politician and member of the EU Parliament] really believes that the Night Wolves can reveal Poland's weakness? For me, the national debate about this gang is an expression of weakness."

"So it turns out that we are offended that the Night Wolves are going to insult us, but aren't indignant over the fact that Kaczynski offends half of Polish society?"

Others pointed out that Polish bikers have organized a similar event, known as the Katyn International Motorcycle Rally, for over a decade. The annual 6,000 kilometer tour winds from Poland to the Russian region of Smolensk, where the bikers pay tribute to the Polish officers killed in Katyn in 1940 by Soviet security forces:

"The Night Wolves know that Polish riders annual travel to Russia on the 'Katyn Raid'. Every stick has two ends."

Others voiced their fears about what would happen if the Russian bikers were attacked after entering Poland:

"If some messed-in-the-head dunces attack the Night Wolves, it will mean an even greater shame than not allowing them into Poland."

An interesting debate also broke out over the matter on the comments section of liberal newspaper Gazeta Wyborcza. A user named Jm13 indignantly wrote: "Are we a democracy or not? If they aren't going to break the law, why must we ban them from coming?" The user also reminded his fellow readers about the Katyn rally: "Why don't the Russians get up in arms about our 'Katyn Ride'."

Another user named Pwiejacz simply called for fairness: "They have received visas, and this means they have a right to enter Poland. But do they have a right to carry out a demonstration here? I doubt it. If during their drive through they do not carry out any mass protest actions, and don't break the rules of the road, let them come through."

Wan20 echoed Pwiejacz's comments, noting: "If they have visas, and they abide by the traffic code, let them ride. And when they go through cities, let the police escort them. Our guys ride to Katyn. If this mob of so-called patriots succeeds in preventing them, we won't be going to Katyn either."

A user named Dumlat asked for calm: "Calm down with this Russophobia. Let them drive through in peace, and nothing will happen. There's no need to provoke them, and then everything will be alright."

Meanwhile, a user named Only.devil, commenting on the fact that the Night Wolves' leader, Alexander Zaldostanov, has already been banned from entering the United States, asked "What are we now, an official protectorate of the US, or can we count on at least some level of independence?"

© AP Photo / Alik Keplicz
Thousands of Poles to Protest Against Warsaw's Support for Ukraine
A user named Conduma rounded out the debate, voicing his outrage over Ukrainian nationalists' present influence in Poland: "Ukrainian radicals in Poland are trying to organize a conflict which can grow into a tragedy. They are trying to draw Poland into a war with Russia. These include politicians like Pawel Kowal, [elements of] the Ukrainian minority and more than 23,000 Ukrainian students studying for free in Poland."

Commenting on the influence presently held in Ukraine by supporters of Stephan Bandera and the Ukrainian Insurgent Army, accused of the murder of up to 130,000 Poles during World War II, Conduma noted that "it is a rare case when a government supports its enemies, supports those who create their identity based on the glorification of women and children, enemies who assist the tormentors of their own country. Not to speak of the fact that [these] Ukrainians have territorial demands on a large part of Polish territory."

Overall, despite the fact that a sliver of a majority of Poles now seem to support government action in preventing the Night Wolves' victory ride, it is also obvious there are many people in Poland stepping out against turning this symbolic ride as a tribute to victory over fascism into a traveling political circus. As Zaldostanov noted in his commentary for Polish Radio, his group remembers the brave Poles who fought alongside the Red Army, first in liberating Poland and then in fighting all the way into Berlin.

Thousands of Poles to Protest Against Warsaw's Support for Ukraine