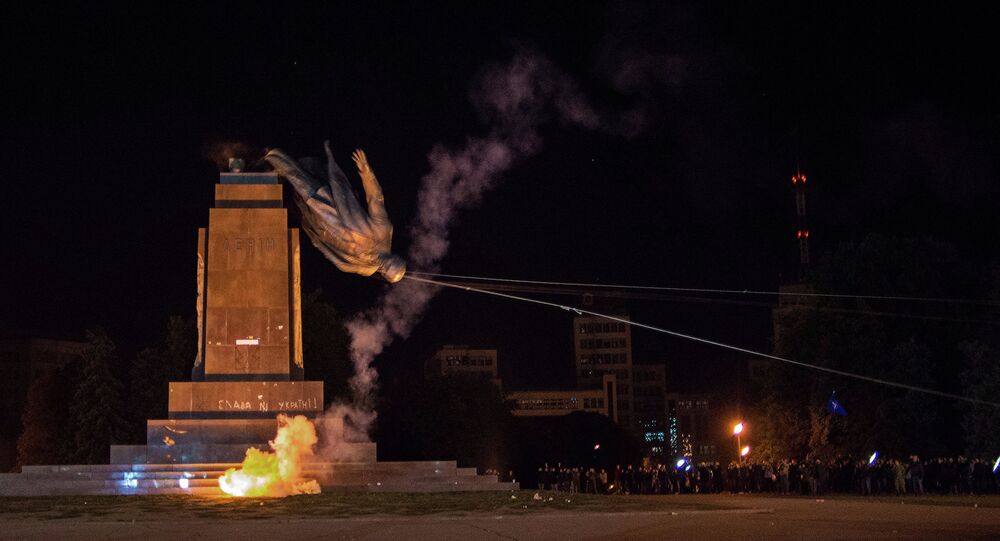 Deputies of the ruling coalition in Ukraine's parliament have begun second-guessing their recent decision to vote to ban communist symbols and propaganda, while local political scientists don't rule out that the country's president may not sign the bill into law, Ukraine's Vesti has reported.

© AP Photo / Sergei Poliakov
Ukraine Rushes to 'Ban Communism' in Time for 70th Anniversary of Victory Over Nazism
Following the rush to pass the law last week, Ukrainian media have begun focusing on the details of the 'decommunization' initiative, and especially its provision about the renaming of cities, towns, villages and streets, which it is estimated will cost local budgets several billion hryvnia. With nearly a dozen cities now up for renaming, so too are thousands of streets across the country's cities, towns and villages.

Vesti notes that MPs from the country's governing coalition have begun to reinterpret some of the law's basic provisions as recommendations rather than hard and fast laws, despite the law's clear points about the necessity to rename locations named after the old communist regime.

Viktoria Syumar, a deputy from Prime Minister Arseniy Yatsenyuk's Popular Front, has stated that the renaming provisions of the law are 'advisory in nature', given that place naming is a local matter. Poroshenko Bloc MP and Parliamentary Secretary of the Committee on Local Government Alexei Goncharenko agrees, stating: "I believe that with regard to the renaming of cities and streets, this law carries an advisory character. It allows for local authorities to rename cities. Now, they will have to go through public hearings, on the basis of which local authorities will decide whether to keep the old names or not. If they decide to preserve them, so be it."

The governing coalition's flip-flopping aside, local authorities have already begun pulling their hair out thinking about the cost of the renaming, along with the bureaucratic mess millions of people, businesses and organizations will cause when they appear in government offices requesting new, corrected documents.

© Sputnik / Pavel Palamarchuk
'Political Terror': Greek Communists Slam Kiev for Glorifying Nazi Gangs
In the eastern city of Kharkov, a commission by local authorities has determined that nearly every ninth place name will have to be changed, including 200 streets and squares, five city districts and several metro stations. Locals are concerned that the renaming process could get bogged down by financial problems and bureaucracy and take over a decade to actually implement.

Former Minister of Finance Alexander Klymenko complains that the project will cost billions. "In a country with a budget deficit of around $9 billion US, a useless law has been adopted, the cost of which, according to conservative estimates, is estimated at 5 billion hryvnia [around $214 million US]."

Meanwhile, Ukrainian political scientist Andrei Zolotarev has estimated that the place name changes will affect "a minimum of 2 million people, across 250 cities, towns and villages." Zolotarev complains that while "lawmakers have announced that it will be free…who then will pay for the millions of reissued documents? It will be money taken from pensions, salaries, and road repairs –millions and billions worth. If authorities want to speedily get over the totalitarian past, they should first show a path to a better future."

Local authorities have been thinking of clever ways to avoid the headaches associated with the renaming initiative. The mayor of the port city of Ilyichevsk now says that the city, founded in 1952, is actually named after the prophet Elijah (Ilya in Ukrainian), and not after Lenin's patronymic. In Dnepropetrovsk, the industrial giant on the Dnepr, authorities are at a loss over what the city, renamed by the Bolsheviks in 1925, will be renamed to. Its previous name was Yekaterinoslav, after the Russian Queen Catherine the Great. And before that, the city was called Novorossiysk, literally meaning 'New Russia City'.

Will the Law Cause Further Political Unrest in the East?

Shortly after the passage of the law, administrators and locals in eastern Ukraine have begun complaining about unknown masked persons taking down monuments. The management of Kharkov's famous Kharkov Tractor Plant wrote an angry press release last week about "masked vandals" demolishing a monument to Soviet politician Sergo Ordzhonikidze located at the entrance to the plant under the cover of night, which plant officials said amounted to "spitting on Ukraine's history and into the souls of the [plant's] employees."

© AP Photo / Str
Italian Communists Scold 'Revisionist' Kiev for Equating Communism, Nazism
Political scientist Vadim Karacev considers that the decommunization bill has been "a risky undertaking, politically speaking. And I can't rule out that the president may not sign it, or recommend corrections. However, even if he does sign it, I don't think that this will lead to massive unrest, even if the example of Donbass showed what such initiatives can lead to. It's another matter that the decommunization effort will further weaken the already damaged authority of the governing parties in the south and east of the country, and local elections in these regions will give more votes to the opposition."

Nonetheless, current Poroshenko Bloc Leader Yuri Lutsenko, the son of the former First Secretary of the Rivne Regional Committee of the Communist Party in Soviet days, believes that the passing of the law was the right thing to do. "From now on, children will not ride on a carousel in a park named after a cannibal; students will not learn at an institute named after a terrorist; couples in love will not agree to a date at a meeting named after a murderer…Get rid of the streets of all the red devils!"