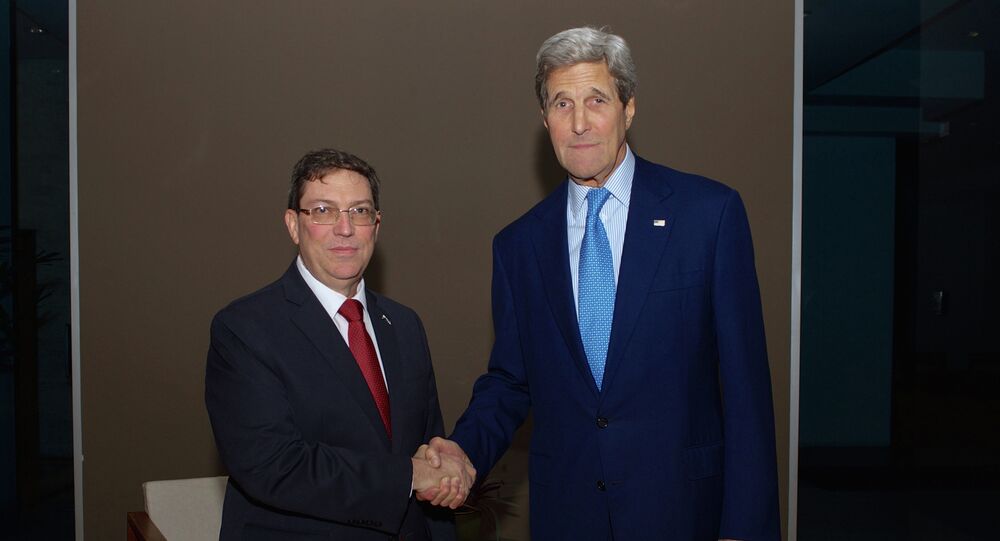 © REUTERS / Jonathan Ernst
US May Exclude Cuba From Terrorism List in ‘Coming Days’
MOSCOW (Sputnik) — The restoration of relations between the United States and Cuba will be a slow process, US Secretary of State John Kerry said Sunday.

“The president has courageously decided to change a policy that doesn’t work and to move us down a different path. It will begin slowly. The first thing is diplomatic relations, then we will move towards a process of normalization,” Kerry said in an interview with ABC.

Eased travel restrictions will increase the Cuban people’s opportunity for expression and exchange of views with US citizens, which will “promote a transformation over a period of time,” according to the politician.

© AFP 2021 / YAMIL Lage
Obama, Castro to Assess Progress in Normalization of US-Cuba Relations
“We discussed the modalities of the diplomatic engagement, and then of course the [US] president met with Raul Castro, the [Cuban] president, and we now go forward from there,” he said.

Obama and Castro met on the sidelines of the seventh Summit of the Americas, a triennial meeting between political leaders of the Western Hemisphere, earlier in the week. Cuba had long been excluded from these summits by US initiative.

In December 2014, Obama announced his intention to normalize US-Cuba relations, which hit rock bottom following the 1959 Cuban Revolution. The US president said he wanted to open an embassy in Havana and to ultimately lift trade and travel embargo on Cuba.

US May Exclude Cuba From Terrorism List in ‘Coming Days’

Historic Meeting Between US and Cuba: New Period in Countries’ Relations