Contact Group on Ukraine to Have Video Linkup April 14

The participants of the linkup will discuss the creation of working groups, withdrawal of heavy weapons and prisoner exchange.

© REUTERS / Marko Djurica
Donetsk Reports 74 Ceasefire Breaches by Kiev in 48 Hours in East Ukraine
KIEV (Sputnik) – A video linkup of the trilateral Contact Group on Ukrainian reconciliation will take place on April 14, a spokesperson for the Ukraine's negotiator said Saturday.

"On April 14, a video linkup of the participants of the trilateral Contact Group with the representatives of DPR [Donetsk People's Republic] and LPR [Lugansk People's Republic] will take place," Dariia Olifer, a spokesperson for Ukrainian ex-president and reconciliation negotiator Leonid Kuchma, told RIA Novosti.

According to Olifer, the participants of the linkup will discuss the creation of working groups, withdrawal of heavy weapons and prisoner exchange. 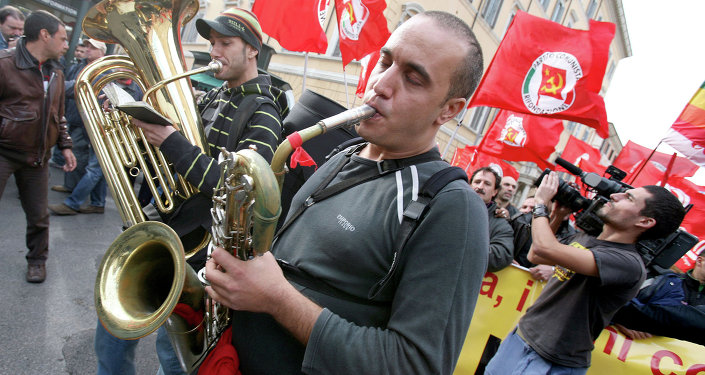 The trilateral Contact Group comprises representatives from Kiev, Moscow and the Organization for Security and Co-operation in Europe (OSCE). The group holds regular talks with representatives of self-proclaimed Donetsk and Lugansk People's Republics to facilitate a diplomatic solution to the conflict in southeastern Ukraine.

In mid-February, the leaders of Russia, Ukraine, France and Germany agreed on the steps to settle the Ukrainian conflict that include the pullout of heavy artillery from the line of contact, the all-for-all prisoner exchange, as well as the ceasefire, among other measures.

Erasing Own History: Soviet-Era Monuments Torn Down in Ukraine (VIDEO)