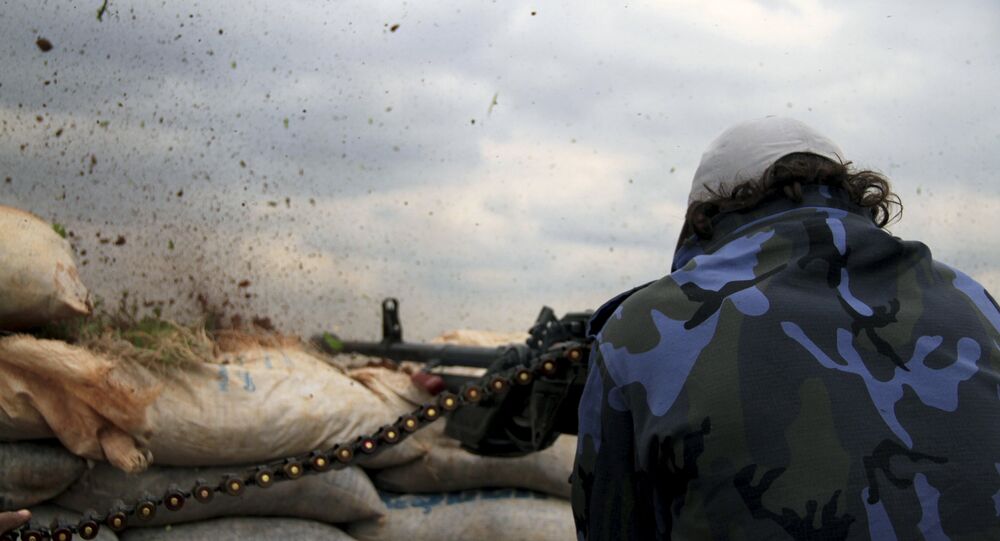 Syrian envoy to the UN underscored his country's opposition to funding and providing logistical support to extremist factions by foreign powers.

© AP Photo / Edlib News Network ENN, File
Syria Proposes 12-Point Plan in Moscow for Fight Against Terrorism
MOSCOW (Sputnik) — Lack of agreement on who to include on the list of state sponsors of terrorism prevented the adoption of a 12-point program proposed on the last day of intra-Syrian talks, a Syrian government envoy to the UN Bashar Jaafari said during a press conference in Moscow on Friday.

"We were unable to come to a common understanding over who to include in the list of state sponsors of terrorism, which is why we developed the term 'regional forces supporting terrorism'."

"It is illegal for armed groups to be trained and sponsored by countries like Saudi Arabia, Qatar, Iran, Turkey, Israel, Jordan and others."

Jafari added that delegates representing Syrian leadership and its fragmented opposition failed to unanimously adopt the 12-point program despite having agreed on all but two of the points.

© AFP 2020 / VASILY MAXIMOV
Second Round of Intra-Syrian Talks in Moscow Positive - Opposition
The latest round of peace talks in the Russian capital is the second attempt to negotiate peace in conflict-ridden Syria. The last leg of intra-Syrian talks took place in late January and yielded the so-called Moscow Principles outlining a political platform for national reconciliation.

Several extremist groups, including the Islamic State and the Nusra Front, have taken advantage of the Syrian conflict dating back to civil unrest in 2011. ISIL in particular has captured vast parts of the country and established a violent form of fundamentalist rule in territories under its control as far back as 2012.

The United Nations estimates over 220,000 people have died in ongoing fighting and millions more have been displaced.

No Agreement to Improve Trust Reached During Syrian Talks in Moscow

Lavrov Calls for Urgent Measures to Defend Syria From Terrorists