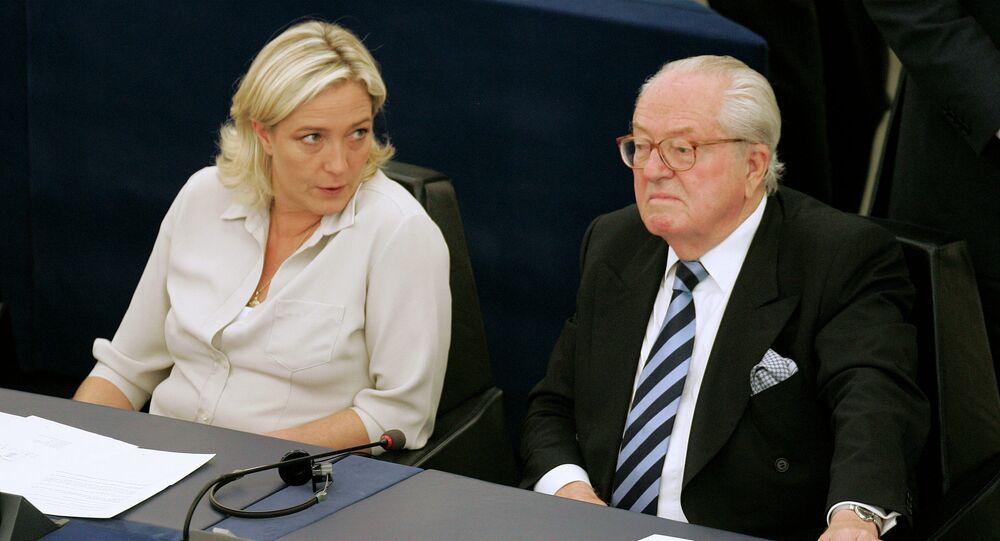 © REUTERS / Robert Pratta
Right-Wing Le Pen Could Become French President in 2017 - Advisor
MOSCOW (Sputnik) — The resignation of French National Front founder Jean-Marie Le Pen would be a “most preferable” solution to overcome bitter differences within the party over his recent remarks about the Holocaust, party vice-president Florian Philippot said Thursday.

France’s far-right Front National has been plunged into a feud between its president, Marine Le Pen, and her 86-year-old father and party founder Jean-Marie Le Pen, after he made comments in an interview with a far-right newspaper suggested that Nazi gas chambers, used to kill Jews in the Holocaust during second world war, were “merely a detail in the history.”

"It’s obvious, that he [Jean-Marie Le Pen] receded from his position. What's the point of staying in the party whose fundamental principles you don’t share? The most preferable solution [would be] his resignation and expulsion from the party,” Florian Philippot was quoted as saying by the Les Echos.

© AFP 2020 /
Duelling Dynasties, Power Games and Dirty Politics
Marine Le Pen accused Jean-Marie Le Pen of inciting racial hatred over his Holocaust remarks. These antisemitic comments could sabotage the party's efforts ahead of 2017 presidential race as Marine Le Pen is seeking to make the party more appealing to mainstream voters by ridding it of extreme rightists.

The question of Jean-Marie Le Pen's membership in the National Front party, according to Marie Le Pen’s assistant, will be put to vote at the party's executive board session Thursday afternoon in spite of denials by the party's press office that a session was held. Earlier this week, Marine Le Pen warned that her farther had been politically discredited and would be prevented from standing in regional elections this year.

France will vote in presidential elections in 2017, and Marine Le Pen is expected to make a strong bid after her Front National Party got second place in the second tour of departmental elections in France, behind former President Nicolas Sarkozy's conservative UMP party.