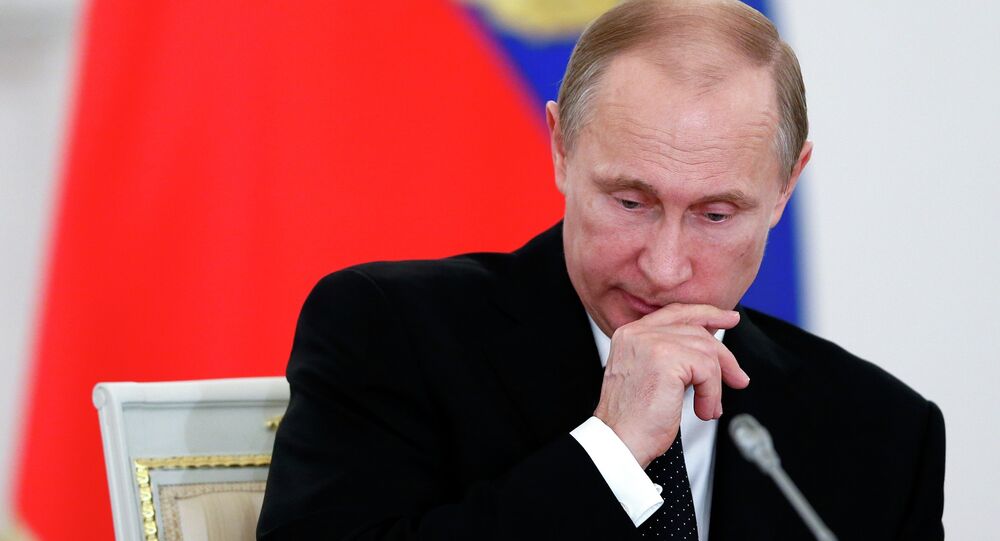 Polling conducted by independent polling and sociological research firm Levada Center has found that Russians' views toward President Vladimir Putin have changed significantly over the past year.

© Sputnik / Vitaly Belousov
None of the Above:Poll Shows Ukrainians Don't Trust Leaders, Parties, Media
The polling, released Friday, shows that nearly half of all Russians, 49 percent, believe that the president's greatest accomplishment has been his role in returning Russia to the status of great power.

The multiple possible answer polling finds that the president's other most cited accomplishments include the stabilization of the situation in northern Caucasus (34 percent of respondents), the curbing of separatism and saving the country from collapse (33 percent), the rise of pay, pensions and benefits (29 percent), and his success in dealing with the aftermath of the 2008 economic crisis (29 percent).

When it comes to the top five things the president hasn't been able to accomplish, 39 percent of respondents cited his inability to assure a just distribution of income in the interests of ordinary people, 34 percent the failure to return the resources and amenities lost by ordinary people in the course of reforms, 23 percent the incapacity to overcome the present economic crisis, 22 percent the failure to ensure the strengthening of law and order in the country, and 15 percent the inability to raise pay, pensions, and benefits.

Levada's multiple possible answer polling also found that among the qualities people found most attractive in the president, 41 percent said it was his 'energy, decisiveness, and strength of will', with 40 percent citing his 'experience'. Meanwhile, 25 percent cited his 'ability to lead', 23 his 'defense of state interests', 23 percent his 'visionary leadership', and 17 percent his role in ensuring 'stability in the country'.

Interestingly, the importance of the president's personal appearance among his top personal qualities has fallen from a maximum of 18 percent during the first five years of his administration to 6 percent in this year's results. Political scientist Dmitri Oreshkin told Russian business news service RBC that the decline has to do with shifting expectations among the Russian people. In 2000-2005, people considered it important that Putin was a young man who led a healthy lifestyle, didn't drink, had experience abroad, and was associated with democratic activist Anatoly Sobchak.  Shift to the present, and Russians now look at the president as a strong leader who managed to save Russia from the brink of complete destruction. As a result of this, and the fading of the public memory of the malaise of the Yeltsin era and Yeltsin's own personal image, the relative importance of Putin's appearance in the public mind has declined.

© Sputnik / Evgeniya Novozhenova
68% of Russians Think Russia Plays Major Part in Global Affairs - Poll
Regarding rumors, spread around the globe, about the president's health, 51 percent stated that this kind of information is a private matter, while 39 percent insisted the contrary, stating that they had a right to know everything about the health of the head of state. Regarding their own personal estimate of the president's health, 55 percent of respondents answered either 'good' or 'very good', with 24 percent answering 'average', and slightly more than 1 percent answering 'bad' or 'very bad', with 20 percent finding it difficult to say.

Levada Center polled 1,600 people across 134 regions in March 2015. The results have an estimated margin of error of no higher than 3.4 percent.