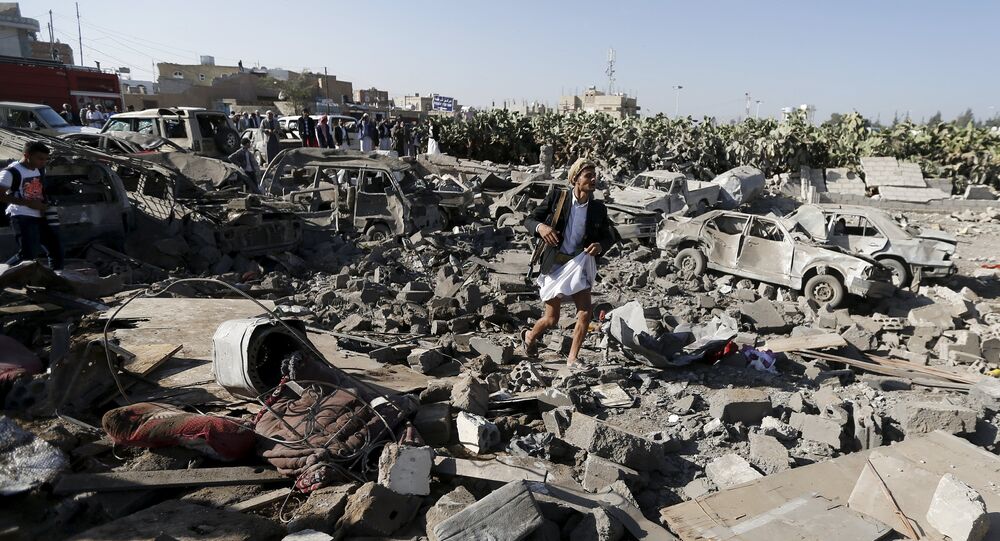 On Wednesday, a coalition of Arab states led by Saudi Arabia started conducting airstrikes against Houthi rebels, who currently control large parts of Yemen, including the capital Sanaa.

"Vladimir Putin and Hassan Rouhani also exchanged views on the rapidly deteriorating situation in the Republic of Yemen. The Russian side stressed the importance of an immediate cessation of hostilities, and of efforts, including within the UN, to develop options for a peaceful settlement of the conflict," the statement reads.

© Sputnik / Faisal Al Shabibi
Thousands Protest Against Saudi Airstrikes in Yemeni Capital
"The discussion of this issue [during a phone call between President Putin and Iranian President Rouhani] clearly shows that Moscow is seriously concerned over developments in the situation in Yemen," Kremlin spokesperson Dmitry Peskov told reporters.

On Wednesday, a coalition of Arab states led by Saudi Arabia started conducting airstrikes against Houthi rebels, who currently control large parts of Yemen, including the capital Sanaa. Several other nations, including Bahrain, Qatar, and Egypt, have joined the operation.

The Gulf nations claim the campaign is a response to a request of Yemen's ousted president Abd Rabbuh Mansur Hadi.

© REUTERS / Khaled Abdullah
Death Toll Reaches 65 in Coalition's Ongoing Airstrikes in Sanaa
Recent media reports indicate that Hadi left the seaport city of Aden on Thursday and stopped in Saudi Arabia on the way to an Arab League summit in Egyptian city of Sharm el-Sheikh on March 28-29.

Thousands of people gathered in the streets of Sanaa on Thursday protesting against the coalition's actions.

A local source told Sputnik earlier in the day that 65 people had died in the coalition’s attacks on the capital.

Russia Calls on Warring Factions in Yemen to Refrain From Violence