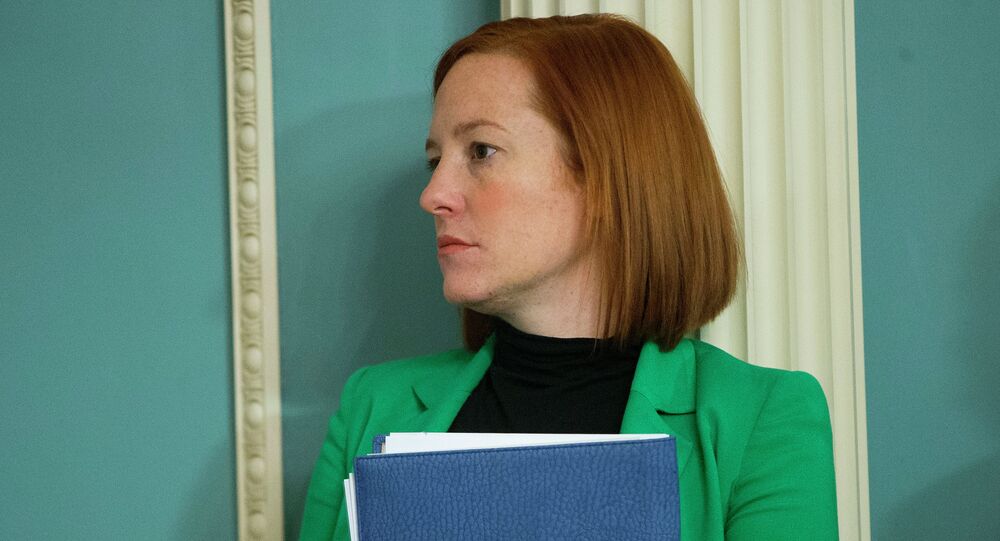 US to Send Weapons to Kiev if Minsk Agreements Fail - Psaki

The United States could supply Kiev with 'not offensive' weapons if the Minsk agreements on Ukrainian reconciliation fail, US Department of State spokesperson Jen Psaki said Wednesday.

© AP Photo / Evgeniy Maloletka
US Policy on Ukraine Unchanged After House Resolution on Lethal Aid - Psaki
MOSCOW (Sputnik) — The weapons the United States would provide would be defensive and not offensive, Psaki stressed  in an interview with Dozhd television channel.

On Monday, US House of Representatives passed a resolution calling on US President Barack Obama to send lethal aid to Ukraine. Washington has not made a decision on arming Ukraine yet.

Moscow has repeatedly stressed that providing Kiev with weapons will exacerbate the Ukrainian crisis, adding that it goes against claims by Washington of its commitment for a peaceful resolution of the conflict. A number of European countries stated in recent weeks that they would not be sending lethal aid to Ukraine.

Relations between Russia and the US

The United States does not consider Russia an opponent and will not compare it to the Islamic State militant group, US State Department spokeswoman said.

© REUTERS / Arnd Wiegmann
Combating Russian ‘Hybrid Warfare’ Top Priority - NATO Secretary General
When asked about the threat posed by the Islamic State versus that allegedly posed by Russia, Psaki stated that she was "certainly not going to draw comparisons" between Russia and the jihadist group."

"ISIL [Islamic State] is a terrorist organization, opposed by both the United States and Russia, as well as many other countries around the world," the spokeswoman stressed.

Psaki further noted that the United States does not consider Russia an opponent.

Last November, US President Barack Obama called Russia's alleged aggression toward Ukraine a "threat to the world," while speaking at a G20 summit. In his previous speech at the UN General Assembly session September 2014, Obama listed Russia among the gravest global threats, along with the Ebola virus and the rise of terrorism in Iraq and Syria.

US Department of State spokeswoman Jen Psaki did not watch the documentary “Crimea. Way Back Home,” as she did not have enough time for that, she said.

Psaki explained that could not watch the movie as it is quite long.

“Crimea. Way Back Home” was released by Rossiya-1 TV channel on March 15. The running time of documentary is 145 minutes, including two interviews of Russian President Vladimir Putin telling about the events prior to the Crimean reunification with Russia.

On March 16, 2014, Crimean residents’ absolute majority of 96 percent voted for rejoining Russia on referendum following a declaration of independence from Ukraine.

US wants Edward Snowden back

© AP Photo / William Kratzke
US Policies Divorced From Reality Since 9/11 – Edward Snowden
Jen Psaki also mentioned NSA whistleblower Edward Snowden in the interview, saying that the United States would be "happy" to see him back in the country.

Edward Snowden is wanted in the United States on charges of espionage and government property theft. In 2013, Snowden leaked information about surveillance operations of US authorities against US citizens and international leaders.

There is "no secret" in the fact that the United States would be glad to see Snowden return, Psaki said. There, the former NSA contractor, who is charged with violating the Espionage Act and stealing government property, would appear before a "just court," she stated.

Psaki made her comments discussing US President Obama's cancellation of a meeting with his Russian counterpart Vladimir Putin after Russia granted Snowden asylum.

US mistakes in Iraq

Jen Psaki also noted that the top US officials have admitted the errors Washington made in Iraq.

Both US President Barack Obama and Secretary of State John Kerry have spoken about errors made in Iraq, Psaki said. The US government made reviews of mistakes it made with, in particular, espionage programs and made an effort to resolve them, the spokeswoman stressed.

According to Psaki, one of the things the United States should have done in Iraq was paying more attention to Sunni Muslims, as well as trying to decrease religious tensions.