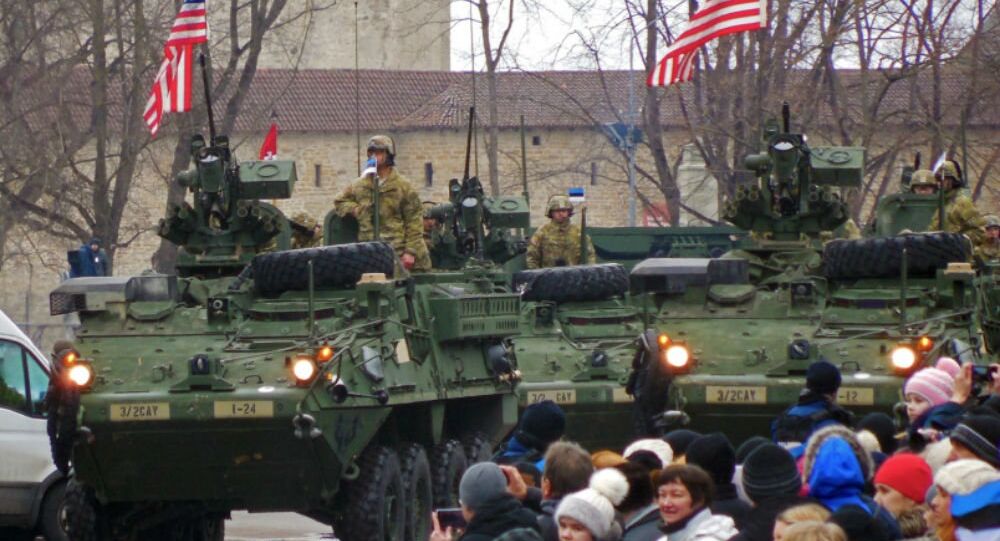 The US says that it does not consider NATO drills along Russia's borders to escalate tensions in the region, while Russian drills within Russia itself do, RT has reported, citing State Department Spokesman Jeff Rathke.

PAUL NADOLSKI/US ARMY
US Armored Columns March Through Six Eastern European Countries
Speaking at the State Department's press briefing on Friday, RT journalist Gayane Chichakyan asked Rathke about the double standards the US practices when it condemns Russian exercises inside Russia for escalating tensions while simultaneously conducting its own exercises with NATO member countries close to the Russian border.

"The US is beginning military exercises in Estonia," Chichakyan began. "I'm wondering: Why is it that when Russia is carrying out exercises, it's [considered] suspicious, [and] 'undermines peace'," but "when the US does it, it's exclusively for peace and never undermines anything?"

With Rathke stating at first that he was unsure what Chichakyan was referring to, the journalist clarified by noting that the US makes such allegations against Russia all the time, "the most recent" being State Department Spokesperson Jen Psaki's statement that "Russian exercises in Crimea would undermine a diplomatic, peaceful resolution to the crisis…We heard a similar reaction over Russian exercises in other parts of Russia, close to Western borders; there's always a suspicion and accusations."

Rathke responded by stating that Chichakyan was "distorting what's been said from this podium by my colleagues and by the US government. We have consistently said that we recognize the need for routine military training activity, and we say that it should be consistent with international law, and that it should be conducted with due regard for the rights of other nations and the safety of aircraft and vessels. That's been our position consistently, and I would urge you to go back and review the record before twisting what it is we've said."

But the reporter wouldn't let the official off the hook that easily, repeating that "we always hear a suspicion and criticism of Russian exercises somehow undermining stability in the region. But when the US is carrying out exercises, thousands of miles away from home, near Russian borders, that's fine. Russia does that at home and that's not fine. Do you see an inconsistency?"

With Rathke responding that he had already addressed the question, AP's Matt Lee jumped in to back up his colleague, noting that "the problem is that you were [earlier] critical of Russian exercises that were 'in the general vicinity of the Ukrainian border' inside Russia. You said it contributed to unease and instability during the crisis in Ukraine."

Forced to backpedal, Rathke noted that "that's been in reference to a specific conflict zone," adding that "I think that the question was much broader, and suggesting that we were criticizing or denying the ability of Russia to conduct military exercises anywhere."

© AP Photo / Mindaugas Kulbis
Finnish Foreign Minister Frustrated Over NATO’s ‘Show of Force’ in Baltic
Lee retorted, asking Rathke whether the State Department had asked "the Vietnamese to stop refueling Russian planes at Cam Ranh Bay, because you thought that those kinds of flights raise tensions in the South China Sea?"

Rathke answered: "The point was not the fact of refueling; we simply expressed our view about activity that could raise tensions."

Tired of flogging a dead horse, Lee asked the spokesman whether he "would disagree with the question I think you are being posed, [which is whether] US or NATO exercises in a NATO member country along the Russian border raises tensions given the current situation with Ukraine…Yes or no?"

"We would disagree with that," Rathke stated.