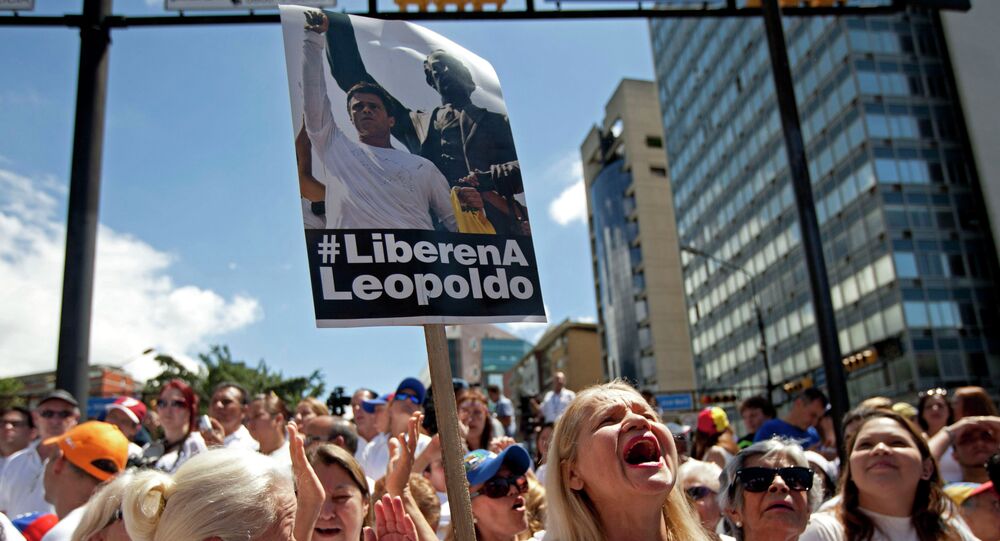 US Using Same Tactics in Venezuela as in Ukraine - Russian Diplomat

The United States attempts to put pressure on Latin American countries over their increased cooperation with Russia and uses the same tactics to destabilize regimes as year ago in Ukraine, a Russian diplomat said.

MOSCOW (Sputnik) — The United States is using the same political technologies in Venezuela as it used one year ago in Ukraine, the director of the Russian Foreign Ministry’s Latin American department told RIA Novosti Wednesday.

© AP Photo / Ariana Cubillos
Maduro Gets Special Powers Amid US Sanctions Against Venezuela
“The conservative flow in Washington has taken the course of forcefully changing the country’s structure by encouraging the irreconcilable domestic opposition with political technologies and color revolutions, which we have seen around us,” Alexander Schetinin said.

The United States attempts to put pressure on Latin American countries over their increased cooperation with Russia, the director of the Russian Foreign Ministry’s Latin American department said.

“We are aware of the fact that there is pressure against Latin Americans. We fully understand that Latin American countries have historical ties with both Europe and the United States,” he said.

Moscow “very much appreciates” that Latin American countries have refused to bow down to foreign pressure and support anti-Russia sanctions, Schetinin added.

© Fotolia / Aleksandar Mijatovic
Greek Farmers Lost Over $46 Mln in Russia's Food Ban: Report
Russia is not driven by a will to spite anyone with its increased presence in the Latin American region, and seeks mutually beneficial cooperation, the official noted.

Commenting on Russia’s ban on certain food imports from the countries that had introduced sanctions against Moscow over the crisis in Ukraine, Schetinin said that Moscow had offered Latin American countries to take advantage of the existing niche.

“Of course, all these countries are interested in expanding their supply of traditional goods to the Russian market. They are ready to work in this direction,” he said.

A number of countries, including in Latin America, boosted their exports of food products to Russia after Moscow banned the import of a long list of food products from the European Union, the United States, Canada, Australia and Norway in August 2014.

“Of course, we cooperate with the Nicaraguan army, contacts are maintained. They are assisted by us, and not only us. An additional significant expansion [of the cooperation] is hardly necessary,” he said.

The diplomat explained that Central America, including Nicaragua, remained in a "fragile balance of power" and it would be wrong to violate this delicate equilibrium.

“The agenda is very broad, and covers bilateral relations, as well as regional and international issues. In regard to regional topics [which will be discussed], I would single out two. The first is the ongoing gradual process of normalization of Cuba-US relations,” Alexander Schetinin said in an interview with RIA Novosti.

He added that the normalization of relations between Washington and Havana proves that "the path of sanctions pressure has reached an impasse and it is impossible to break a country."

The minister is also set to visit Nicaragua, Guatemala and Columbia.

Russia Has No Plans to Create Military Bases in Latin America