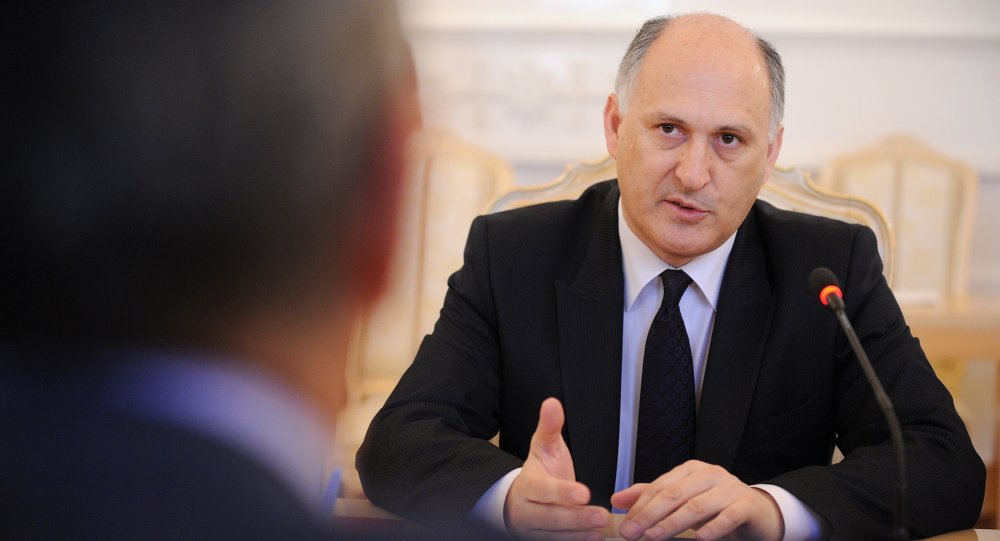 Sputnik recently sat down with Abkhazian Foreign Minister Vyacheslav Chirikba, who shared his thoughts on his country's recognition abroad and his hopes for peace in war-torn Syria.

© Sputnik / Alexander Imedashvili
Georgia Welcomes Russian Offer to Promote Dialogue With Abkhazia, S Ossetia
In an interview with Sputnik on Thursday, Abkhazian Foreign Minister Vyacheslav Chirikba noted that as a country in the south Caucasus located close to the conflict zone in Syria and Iraq, Abkhazia looks forward to a speedy resolution to the series of political and military crises plaguing the Middle East.

"We look on with worry over what is happening in the Arab world, about what has happened to Libya, with the country splitting, and what is happening in Syria, especially taking into consideration that there is a substantial Abkhaz and Circassian diaspora in the latter. We worry about this matter, [it's] very close to our own heart," Chirikba noted.

The Minister added that as a result of the conflict in Syria, over 500 Syrian Abkhazians have moved to Abkhazia. "We hope that Syrian authorities will be able to stabilize the situation and that the radical elements will be defeated. It is vital to restore peace to this beautiful and ancient country," he noted.

Citing his country's close proximity to the conflict zone, Chirikba noted that he worries about the potential for violence and instability in the region to negatively affect Abkhazia, both politically and economically. "All of this [is occurring] not so far from us, from Abkhazia and the Caucasus, and therefore it affects us directly; these territories are politically close to us." The Minister noted that he sincerely hopes that "moderate forces will come to power in all of these countries, which will take account of the interests of the majority and of minorities. I hope that those countries like Libya and Syria, which were stable and thriving in the past, will restore their stability on the basis of consensus between various groups; it is our aspiration to see peace in the Middle East as soon as possible."

Chirikba added that the Syrian Civil War has already negatively affected his country's aspirations to enhance its international recognition. He noted that President Bashar Al-Assad had stepped out in support of Russia's recognition of Abkhazia and South Ossetia in 2008, stating that the Syrian civil war has stalled plans for negotiations on Syria doing the same.

© Sputnik . Irina Ilyicheva
Massive Rocket Artillery Drills Begin in Crimea, Abkhazia, South Ossetia
The Foreign Minister noted that while discussions on international recognition for Abkhazia have been slow in advancing, political and commercial contacts with countries in Africa, Asia, Latin America and the Middle East have been ongoing, and have met with some success, in part due to the assistance of the Russian Foreign Ministry, which has furnished Abkhazia with capacity and contacts abroad. Chirikba noted that contacts with Egypt, Jordan, Syria, Tunisia and Turkey have been numerous and substantive, stating that the "process of the establishment of ties is inevitable and necessary," and adding that his Ministry's main initiatives have thus far have been to "provide information about Abkhazia, her aspirations and political positions."

Chirikba noted that contacts with China have been particularly fruitful, with China unafraid to maintain contacts with the Caucasian republics, so long as they remain unpoliticized. "China's perception of Abkhazia is quite pragmatic. China does not mind contacts with Abkhazia, its businessmen and scientists," Chirikba said. The top diplomat added that Chinese business considers the Black Sea republic to be a major potential transit corridor for Chinese exports to Russia, as well as Russian trade flows to China, due to Abkhazia's developed port infrastructure and its rail links to Russia and beyond.

© REUTERS / Ukrainian Presidential Press Service/Handout via Reuters
Saakashvili’s Science: Ex-President Sheds New Light on Evolutionary Theory
Commenting on US and EU travel rules which prevent Abkhaz nationals from traveling abroad using their Abkhazian passports, Chirikba said that he considers the rules a violation of basic human rights: "The majority of our population cannot go abroad to study, trade or travel. I believe it is a blatant violation of the human rights of Abkhazian citizens, especially on the part of the countries that have billed human rights as the basis for their foreign policy, namely the United States and the European Union [members]." Noting that Washington has recently allowed Abkhazians with Russian passports entry into the US, he added that Brussels continues to punish citizens of the Caucasian republics which were formerly part of Georgia for their declarations of independence; Georgia launched a war against the republics during the Olympic Games in 2008.
...
Reddit
Google+
Blogger
Pinterest
StumbleUpon
Telegram
WhatsApp
64

DPR Counting on Recognition From Abkhazia