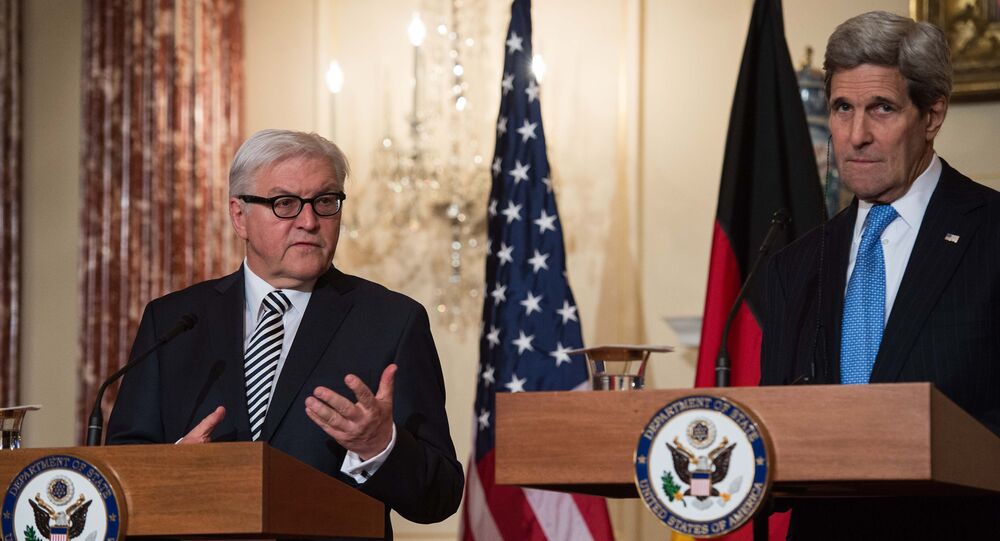 US Department of State said that US Secretary of State John Kerry and his German counterpart Frank-Walter Steinmeier are discussing possibilities of providing Ukrainian army with additional aid.

WASHINGTON (Sputnik) — US Secretary of State John Kerry and his German counterpart Frank-Walter Steinmeier are discussing possibilities of providing Ukrainian army with additional aid, US Department of State said.

"One of the things we'll discuss tonight is what further assistance might or might not be necessary going forward," Kerry said opening his meeting with Steinmeier, as quoted at the US Department of State official website. US Secretary of State mentioned that the United States already decided to allocate $75 million on non-lethal equipment to Ukraine,

On Wednesday, US President Barack Obama approved allocating $75 million in Department of Defense European Reassurance Initiative funds to provide additional non-lethal equipment to Ukraine. The equipment to be sent to Kiev includes drones, night vision devices, medical supplies, military ambulances as well as 30 armoured and up to 200 unarmoured Humvees.

"We all insist that the withdrawal of heavy weapons needs to take place on both parts, and we all insist that it is critical that Russia cease its support for violations of the integrity of Ukraine and its sovereignty," Kerry said.

Steinmeir stated that the United States and Germany need to "keep up the pressure on the conflict parties." He also mentioned a phone conversation he had with Russian Foreign Minister Sergei Lavrov, in which the two top diplomats agreed that both sides to Ukrainian conflict "have to try to make sure that the daily violations of the ceasefire" in order to proceed the next stage in the process of implementing the Minsk agreements.

The conflict in eastern Ukraine started in April, 2014 when Kiev launched a military operation against independence supporters of Donbas. According to UN estimates, more than 6,000 people have died as a result of the hostilities.

Kiev authorities repeatedly ask Western states to provide it with lethal assistance. A number of European nations, including Germany and France, said they would not arm the Ukrainian troops. Washington is still considering the move.