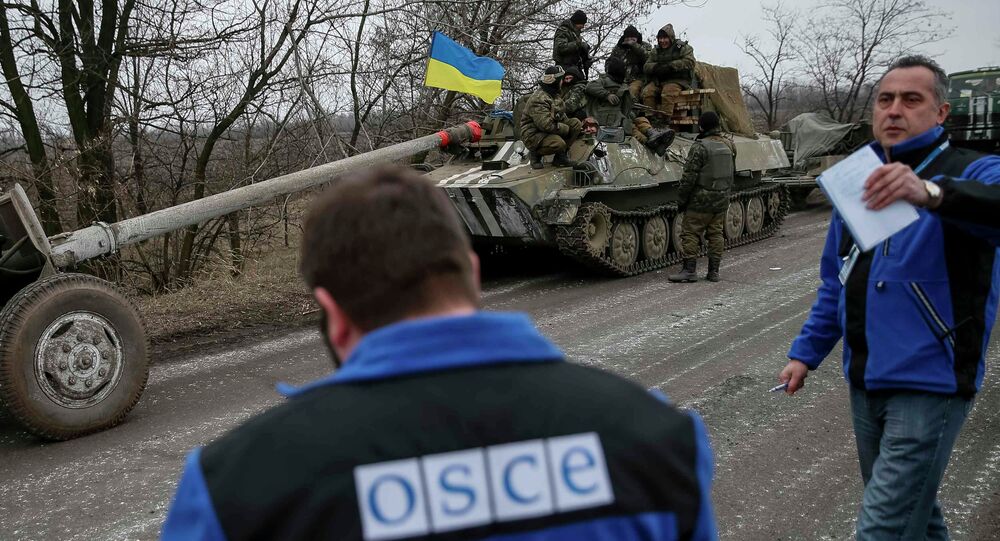 OSCE does not provide enough information on Kiev's activities related to the implementation of Minsk agreements, a Russian diplomat said.

© AFP 2021 / ANATOLII STEPANOV
Kiev Refuses to Fully Pull Back Weapons Until Militias Withdrawal Confirmed
MOSCOW (Sputnik) — Monitors for the Organization for Security and Co-operation in Europe (OSCE) in Ukraine do not provide information on the implementation of Minsk agreements by Kiev, the head of European cooperation department of Russian Foreign Ministry told RIA Novosti.

A ceasefire agreement between the warring sides stipulated a pullout of artillery from the line of contact within 15 days beginning February 15. Donetsk and Luhansk forces said they had completed the withdrawal March 1, thus meeting the deadline, but accused the OSCE of refusing to immediately confirm the information.

© AP Photo / Evgeniy Maloletka
Shelling of Pervomaisk Mine Proves Kiev Did Not Withdraw Mortars - Luhansk
"The [OSCE monitoring] mission could react in a much quicker way to the facts of militias completing their heavy weapon withdrawal. There are ceaseless references to things that are hard to check, and there is no mention of Kiev implementing the agreements, or rather, delaying their implementation," Ivan Soltanovsky said.

The diplomat also expressed hope that OSCE mission's reports would be more balanced, but stressed that Moscow was in general satisfied with the organization's work.

The OSCE deployed a Special Monitoring Mission to Ukraine last year, when the conflict between government forces and independence supporters of the country's Southeast escalated. OSCE experts currently monitor the ceasefire.