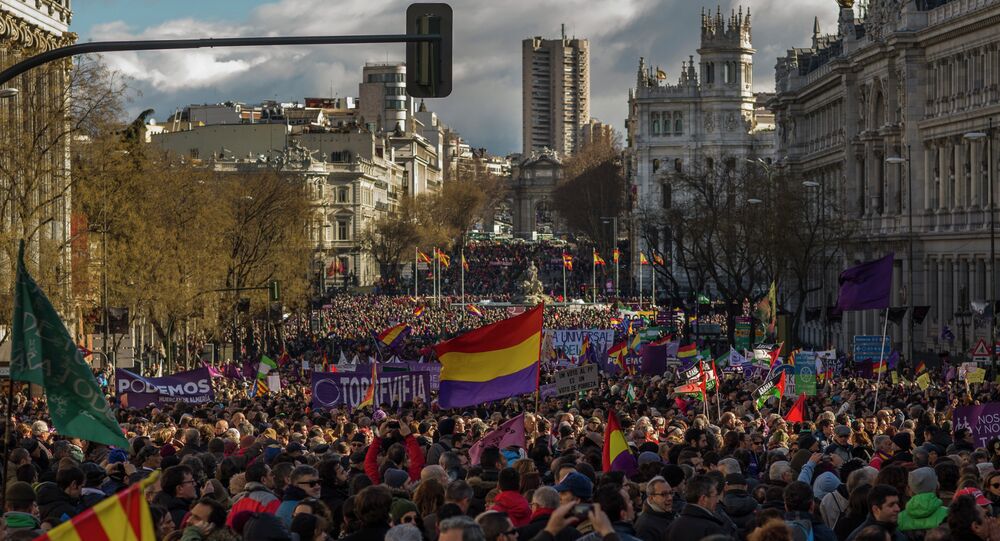 The poll conducted for El Pais newspaper by Metroscopia suggests that four political parties - Podemos (We Can), PP (The People’s Party), PSOE (The Spanish Socialist Worker’s Party) and Ciudadanos (The Citizens) – would have gained a total of 80 percent of popular vote if the elections were held today.

MADRID (Sputnik) — Four Spanish political parties, including the anti-austerity left-wing Podemos (We Can) created only a year ago, have almost similar chances of winning the December parliamentary election, according to a poll published by El Pais on Sunday.

© Flickr / Vicente José Nadal Asensio
Spanish PM Is 'Useless' Say Anti-Austerity Podemos
Podemos, a leftist party that was established in January, 2014, came first with 22.5 percent of those questioned voting in its support. However, in comparison with last month’s results, Podemos lost 5.2 percent of votes.

PSOE, the main opposition party, was close second with 20.2 percent of votes.

The ruling conservative PP led by Prime Minister Mariano Rajoy came third with 18.6 percent of the votes followed closely by the center-left Ciudadanos with 18.4 percent. The Cuidadanos gained more than six percent since February poll and more than 10 percent since January.

The poll reveals Spaniards remain highly interested in parliamentary election with some 74.6 of those questioned planning to vote.