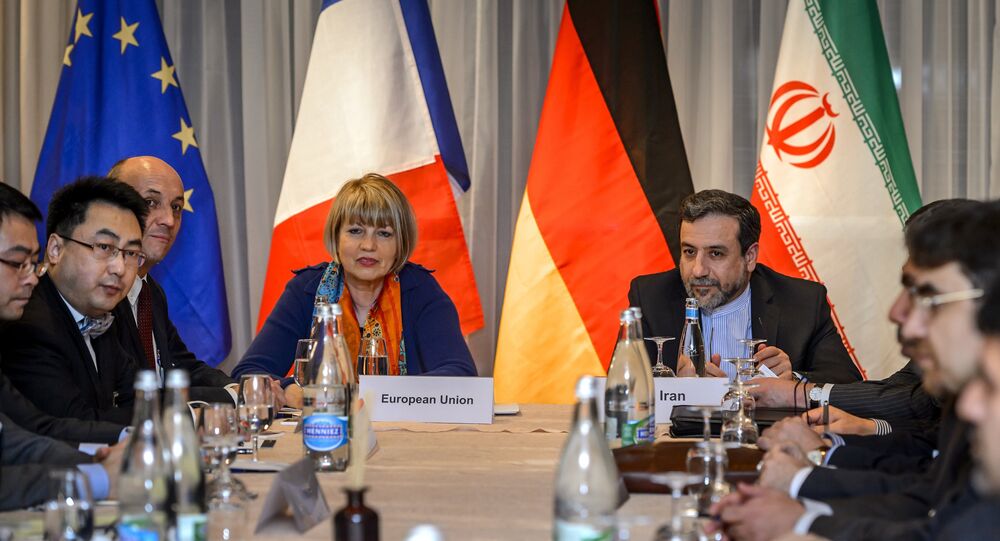 The EU External Action Service has announced that the talks between the P5+1 group of international mediators and Iran on the latter's disputed nuclear program held in the Swiss resort of Montreux have led to certain progress and more understanding.

BRUSSELS (Sputnik) – The talks between the P5+1 group of international mediators and Iran on the latter's disputed nuclear program held in the Swiss resort of Montreux have led to certain progress and more understanding, the EU External Action Service has announced in a statement.

"The meetings were constructive and useful. Some progress was made and a better understanding on some of the issues emerged," the statement, released on Thursday said, referring both to the one-day talks in Montreux and the preceding bilateral meetings held on March 2-4.

According to the statement, the P5+1 and Iran will "continue to work on the remaining gaps" and plan to meet again "very soon".

© AFP 2020 / ATTA KENARE
Iran, P5+1 Agree on Some Aspects of Future Deal at Montreux – Negotiator
A source in the Iranian delegation told RIA Novosti on Wednesday that the next round of P5+1 talks on the Iranian nuclear program will be held on March 15-20.

The West has been suspecting Iran of developing nuclear weapons under the guise of a civilian program, claims that Tehran has repeatedly denied.

The UN Security Council, the United States, the European Union and a number of other counties have imposed sanctions on Iran over its nuclear development, which Tehran insists is exclusively for peaceful purposes.

The P5+1 has been negotiating a long-term nuclear deal with Iran since November, 2013. The agreement is expected to ensure the peaceful nature of Iran's nuclear activities in exchange for the lifting of sanctions.

In November 2013, Iran and the P5+1 group only managed to reach an interim agreement.

At November 2014 talks in Vienna, the negotiating parties again failed to work out a comprehensive deal, agreeing instead to extend the deadline for reaching a final agreement to July 2015.