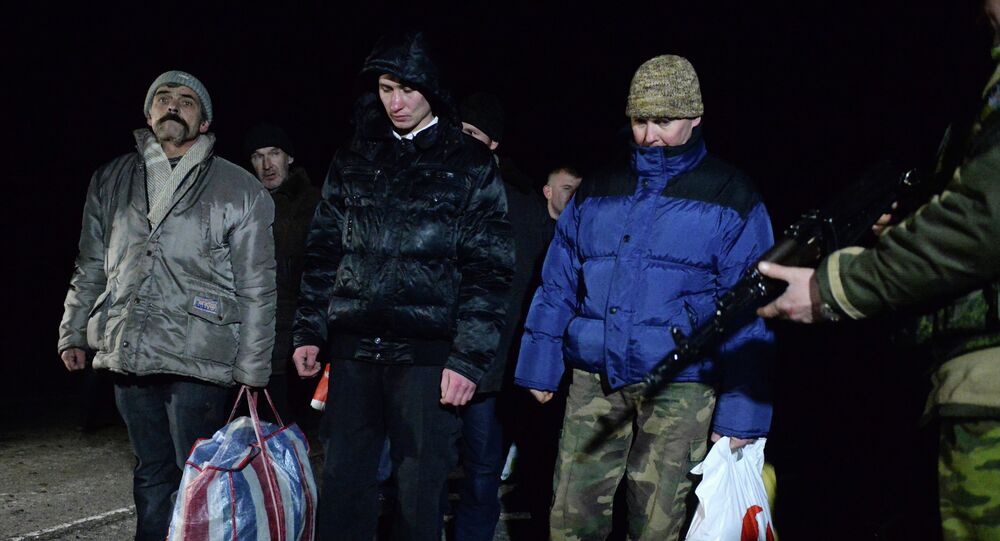 © REUTERS / Gleb Garanich
Heavy Weaponry Withdrawal to Start in Donbas on Sunday - Reports
KIEV (Sputnik) – The prisoner swaps between Ukrainian forces and the militia of the self-proclaimed people's republics of Donetsk and Luhansk (DPR and LPR) should end on March 4-5, Yuriy Tandit, the head of the Ukrainian Defense Ministry's center in charge of prisoner exchanges, has announced.

"In accordance with the latest agreements that were signed in Minsk, we have to take the prisoners before March 4-5. We will adhere to this principle," Tandit told "24 TV", a Ukrainian television channel.

On Saturday, DPR and LPR returned 140 Ukrainian soldiers to the Kiev side, while the latter transferred 36 DPR and 16 LPR prisoners to the self-proclaimed republics, according to DPR ombudsman Daria Morozova.

DPR had invited monitors from the Organization for Security and Co-operation in Europe (OSCE) to oversee the prisoner swap with Kiev.

An all-for-all prisoner exchange is among the steps aimed at putting an end to the conflict in southeastern Ukraine that were agreed upon by the leaders of Russia, Ukraine, Germany and France on February 12, following talks in the Belarusian capital, Minsk.

What do you think is the most important event of the week?
Voted: 1
All polls
A September Contact Group agreement reached by representatives from Kiev, DPR, LPR, Russia and the OSCE also stipulated an all-for-all prisoner exchange between Ukraine's conflicting sides.

The latest prisoner exchange under the September agreement took place in late December, 2014. Then, DPR handed over 145 prisoners to Kiev and received back 222 of its fighters.

The conflict in Ukraine started last spring, when Kiev launched a military operation in the country's southeast, where independence supporters refused to recognize the new coup-installed government.

Apart from the prisoner exchange, the latest 13-point Minsk peace deal stipulates that the two sides cease fire in southeastern Ukraine starting from February 15 and create a security zone on the line of contact through the withdrawal of heavy weaponry from the region.

The OSCE has said that the ceasefire is generally holding in Ukraine, but has not yet confirmed any information on the withdrawal of heavy weaponry by the two sides.

Donbas Republics Hand Over 140 Soldiers to Kiev in Prisoner Swaps