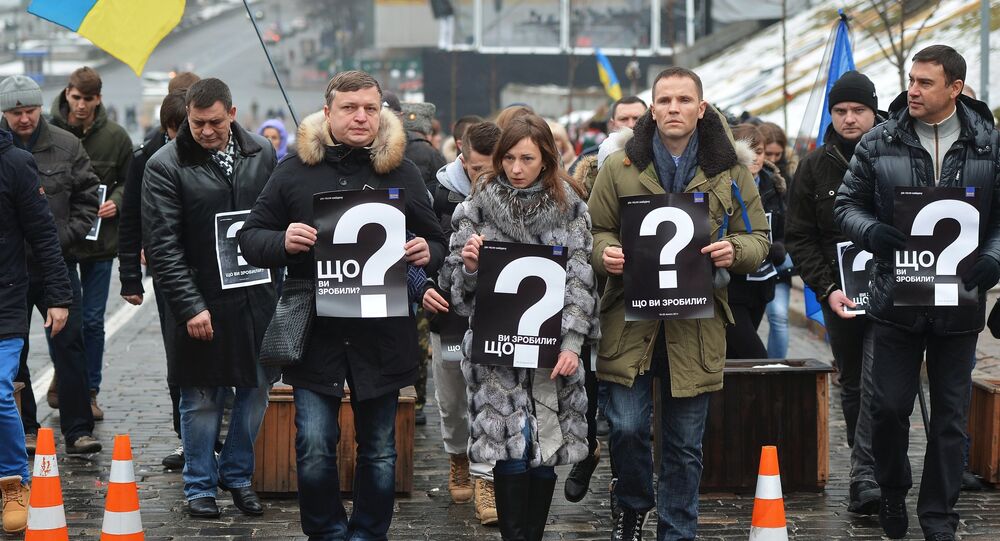 Ukraine's economy is balancing on the brink of default, its gold stocks are vanishing and land-grabbing is taking place. So far, the question remains if the Ukrainian nation still believes in the success of the Euromaidan revolution.

Ekaterina Blinova — In a year beginning with the notorious February military coup in Ukraine, also known as the Euromaidan revolution, the Ukrainian economy has come to the brink of default.

Ukrainian authorities are celebrating the anniversary of Euromaidan revolution in Kiev this week, turning a blind eye to their own failure to bring the country's economy out of crisis, and pushing it toward "irreversible" collapse, experts note.

© Sputnik / Evgeny Kotenko
Bonfire of Illusions: Rally in Kiev on Maidan Anniversary
8
It has turned out that a $27 billion bailout, offered by the International Monetary Fund (IMF) and multinational creditors to Kiev, will not be enough to bolster the anemic Ukrainian economy as well. However, new loans, requested by Kiev to keep its economy afloat will only exacerbate the situation, experts say, pointing to the fact that Ukraine, saddled with heavy debts, will not be able to pay them off in the forthcoming decades.

According to IMF chief Christine Lagarde, an expanded emergency package will amount to $40 billion over the four year period and will come via international creditors, including major Western powers, for instance Switzerland and the United States, the World Bank, the European Bank of Reconstruction and Development (EBRD).

The chief of the IMF clarified that the decision was made due to the fact that the Ukrainian regime has already carried out a string of tough economic reforms, particularly increasing gas tariffs for the country's households to 56 percent, adopting a flexible exchange rate regime, freezing numerous social programs and conducting "governance reforms" of state-owned enterprises.

© Sputnik / Sergei Kirkach
Ukrainian Currency in Free Fall Following Central Bank's Decision to Stop Interventions
The Ukrainian government is irresponsibly driving the nation deeper and deeper into a debt trap, analysts say, while the country's financial and industry sectors are facing tremendous losses unable to facilitate the growth of the state's economy. More than 50 percent of Ukrainian enterprises are unprofitable: over the last nine months the financial losses of large and medium-sized companies in the country mounted over $14 billion. Ukrainian GDP dropped by 7.5 percent. According to some estimates, Ukraine's external debt (including the debts of the country's enterprises) could reach $135.85 billion, with a debt repayment of $58.55 billion in 2015 alone. On the other hand, the internal war, launched by Kiev against the Ukrainian eastern region in 2014 has severely weakened the country's economy.

Making matters worse, the National Bank of Ukraine (NBU) reported in November 2014 that the country's gold bullion reserves had diminished tremendously. Surprisingly, the NBU head provided no explanation where the country's gold has gone. Valeria Hontareva, the Governor of the Bank, admitted that there was almost no physical gold left in the vaults, adding that the amount of solid gold ingots barely covered one percent of the Ukrainian national reserves. The statement immediately sparked controversy among experts, since in February 2014 Ukrainian official gold holdings amounted to 42.3 tons, or 8 percent of the state's reserves. So far, over the year Ukraine's overall gold and foreign currency reserves reduced from around $17 billion to $6.42 billion, analysts point out.

© Sputnik / Sergey Pivovarov
German Lawmakers Claim Ukraine Conflict Covers Up Massive Cropland Seizures
Meanwhile, a sinister atmosphere surrounds the seizure of the country's high-quality arable lands by Ukrainian moguls and foreign firms, funded by the World Bank and EBRD. According to German lawmakers, some prominent Western corporations including Monsanto and DuPont have been involved into land-grabbing in Ukraine, using the ongoing military conflict as a cover. The state's arable territory comprises of 32 million hectares, however, about 17 million hectares have already come under control of transnational holdings.

As Kiev's prolonged the moratorium on land sales lasts until 2016, investors took out a 50-year lease on Ukraine's agricultural territories, planning to buy the lands, once the state ban is lifted. The Ukraine-EU association agreements open the doors to the liberalization of the state's economy and relaxation of its agricultural laws. While the West is obviously benefitting from the reforms, Ukraine's small and middle-sized farms have been put under threat.

One year after Euromaidan. What do you think about last year’s revolutionary events in Ukraine?
Voted: 1
All polls
Ukrainian experts and political activists point out that the corrupt regime of Viktor Yanukovych was replaced by another venal group. According to Tatyana Montyan, a Kiev-based lawyer and politician, the West is not interested in Ukraine's development: the 45-million nation could become the EU's economic rival. Using the longstanding turmoil in eastern Ukraine as a smokescreen, the Ukrainian moguls are exporting capital abroad instead of reinvesting money into the state's economy. So far, the country has no chance to recover, burdened with huge debts. Analysts underscore that the IMF has long been using its "debt trap" strategy, referring to the example of Greece and other European debt-laden countries.

The question remains, if the Ukrainian nation still believes in the success of Euromaidan revolution of February 2014…