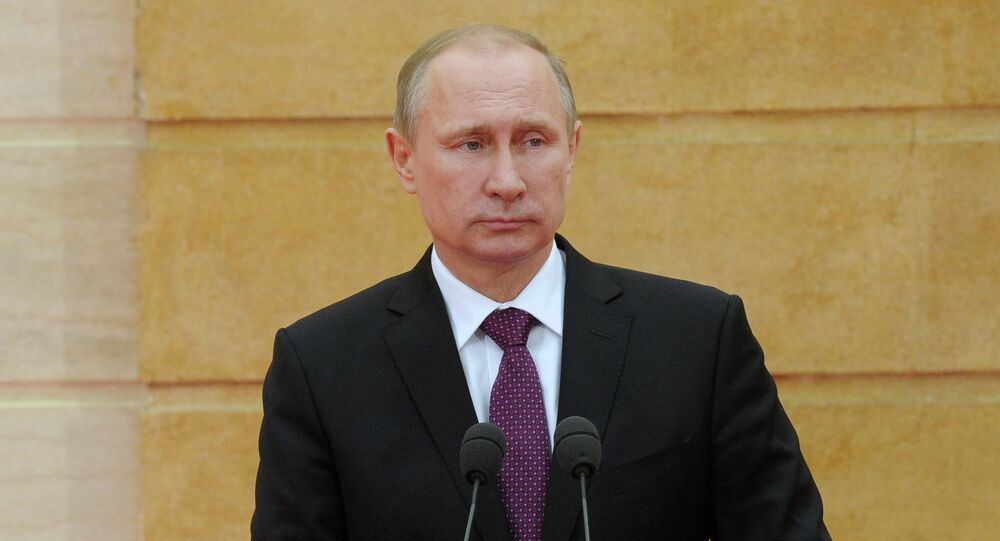 "This was not the best night of my life. But the morning was good regardless of all the difficulties during the negotiations and we were able to agree on the important thing. The first thing we agreed on is the ceasefire starting from 12 a.m. [local time] on February 15. The second point, which I consider extremely important — is the withdrawal of heavy artillery from the today’s contact line for Ukrainian army, and from the line marked on September 19 last year in the Minsk agreements for Donbas,," Putin told journalists in the Belarusian capital of Minsk following the peace talks on Ukraine.

Vladimir Putin also made a statement for the press after Normandy format talks http://t.co/pj3C2UuT0V #Ukraine pic.twitter.com/AymVAQ8PbP

Kiev refuses to negotiate with the self-proclaimed republics of Donetsk and Luhansk, Russian President Vladimir Putin said adding that the parties have not agreed on the document on the Ukraine reconciliation yet.

"Why did the talks last so long? I think this, unfortunately, is because the Kiev authorities rejected direct contacts with the representatives from the Donetsk and Luhansk People’s republics," Putin said.

"One document was signed just now. The document was signed by the Contact Group, it is called ‘The package of measures aimed at implementing the Minsk agreements'… The second document is not for signatures — this is a statement of French, Ukrainian presidents, your faithful servant, and German Chancellor saying that we support this process," Putin said.

"There are several conditions and positions in the political settlement. The first is a constitutional reform that takes into considerations the legal rights of people living in Donbas," Putin said after the Minsk talks on Ukrainian reconciliation.

© REUTERS / Vasily Fedosenko
'No Good News' in Regard to Minsk Meeting, But Hope Remains - Poroshenko
Earlier today Ukrainian President Petro Poroshenko said that so far there is “no good news” coming from the reconciliation talks on the Ukrainian crisis in Minsk, but there is some hope, Agence France-Presse reported Thursday.

“Unfortunately there isn’t any good news. So far no news, but there is hope,” Poroshenko said, citing several “unacceptable conditions” set forth from the Russian side.

Participants of the Normandy format meeting — Russian President Vladimir Putin, Ukrainian President Petro Poroshenko, French President Francois Hollande and German Chancellor Angela Merkel – have been in talks for more than 13 hours in the Belarusian capital Minsk to hammer out a deal on the Ukrainian crisis.

Members of the Contact Group, comprising envoys from Kiev, Moscow, the Luhansk and Donetsk people’s republics, as well as the Organization for Security and Co-operation in Europe (OSCE) have also been holding talks in Minsk since Tuesday.