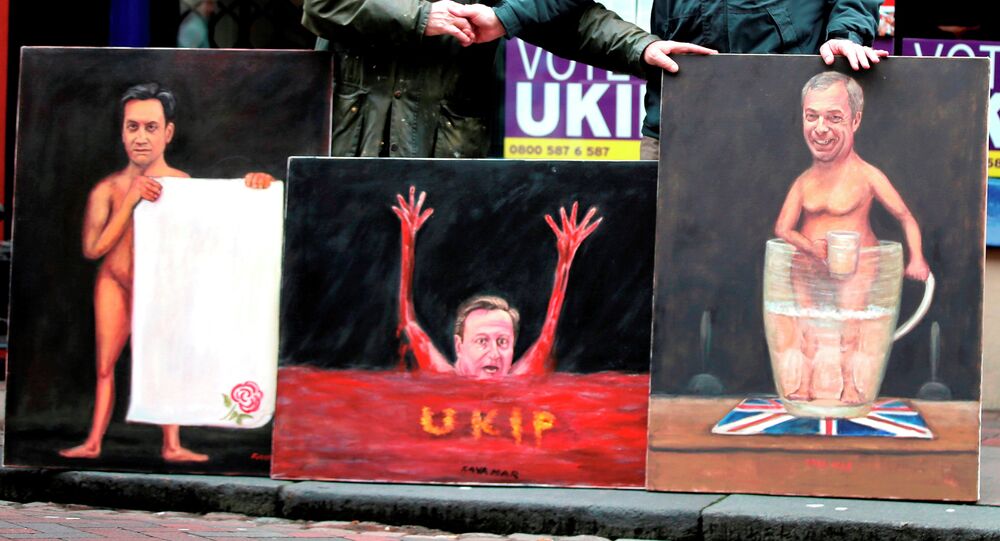 With political competition heating up ahead of May’s general election in the UK, the media, Internet and public places are being flooded with PR stunts, memes and messages from slick-talking politicians trying to put their best foot forward to win some votes.

However a new website has been set up to try and get Brits to focus more on the policies of the major parties, rather than the personalities.

The site voteforpolicies.org.uk has compiled the policies of the UK’s major parties – Conservatives, Labour, Liberal-Democrats and UKIP – along with The Greens and British National Party (BNP) in an attempt to get more people interested in politics, with a focus on the meat and bones of policy, rather than the personality and public relations spin of the group’s respective leaders.

Wow, we've hit half a million! Thank you all, great to see such interest ahead of the election. New site next month! pic.twitter.com/VA0xKsTggY

A key feature of the site is a blind survey that people can take, where the key policies of the unnamed parties are put up against each other, with the voter choosing which policy they would vote for in an election.

The survey features a round-up of the various parties’ policies across a wide range of issues such as immigration, the economy and the environment.

Once completed, the results are then collated, with people then able to see what party’s beliefs they support, which the website says, “helps [people] make an informed, unbiased decision about who to vote for.”

The site, which claims that it is non-profit and not aligned to any political movement, aims to cut out mainstream media rhetoric, and debunk what it perceives to be some myths associated with certain parties.

“Policies are what actually change our lives — and what the politicians are promising to do. By focusing on policies we can ignore the media hype, negative spin and personality battles that distract our politics from what really matters — improving how we live,” a statement on the group’s website reads.

Perception vs Reality: A Public Discrepancy?

So far, more than 500,000 people have been surveyed on the site, with the results seemingly tipping the current state of British politics on its head.

The figures on the site show that the policies of the Green Party are the most popular, with almost 28 percent of those taking part favouring their approach compared to the other parties.

Labour follows them with 20 percent support, the Lib-Dems on 17 percent, David Cameron’s Conservatives with only 14 percent approval, ahead of UKIP (12 percent) and the BNP (10 percent).

Compare this with last week’s Opinium poll, published in The Observer, which showed that Labour was the most popular party with 34 percent of the vote, the Conservatives second with 32 percent, UKIP 15 percent, The Greens 8 percent and the Lib-Dems 7 percent behind.

According to the site, The Greens policies on education, health and the NHS, the economy and environment are, at present, overwhelmingly more popular than the other parties, while the Lib-Dems approach to Europe – believing the UK should remain within the EU and work with the bloc to create more jobs and fight crime – was the most popular among respondents.

These findings seemingly contradict some widely-held preconceptions and media reports, which suggest that an increasing number of Britons would like to leave the EU, and that traditionally the Conservatives are considered the best at managing the economy.

Despite showcasing a sample of the general public’s opinions towards major policy, it’s not known how accurate a reflection these figures are of the overall population, particularly considering some significant regional parties from Scotland (SNP), Wales (Plaid Cymru) and Northern Ireland aren’t included.

The Power of Public Image

However, the statistics do open the question of how public perception of a party and their leaders may influence the group’s popularity, and how politicians use to the media as a PR tool.

Labour leader Ed Miliband has been on the receiving end of jokes and attacks about his physical appearance, with incidents such as him struggling to eat a bacon sandwich going viral, potentially denting his credibility.

Miliband himself tried to counter this backlash by saying that he wouldn’t be a “photo-op Prime Minister,” but would instead run on “the issues, the substance and how to change Britain,” after being referred to as having similarities to famous British comedy character Mr. Bean.

Meanwhile much of UKIP’s apparent increase in popularity has been put down to the ‘people’s man’ public persona of party leader Nigel Farage, who is often snapped by the media with a pint of ale in his hand talking to locals at a bar about their concerns.

No idea when Farage`s blokey, "man of the people" quaffing a pint in a pub persona became tiresome, but it now hurts. pic.twitter.com/GfVuz47S0c

The ‘vote for policies’ website has certainly raised some questions about whether Brits are actively taking into account the policy of the country’s parties ahead of this year’s election, and has also triggered debate about the role of the media in reporting on the hype rather than the facts.

However, whether this approach of looking at the policies rather than the personalities will have a significant impact come May is still yet to be seen.