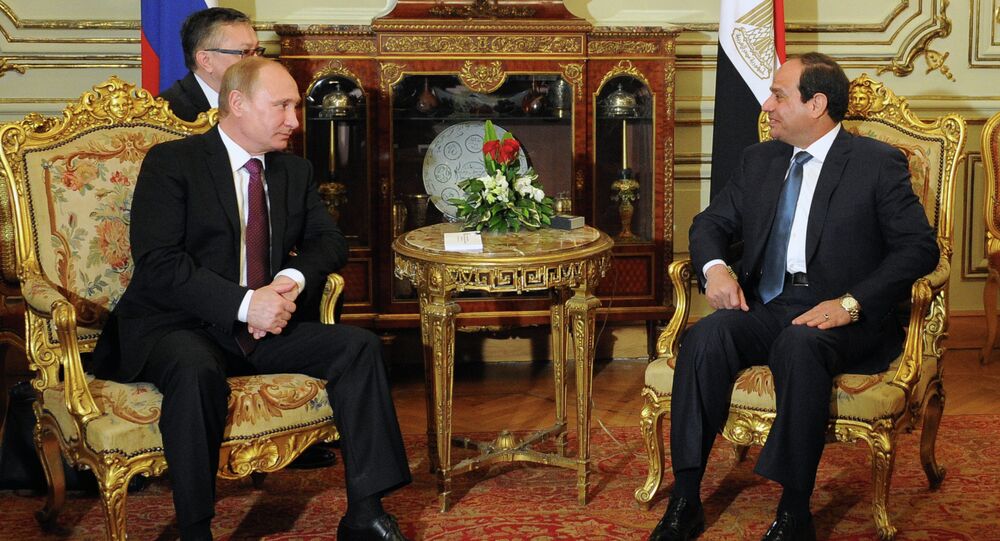 There was more than $4.5 billion of trade between Russia and Egypt in 2014, a more than 80 percent increase on the year before, said President Putin. Free trade agreement means that the markets of Russia, Belarus, Kazakhstan, and Armenia will be more easily accessible for Egyptian products and vice versa.

The EEU was established on May 29, 2014 by a treaty signed by Russia, Belarus and Kazakhstan. Armenia joined the organization in October, and Kyrgyzstan signed its accession treaty in December. The union’s ultimate objective is to establish a single economic market stretching from the European Union to China, serving over 170 million people.

© Sputnik / Michael Klimentyev
Russia Plans to Build Four 1,200-MW Capacity NPP Units in Egypt - Rosatom
In a historic move, President Putin offered Egypt Russia's full-scale assistance in building the country’s first nuclear energy facility. “If the final agreements are reached, we will not only help building a nuclear power plant but will be able to assist [Egypt] in creating an entire nuclear power industry…including through training of personnel and help with scientific research," Putin said.

Egypt intends to build the Dabaa Nuclear Power Plant in the country’s north. The power plant is expected to have a capacity between 1,000 and 1,200 megawatts.

Also, the two countries' leaders discussed a broad range of international issues, including the Middle East peace process. "We have agreed on the need to maximize efforts to restore the negotiation process between Israelis and Palestinians on a two-state basis, with East Jerusalem as the capital of the State of Palestine," Sisi said.

According to the Egyptian president, the sides have also expressed the need to preserve the territorial integrity of Libya and Iraq, as well as the urgency for various political forces to reach a consensus.

On Monday, Russian President Vladimir Putin began his state visit to Egypt to boost bilateral ties with the Arab republic. Earlier in the day, the Russian leader said that the two countries were increasingly cooperating in such spheres as trade, nuclear energy, space, tourism and agriculture.