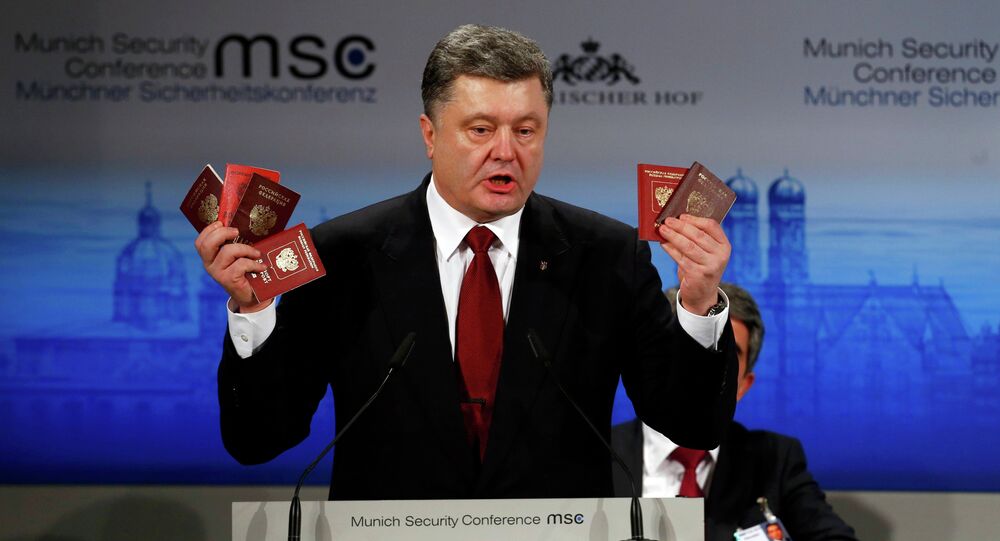 Social media users from Russia and elsewhere were quick to question and disparage Ukrainian President Petro Poroshenko's showing off of Russian passports, which he says are "the best evidence" of a Russian military presence in Ukraine.

Speaking at the Munich Security Conference on Saturday, the Ukrainian President held up several passports which he said belonged to Russian military personnel serving in Ukraine. "I [have taken] with me the passports and military ID of Russian soldiers and officers," Poroshenko told conference attendees. "This is the best evidence for the aggression and for the presence of Russian troops."

Those are passports and military IDs of Russian soldiers who 'lost their way' into Ukraine. pic.twitter.com/iAr2gQwE9O

But Twitter users weren't so quick to accept Poroshenko's evidence:

Poroshenko wants us to believe, that Russian special-ops carry passports with them while on covert mission... okay.

.@27khv: "Russian soldiers cannot use their passports while on active service – they must hand them in." http://t.co/l5UM6ZyRBc

Others questioned the condition of the documents themselves.

The documents held up by the president featured three 'internal' passports (an internal travel document used in Russia, similar to a national ID card); a 'military ticket' of the kind given out to all Russian men, whether or not they have served in the military; as well as two passports for international travel, which Russians did not even need to enter Ukraine until recently.

Serious questions aside, the creative power of the social media soon came to life, with users posting photoshopped images of the Ukrainian president holding various objects ranging from sock puppets and maracas to Pokemon cards and Cheburashka dolls in military fatigues.

"If they don't buy the passports, next time I'll bring balalaykas," thought Poroshenko.

Others posted images of what the inside of one of the passports might look like, with one user posting an image of Jason Bourne's passport in the Bourne Identity:

Here's the data page of one of those Russian passports Willy Wonka/Poroshenko was waving in Munich. pic.twitter.com/AvOoS5hFqV

Another went a step further to really press the point home, featuring the Bourne Identity passport, but with an image of Rocky opponent Ivan Drago with a Russian flag waving behind him.

© Sputnik / Mikhail Palinchak
Kiev Unable to Provide Copies of Alleged Russian Soldiers' Passports
The Russian Foreign Ministry has since asked the Ukrainian government to provide it with copies of the documents in order to verify their authenticity, but Kiev has thus far been unwilling or unable to do so.

© REUTERS / Maksim Levin
Secrets and Lies: Ukraine Chief of Staff Admits No Russian Troops in Donetsk
Last week, Ukraine's Chief of Staff Viktor Muzhenko told Ukrainian television that he had found no evidence that the Russian army was engaged in combat operations in Donetsk and Luhansk.

Last month, President Poroshenko had alleged that there were up to 9,000 Russian military personnel fighting on the side of the separatist eastern regions. The US State Department has not been able to provide evidence for the allegations, while OSCE observers based at border crossings noted that "there is absolutely no way you can possibly hide huge military formations on a relatively small territory wide open to reporters and OSCE representatives."

Since the start of Kiev's military assault on eastern Ukraine’s independence supporters in April 2014, Kiev and the West have repeatedly accused Moscow of military intervention in the crisis. The accusers claim that the Russian government has sent troops and weaponry to help local militias, claims which Russian officials have repeatedly denied for lack of evidence.