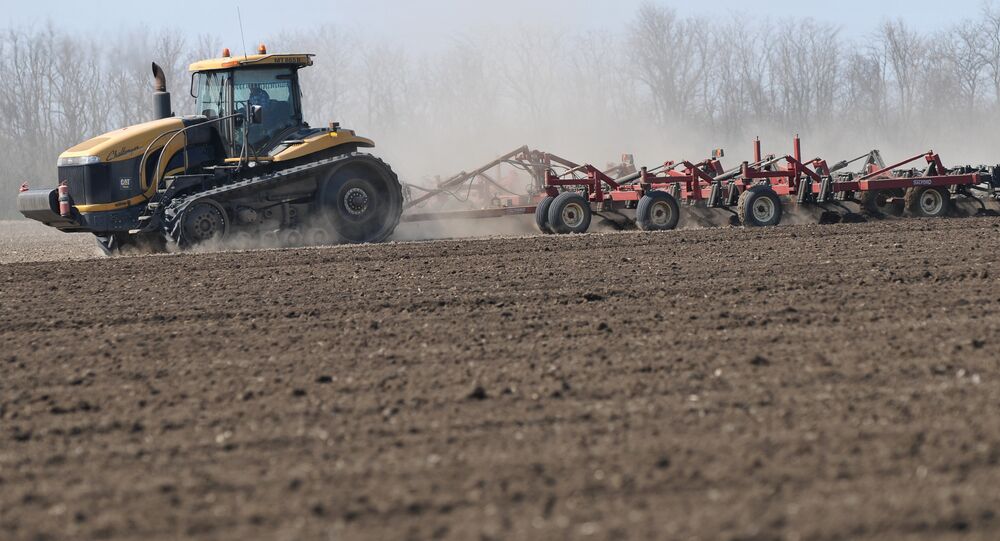 According to the office of a German parliament member, the conflict in Ukraine is used to cover up a sale of farmlands in the interest of major corporations.

© AP Photo / Sergei Chuzavkov
McCain to Sputnik: Ukraine's Use of Cluster Bombs Is US' Fault
MOSCOW (Sputnik) — The armed conflict in Ukraine is a smokescreen for the seizure of high-quality cropland by foreign firms funded by the World Bank and the European Bank for Reconstruction and Development, the office of a German parliament member said on Thursday.

"The conflict in Ukraine is used to cover up a sale of farmlands in the interest of major corporations," Birgit Bock-Luna, who heads the office of Niema Movassat, a deputy for the opposition Left faction in the German parliament, told RIA Novosti.

Bock-Luna told RIA Novosti a group of faction representatives had officially inquired with the German government on the actions of the country's state-run banking group Bankengruppe KfW that they said is behind the seizure of Ukraine's arable lands, some of the best in Europe.

© East News / AP
Germany Says Moscow Talks on Ukraine to Be Based on Minsk Protocol
Ukraine has a temporary ban prohibiting the sale of farmlands to foreign entities until January 2016.

According to data obtained by German lawmakers, Alfred C. Toepfer International was given a $60 million loan to buy an additional 50,000 hectares in Ukraine, alongside 50,000 it already owns.

German lawmakers suggest that large areas of Ukraine's arable lands could be used to grow genetically modified crops, away from the watchful eye of the European Food Safety Authority (EFSA), which is EU's agricultural regulator.

© AP Photo / Cliff Owen
McCain Threatens Obama With Bill Requiring US to Send Arms to Ukraine
Lawmakers say they have reasons to believe that the German government has been involved in funding farmland grabs in Ukraine through its ministries, providing assistance to joint EU and German agricultural projects with Kiev.

The Ukraine Investment Climate Advisory Services Project, Germany's agricultural center Deutsche Agrarzentrum (DAZ), and the German Advisory Group on Economic Reforms in Ukraine are some of the projects that helped to negotiate land grabs with Ukrainian government officials, lawmakers said.

Bock-Luna said the Ukrainian government that came to power in Kiev after last year's coup has been actively giving away farmland in return for loans from international creditors.

"The previous Ukrainian administration was opposed to further relaxation of agricultural laws, but this changed after the coup, with the help of the World Bank and the European Bank for Reconstruction and Development," she added.

Ukraine is a major crop producer in the European market. It commands over 32 million hectares of farmland, equivalent to around one third of the arable land in the entire European Union.

Donetsk to Sell Coal to Ukraine Only Under Sustained Ceasefire