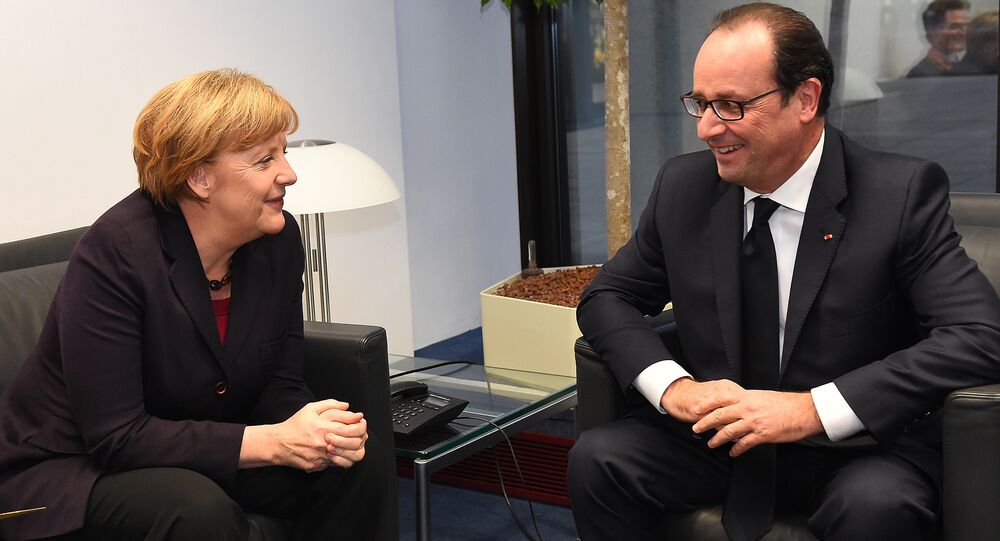 The leaders of France and Germany will visit Kiev on Thursday and Moscow on Friday to hold talks on the crisis situation in Ukraine.

© AP Photo / J. Scott Applewhite
Hollande Aims at De-Escalating Russia-EU Tensions Unlike Merkel: Lawmaker
PARIS (Sputnik) – French President Francois Hollande and German Chancellor Angela Merkel will visit Moscow on Friday to discuss the ongoing crisis in Ukraine. The French and German leaders are set to visit Kiev a day before their visit to Russia as well.

“We decided with [German Chancellor] Angela Merkel to present a new initiative. This afternoon we will depart for Kiev. We will make new suggestions on settling the conflict in Ukraine and they will be based on the territorial integrity of the country,” Hollande said during a press conference in Paris.

During their visits to Moscow and Kiev this week, the leaders of France and Germany plan to prepare a draft reconciliation agreement on Ukraine that would satisfy all sides of the conflict, the French president said Thursday.

“The purpose of our joint initiative with Angela Merkel is not to discuss, but to prepare a document, a text that may satisfy all sides of the conflict,” he told reporters.

US Secretary of State John Kerry is also in Kiev Thursday, he is set to meet with Ukrainian President Petro Poroshenko at 11 a.m. GMT.

We welcome US State Secretary @JohnKerry in Kyiv and wish him a fruitful visit. pic.twitter.com/VhIN60Rqjz

On December 6, the French president had an unplanned visit to Moscow following his trip to Kazakhstan. Hollande held talks with Russian President Putin at the Vnukovo-2 airport.

Russia, Ukraine, Germany and France are the members of the Normandy format talks on the settlement of the Ukrainian crisis. The last Normandy format meeting at the foreign minister level took place in Berlin on January 21, but, like previous meetings, did not lead to a breakthrough in the issue.

Wolfgang Ischinger, the chairman of the Munich Security Conference, to be held from February 6 to 8, told RIA Novosti that a Normandy format meeting on the sidelines of the conference was possible, although not very likely.