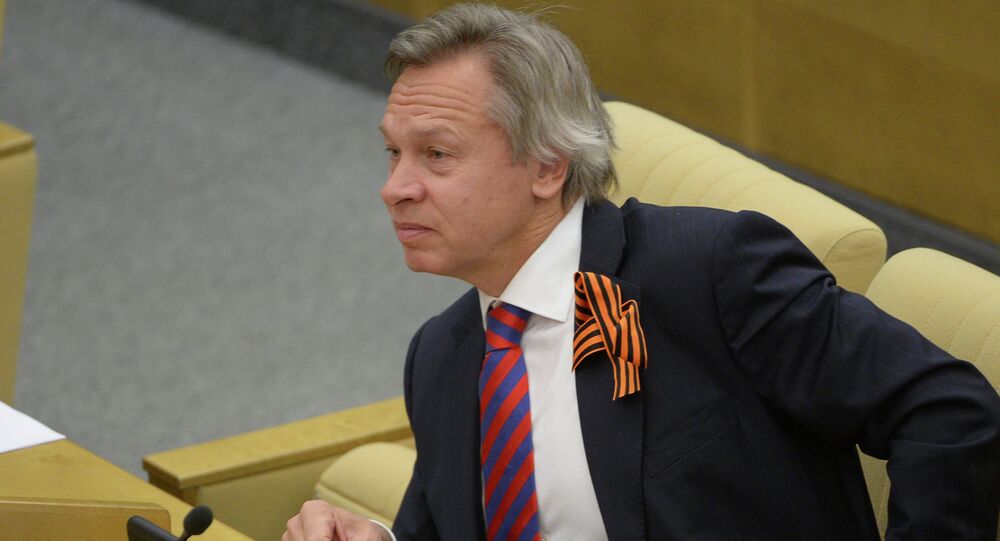 Reports that Saudi Arabia and Russia have been negotiating cutting oil production in exchange for the Kremlin changing its stance on Syria are untrue.

© Flickr / Paul Lowry
Saudis Allegedly Use Oil Prices as Leverage Against Russia in Syria Talks
Earlier, the New York Times said that Saudi Arabia may cut its oil production, which would lead to a growth in global oil prices, if Russia will refuse to further support the Syrian government led by Bashar al-Assad. Higher oil prices, in turn, would help Russia to tackle its economic problems, the New York Times reported.

“There were no negotiations with the Saudis to decrease oil production in exchange for Moscow’s refusal to support Assad. Hoax.” – Pushkov wrote on his Twitter account.

The Saudi monarchy is at odds with al-Assad and is believed to be backing anti-government rebel groups in Syria.

© Flickr / Neal Wellons
Russia May Lose $160Bln Annually on Oil Exports if Prices Drop to $45
Previously, Syrian President Bashar al-Assad said in an interview with Foreign Affairs magazine that Russia and Iran will continue to support Damascus, despite economic difficulties caused by the plunge in oil prices.

Global oil prices started to plunge last summer due to oversupply. Prices dropped further after the Organization of the Petroleum Exporting Countries (OPEC), whose 12 member states account for some 40 percent of world’s oil output, decided not to cut production in late November. The decision was allegedly a bid to squeeze cheap-oil producers out of the market. The Saudis, however, argued that the slump in oil prices reflected global supply and demand, stating that they would never use trade to influence geopolitics.

The Russian economy, like the economy of many oil producing nations, is highly dependent on oil revenues and has slowed down in the past months following the low oil prices.

Russia's Anti-Crisis Plan to Be Based on Current Oil Prices