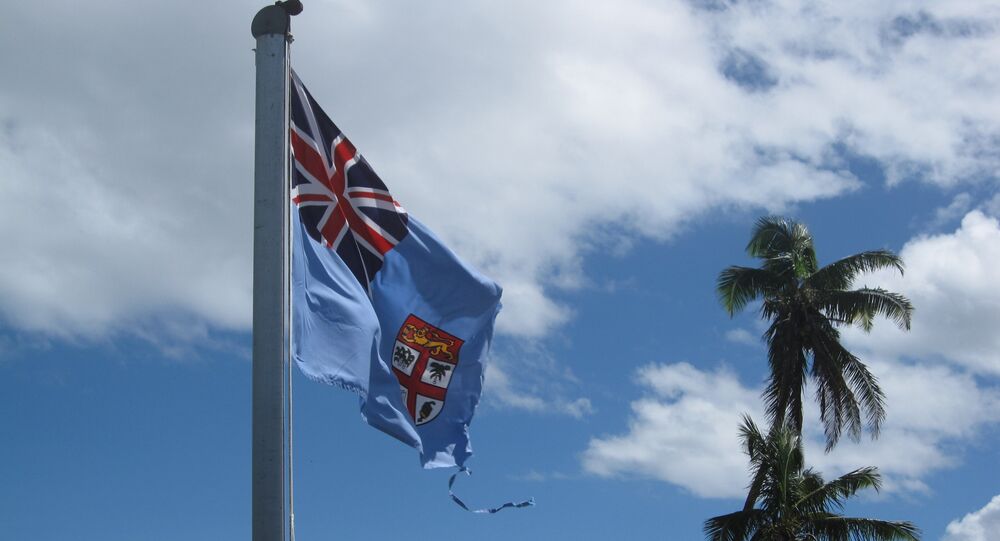 Fiji needs to replace the symbols on its flag that are out of date and no longer relevant, including those "anchored to its colonial past", the Fijian prime minister said.

© RIA Novosti . Alexander Astafiev
Australia, US Withdraw Sanctions Against Fiji After Democratic Elections
MOSCOW (Sputnik) — Fiji is to remove Britain's Union Jack from its flag and replace it with a symbol that better reflects the country as an independent state, the Fijian prime minister announced Tuesday.

"We need to replace the symbols on our existing flag that are out of date and no longer relevant, including some anchored to our colonial past. The new flag should reflect Fiji's position in the world today as a modern and truly independent nation state," Voreqe Bainimarama said in his speech published by the Fiji Sun newspaper.

The current Fijian flag is light blue with the Union Jack — the national flag of the United Kingdom — as well as a shield with the cross of St George, a lion, a sugar cane, bananas, a palm tree and a dove of peace.

As much as Fiji had and will continue to have friendly relations with the United Kingdom, the British Lion and the Cross of St George, a British patron saint, are a symbol of the colonizer and do not reflect Fiji's present and future, Bainimarama added.

According to the prime minister, while proposing that the blue background be upheld, the new national symbol will be selected via consensus.

"All Fijians, including school children, will be encouraged to enter a national competition for the design of this new national symbol," the prime minister said.

The new symbol will be revealed on the 45th anniversary of Fiji's independence on October 10, Bainimarama said.

Fiji gained independence from Britain in 1970 but only in 2014 did the country hold its first democratic election. Prior to that, the country was mainly under a military regime.

Only four Commonwealth nations still have the Union Flag as part of their national symbols — New Zealand, Australia, Tuvalu and Fiji.

While Australia is not keen on changing their national symbol, New Zealand is to hold a referendum later this year on removing the Union Jack from its flag, to be followed by a second binding referendum in 2016.