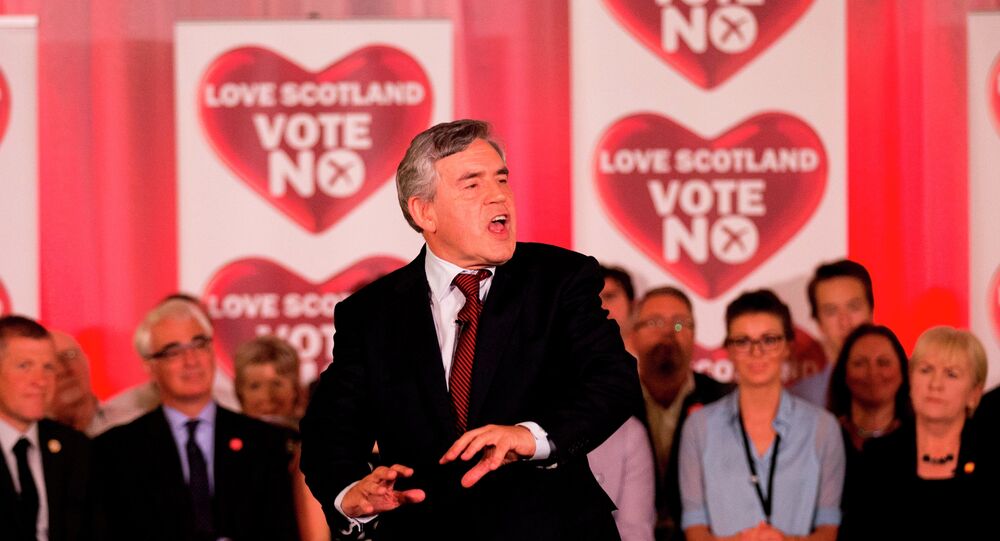 Scotland's Labour party has brought in ex-Prime Minister Gordon Brown in a bid to avert a complete rout at the next general election, following a huge rise in support for the Scottish National Party (SNP). But his promises will not be enough to stop Labour's slide in Scotland.

LONDON, February 2 (Sputnik) — The Scottish Labour party has been in meltdown since the start of the Scottish Independence campaign. First, it played second fiddle to the SNP as the run-up to the referendum, in which Scotland voted 55.3% to stay in the United Kingdom. And second, its former leader, Johann Lamont resigned, accusing her Westminster colleagues as "dinosaurs" who treated the Scottish Labour party "like a branch office of London".

Great coverage ahead of @jimmurphymp and Gordon Brown's speech today on more powers for the Scottish Parliament. pic.twitter.com/SqKESHRPlx

Labour support slumped during the referendum campaign because of the resurgence of support for the SNP and a huge publicity machine that sent shudders down the spines of the main party leaders in the UK. All thee — Cameron, Miliband and Nick Clegg — made a series of promises, including giving Scotland some tax-raising powers and more say over public services, including the NHS.

Brown took over from Tony Blair, after a long behind-the-scenes leadership battle. The two men had agreed, it is said, in the summer of 1994 — ahead of Blair's first landslide victory in 1997 — that Brown would not contest the Labour leadership following the death of John Smith. In return, Blair would — after an unspecified period — stand down in favour of Brown.

As Blair delivered three consecutive wins and was heading for his tenth year, it became clear that Brown was angry at Blair not standing aside. Not only did Brown develop a reputation for broodiness, but his temper outbursts became legendary. In the end he became PM and then managed to preside over the biggest banking collapse in living memory, became one of the most unpopular Prime Ministers of modern times and lost the next election.

From that moment, he was sent out into the wilderness by Labour. It took six months to make his first speech from the backbenches and he took part in just nine debates in the first four years after his defeat.

Come the mad panic over Scottish independence, however — when Labour and the Tories suddenly realised they had underestimated the support for the Yes campaign — Labour wheeled out their biggest gun — Gordon Brown. 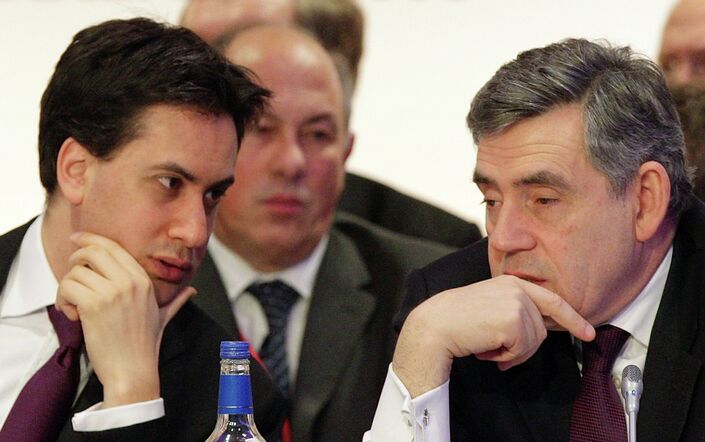 He stepped into the debate, with the most prosaic speech in the whole campaign. "At last, the world is hearing the voices of the real people of Scotland.

"The silent majority will be silent no more. And our patriotic vision, proud of our Scottish identity, proud of our distinctive Scottish institutions, proud of the Scottish Parliament that we, not the Nationalist party, created.

"And proud that with the powers of the Parliament we can guarantee that the National Health Service will be in public hands, universal, free at the point of need, as long and as ever as the people of Scotland want it."

It was a thundering performance for the Better Together campaign and is widely believed to have swayed the vote. However, his intervention was not enough to stop the slide in support for Labour in Scotland. The latest polling shows the SNP on 43% against Labour's 27%.

Following the referendum, when Johann Lamont resigned, Jim Murphy took over as leader. Yet that did not bode well for Ed Miliband. Murphy — a former Secretary of State for Scotland — backed Ed Miliband's brother, David, in the battle to win the leadership of the national party. Murphy was his campaign manager. David Miliband lost out to his brother, Ed, and fled to the United States.

That left Labour with a huge headache. Having been accused by its own former regional leader of treating Scotland "like a branch office", Ed Miliband cannot be seen to be running the affairs of Scottish Labour from London.

His only big ammunition — ironically — is to call for the help of the previously unpopular bad-tempered Brown. On the first day of his support for the campaign, Brown promised a "distinctive Labour change" and set out a series of policy promises for Scotland.

Labour has today wheeled out Gordon Brown to call for more welfare spending. This is Ed Miliband's election strategy. Seriously?!

However, the promises made ahead of the referendum still stand — whatever party is returned in Scottish seats. The Smith Commission into the extra powers promised to keep Scotland inside the UK, and is focused on setting income tax rates, keeping the first 10% of VAT, more control over benefits and ring-fencing the NHS in Scotland.

So, in spite of wheeling out Gordon Brown, Labour still has an uphill battle. Westminster has already given its concessions to Scotland following the referendum. Scotland has won its extra powers. What more can Labour offer the Scottish voter than what has already been achieved? And Gordon Brown's not standing in Westminster next time anyway!

Gordon Brown to Announce Resignation as Member of Parliament: Reports