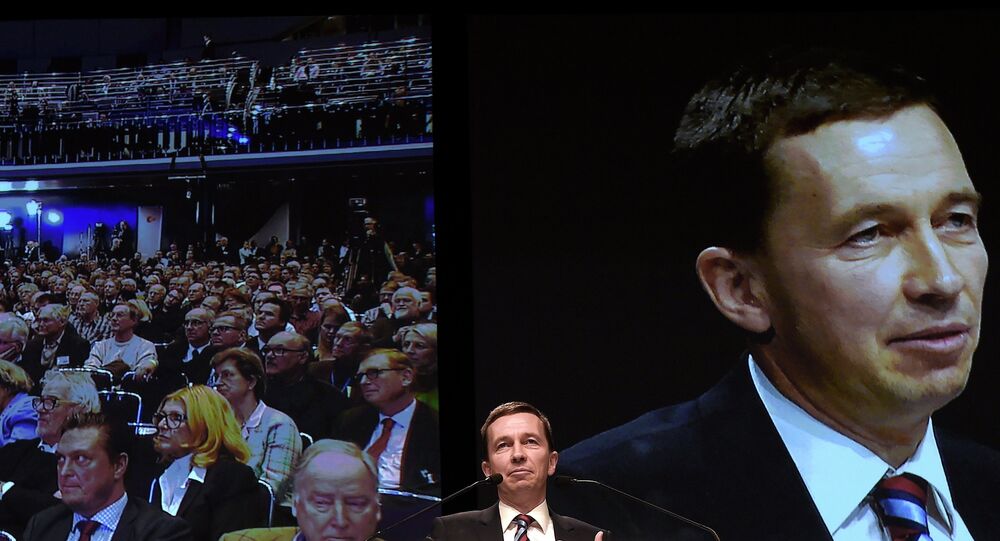 The Euro-skeptic party Alternative for Germany concluded its congress in Bremen on Sunday, deciding to reorganize its leadership structure to 'professionalize' the organization for future regional, national and EU election campaigns.

© REUTERS / Hannibal Hanschke
Too Early to Speak of Pegida’s End After Leadership’s Resignation, NGO Says
MOSCOW, February 1 (Sputnik) — Germany's right-wing populist party Alternative for Germany (AfD) has decided to restructure its leadership structure, reducing the number of chairs from three to one following a Congress.

Bernd Lucke, the party's founder, won the support of two-thirds of the 1,473 delegates on Saturday at the Bremen Congress Center in the northwest of the country. The party is now set to have just one chairperson by December.

The AfD is "not a bowling club or a rabbit breading association that we can run in our spare time," Lucke told delegates on Saturday, noting that the three-chair leadership's record over two years has been "botched," and is in need of "professionalization," Reuters reported.

The two year old, 20,000 member party has been gaining strength in several state parliaments in the country's east, and in the European Parliament, where it gained 7 of the 96 seats reserved for Germany at the May, 2014 elections. It has no representation at the Bundestag.

About 7,000 left-wing protesters and trade unionists came out to protest the congress on Sunday, up from about 3,500 a day earlier. The protesters carried signs saying that the "AfD, PEGIDA and Co." are not welcome in their city, referencing the right-wing anti-immigration protest movement known as the 'Patriotic Europeans Against the Islamization of the West.' AfD's anti-immigration stance has been described as racist and Islamophobic by leftist groups.

© AFP 2020 / CARMEN JASPERSEN
Protestors and policemen face off during a demonstration against the AfD (Alternative for Germany) Party Congress in Bremen, northwest Germany.

The AfD exploded onto the German political scene in early 2013 with a right-wing Euro-skeptic platform, including populist calls for law and order, immigration reform and family values. The party is still finding its ideological way, and expects to finalize its programme in November. One of the party's current co-chairs, Frauke Petry, criticized Lucke for the latter's support of sanctions against Russia, and noted that the US and NATO are far more dangerous for European and global security than Russia.

© REUTERS / Kai Pfaffenbach
Protesters in Eastern Germany Object to Idea of Leftist State Government
Lucke told delegates on Sunday that he supports the new Greek government's demands to recalculate debt, but notes that Greece must exit the Eurozone in return.

A Hamburg regional election coming up in two weeks is expected to serve as a test for whether the party can win seats in state parliaments outside the country's east.