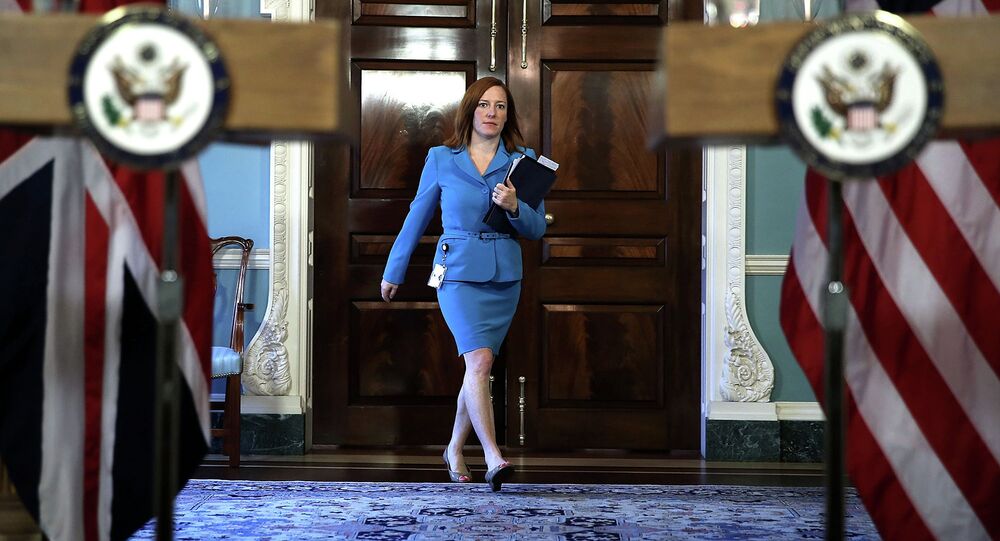 US Department of State spokesperson Jen Psaki has refuted former Soviet President Mikhail Gorbachev's recent statement that the US had dragged Russia into a new Cold War.

© Sputnik /
Former Soviet Leader Urges US and EU to "Defrost Relations" With Russia
WASHINGTON, January 30 (Sputnik) — Washington disagrees with former Soviet President Mikhail Gorbachev that the United States is in another Cold war with Russia, which might turn into a "hot" one, spokesperson for the US Department of State Jen Psaki told journalists.

“We disagree,” Psaki said Thursday about Gorbachev’s comments, stressing that the United States continues to work with Russia on various issues including Iran, Syria, and Ukrainian conflict. “We have discussions about a range of issues, even the tensions on the ground in the Middle East. That’s continuing.”

The spokesperson noted that Washington’s intention is to “bring an end to illegal actions that are happening in Ukraine.”

“That’s why we continue to work with the Europeans to put in place more consequences,” she said.

© REUTERS / Francois Lenoir
Greek Foreign Minister Calls for Dialogue With Russia
Gorbachev said on Thursday that the United States has already dragged Russia into a new Cold War, trying to openly implement its idea of triumphalism. He also suggested that the Cold War might evolve into the “hot.”

The relations between Russia and the West started to deteriorate in 2014, triggered by the Ukrainian conflict. Moscow has repeatedly expressed its willingness to promote a peaceful dialogue and to cooperate with its partners on the basis of mutual respect.

Following Crimea’s reunification with Russia last March, the United States, the EU and their allies accused Moscow of involving into the conflict and imposed several rounds of sanctions targeting Russia’s banking, defense and energy sectors, as well as some individuals.

Moscow denies any direct involvement in the Ukrainian crisis, other then helping to bring the warring parties to the negotiation table, and considers the policy of sanctions illegal and counter productive.

The United States welcomes the decision of European Union foreign ministers to keep sanctions, targeting individuals and entities allegedly involved in the escalation of the Ukrainian crisis, in addition to adding more names to the list, Department of State spokesperson Jen Psaki said.

© REUTERS / Ints Kalnins
EU FMs Decide to Extend Individual Sanctions Over Ukraine Until September
“We [the United States] welcome it, it's a positive step,” Psaki said when asked whether the Department of State welcomed the EU’s move to add more names of individuals and entities to the sanctions list.

"This has been a building process and the EU and the US have put in place a range of sanctions on sectors, on individuals and this is just a further sign that the actions of the last days and weeks are absolutely unacceptable and there will be new consequences put in place,” Psaki said.

Do you think Russia and the US are heading back towards Cold War?
Voted: 1
All polls
When asked whether the United States thought sanctions on Russia was persuading Moscow to back off, Psaki said that there was no question that sanctions put in place “have had an enormous impact on the economy of Russia,” but that it was up to the country and Russian President Vladimir Putin to “make a choice” whether to see the sanctions eased or “continue down this detrimental path.”

Psaki also said that she had “nothing to predict” on whether the United States would make a similar move to the EU in ratcheting up sanctions on individuals involved in the Ukrainian crisis.

The United States and its allies have imposed multiple sanctions targeting Russia’s banking, energy and military sectors, as well as several high-profile individuals, over Moscow’s alleged interference in Ukraine’s internal affairs. The EU imposed the first set of travel bans and asset freezes against individuals and entities allegedly responsible for destabilizing Ukraine in March 2014.