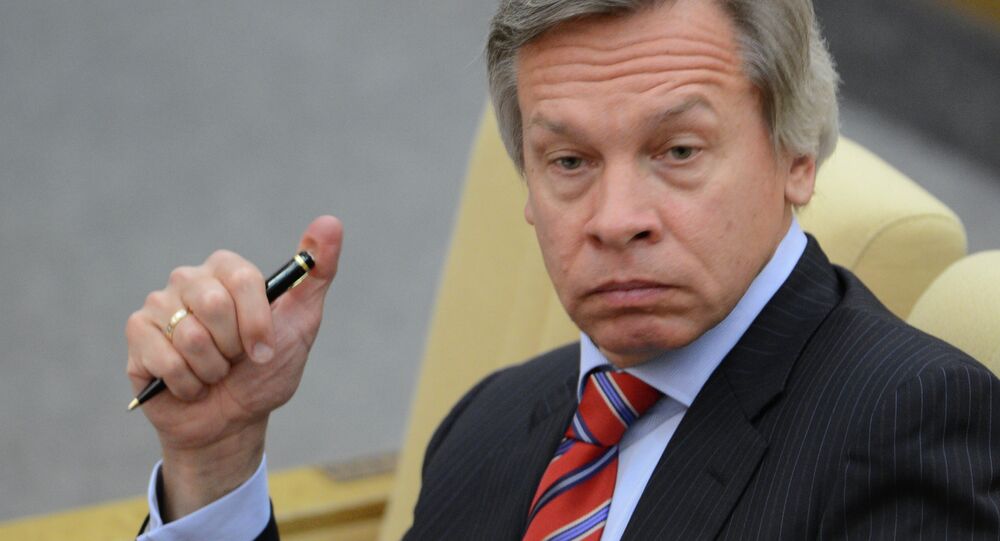 According to a Russian delegate, Moscow was not planning to leave the PACE session, but would act in accordance with the decision on Russia's voting rights.

© Sputnik / Vladimir Fedorenko
British Delegate Challenges Russia's Credentials in PACE Over Ukraine
STRASBOURG, January 26 (Sputnik) – The Russian delegation to the Parliamentary Assembly of the Council of Europe (PACE) will not leave the current session unless sanctions are renewed against Russia, Russian delegate Alexei Pushkov said Monday.

"They should understand whether they want to have Russia as one of the leading countries in Europe among its members," Pushkov said adding it is difficult to talk of the European security or a successful solution of crises without Russia.

Pushkov added that "PACE will have Russia no longer," should sanctions against the country be extended. In that case, Russia would shift its focus to the Organization for Security and Cooperation in Europe (OSCE) and its parliamentary assembly.

© Sputnik / Grigory Sysoev
PACE to Discuss Credentials of Russia's Delegation Wednesday
"PACE will stay on the margins of the political process," Pushkov added.

Earlier on Monday, newly elected PACE President Anne Brasseur scheduled the review of Russia's credentials for late Wednesday afternoon, adding that the decision made in April 2014 to deprive the country of its voting rights had expired.

"I think the vote on Wednesday will be held with the odds slightly in our favor," Leonid Slutsky, PACE delegate and head of Russia's lower parliamentary house committee for Commonwealth of Independent State (CIS) affairs, said at the the winter session.

He expressed hope that Russia's work at PACE "will bring us more allies," adding that he was confident the assembly would "make the right decision."

Russia's voting rights were suspended in the wake of Crimea's reunification with the country. The Russian delegation then walked out of PACE's spring session and boycotted the summer session in protest.

Last week, the chairman of Russia's lower parliamentary house, Sergei Naryshkin, said that Russia could suspend its work at PACE and even reconsider its membership in the Council of Europe, should the Russian delegation continue to be deprived of voting rights.

PACE's five-day winter session kicked off earlier on Monday, with the Russian delegation's credentials, the humanitarian situation in Ukraine and the January 7 terrorist attacks in Paris expected to be on the meeting's agenda.