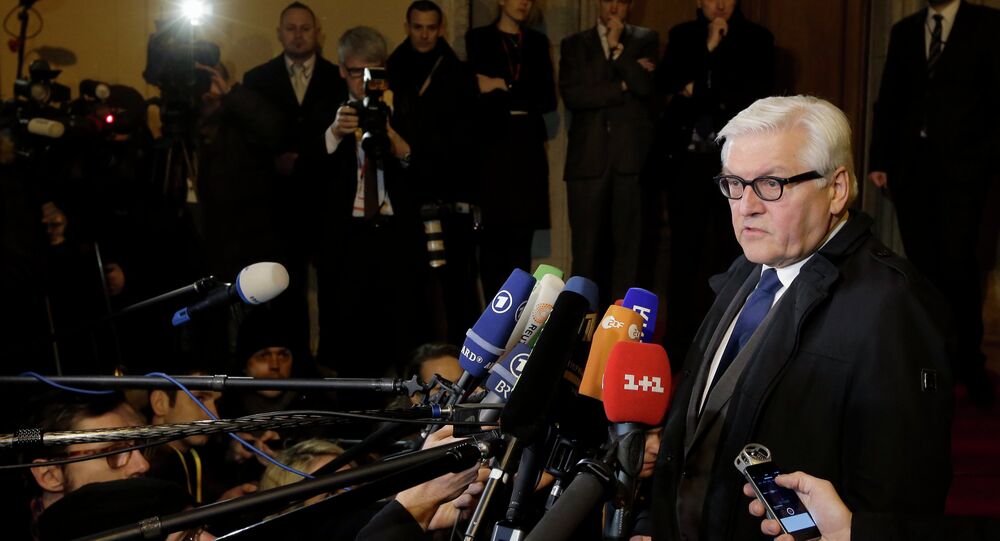 German Foreign Minister reportedly said that some of the country's peace efforts could be "thwarted by some".

MOSCOW, January 25 (Sputnik) – German Foreign Minister Frank-Walter Steinmeier has stressed that Germany's mediation in negotiations to resolve the situation in Ukraine is important, although some of its peace efforts are being hampered, DPA reports.

According to DPA, Steinmeier said Saturday, during his visit to Algeria that Germany should play a role in restoring peace in the conflict-torn Ukraine, but its efforts could be "thwarted by some".

On Thursday, the foreign ministers of Russia, Ukraine, Germany and France met in Berlin for Normandy format talks on Ukraine. The reunion was held in the run-up to the high-level Normandy format summit expected to be held at the end of this month in Astana, Kazakhstan.

Steinmeier Comments on Consequences of Failure to Stick to Minsk Agreements on Donbass
The ministers emphasized the urgent need to obey by the Minsk agreements, reached last year in September during meetings of the trilateral Contact Group on Ukraine, which comprises representatives from Kiev, the self-proclaimed people's republics of Donetsk and Luhansk (DPR and LPR), Russia and the Organization for Security and Co-operation in Europe (OSCE).

The agreements stipulate the implementation of a ceasefire in southeastern Ukraine, an all-for-all prisoner exchange and the withdrawal of heavy weaponry along the agreed line of contact.

A fresh Contact Group meeting was planned to be held on January 16, but Kiev representatives failed to arrive at the talks in Minsk.

The military conflict in southeastern Ukraine started last spring when Kiev launched a military operation against local residents who refused to recognize the new Ukrainian government, which came to power as a result of a coup.

Kiev forces have recently intensified shelling in the southeastern region of Donetsk, having officially acknowledged that a major operation was being carried out against independence fighters at the Donetsk airport.

Progress Could Be Achieved in Ukraine Crisis Settlement in 2015: Steinmeier