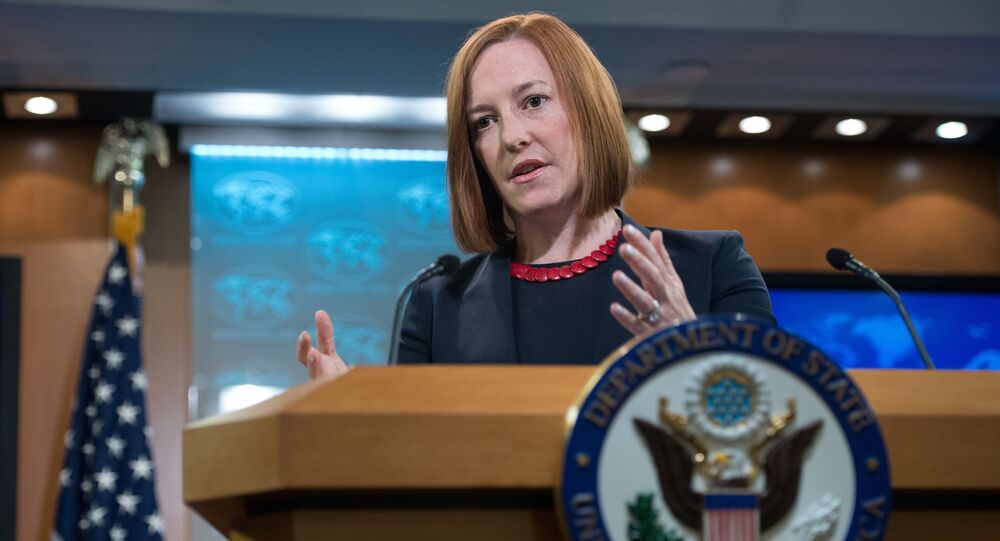 US Department of State spokesperson said that Russia is responsible for resolving the conflict in Ukraine.

WASHINGTON, January 23 (Sputnik) — Russia is responsible for resolving the conflict in Ukraine and ending the violence in the region, US Department of State spokesperson Jen Psaki said during a press briefing on Friday.

“Russia holds the keys to peacefully resolving a conflict [in Ukraine]. It started and bears responsibility to end the violence which has devastated the lives of so many innocents in Donesk and Luhansk,” Psaki said.

© Sputnik / Valery Melnikov
Russian Deputy FM Urges Int'l Community to Stop Blaming Russia for Situation in Ukraine
Psaki added that the United States “remain deeply concerned by the increasing violence and bloodshed in Eastern Ukraine,” which she said had resulted from “a surge in Russia-backed separatist attacks against the ceasefire line.”

Russia has repeatedly denied accusations of its involvement in the Ukrainian crisis and continues to urge parties involved to establish direct dialogue.

Over 5,000 people have died in the Ukrainian conflict since April 2014, a spokesperson for the UN High Human Rights Office said in a statement on Friday.

The crisis in Ukraine escalated in April 2014 when Kiev launched a military operation suppressing the independence supporters of Luhansk and Donetsk regions who refused to recognize the coup-imposed central government.

A ceasefire agreement, brokered by Russia and the Organization for Security and Co-operation in Europe, was signed between the conflicting sides in September. On December 9, a “silence regime” was declared in a bid to revive peace negotiations between the sides.

However, after the implementation of the ceasefire, both Kiev and the authorities of Donetsk and Luhansk people’s republics have repeatedly accused each other of violating the truce.