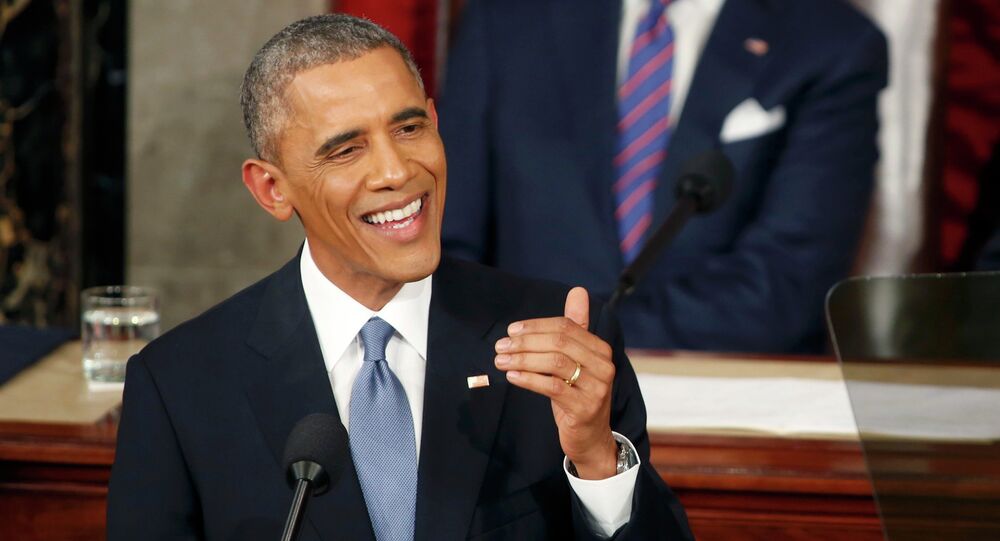 Amid the recent transfer of five Guantanamo Bay prisoners to Oman and Estonia, Obama once again pledged to close the detention facility, a promise he first made during his election campaign. Another doubtful assertion, amid Moscow’s increased cooperation with the BRICS and Latin America, is that US sanctions policies had “isolated” Russia.

© REUTERS / Kevin Lamarque
‘What a Dreamer’: Russian Deputy PM on Obama’s State of the Union Address
MOSCOW, January 21 (Sputnik) — US President Barack Obama in his Tuesday State of the Union address once again promised to close the Guantanamo Bay prison facility and praised US diplomatic efforts by claiming that anti-Russia sanctions had “isolated” Moscow.

Amid the recent transfer of five Guantanamo Bay prisoners to Oman and Estonia, Obama once again pledged to close the detention facility, a promise he first made during his election campaign.

“Since I’ve been President, we’ve worked responsibly to cut the population of Gitmo in half. Now it’s time to finish the job,” Obama said, restating the goal he set in the last year’s State of Union. “This needs to be the year Congress lifts the remaining restrictions on detainee transfers and we close the prison at Guantanamo Bay,” he said in 2014.

Another doubtful assertion, amid Moscow’s increased cooperation with the BRICS and Latin America, is that Washington’s sanctions policies had “isolated” Russia, a claim, Obama has also made many times before.

© REUTERS / Kevin Lamarque
‘What a Dreamer’: Russian Deputy PM on Obama’s State of the Union Address
“We are demonstrating the power of American strength and diplomacy. We’re upholding the principle that bigger nations can’t bully the small — by opposing Russian aggression, supporting Ukraine’s democracy, and reassuring our NATO allies,” Obama said.

In his address President Obama said little about the issues US society has been facing over the last year, for example, police brutality and racial profiling. He only mentioned Ukraine only while speaking about anti-Russia sanctions, and devoted most of his speech to domestic economic issues, including the gender wage disparity.

“This Congress still needs to pass a law that makes sure a woman is paid the same as a man for doing the same work,” Obama said, obviously overlooking that the Equal Pay Act, abolishing gender pay disparity, was enacted by the 88th US Congress and signed into law by President Kennedy in 1963.

© REUTERS / Stringer
Obama’s Speech on Battling IS Shows New US Approach to Syrian Crisis, Lavrov Says
The war against terrorism and climate change were among the few international issues US president touched upon in his speech.

“In Iraq and Syria, American leadership — including our military power — is stopping ISIL’s advance. Instead of getting dragged into another ground war in the Middle East, we are leading a broad coalition… to degrade and ultimately destroy this terrorist group,” Obama said.

However, he stressed that the United States reserves the right “to act unilaterally” in order to “hunt down terrorists and dismantle their networks” worldwide.

Regarding climate change, Obama mentioned the joint announcement the United States and China made in November, 2014 pledging to speed up the pace at which two countries reduce their CO2 emissions. “The Pentagon says that climate change poses immediate risks to our national security. We should act like it,” Obama stressed.

Concluding his speech, Obama said that “fifteen years into this new century, we have picked ourselves up, dusted ourselves off, and begun again the work of remaking America” and called on Americans to start work on “the new chapter” right now, almost echoing the end of his 2013 State of Union address.

Obama’s Speech on Battling IS Shows New US Approach to Syria, Lavrov Says

‘What a Dreamer’: Russian Deputy PM on Obama’s State of the Union Address