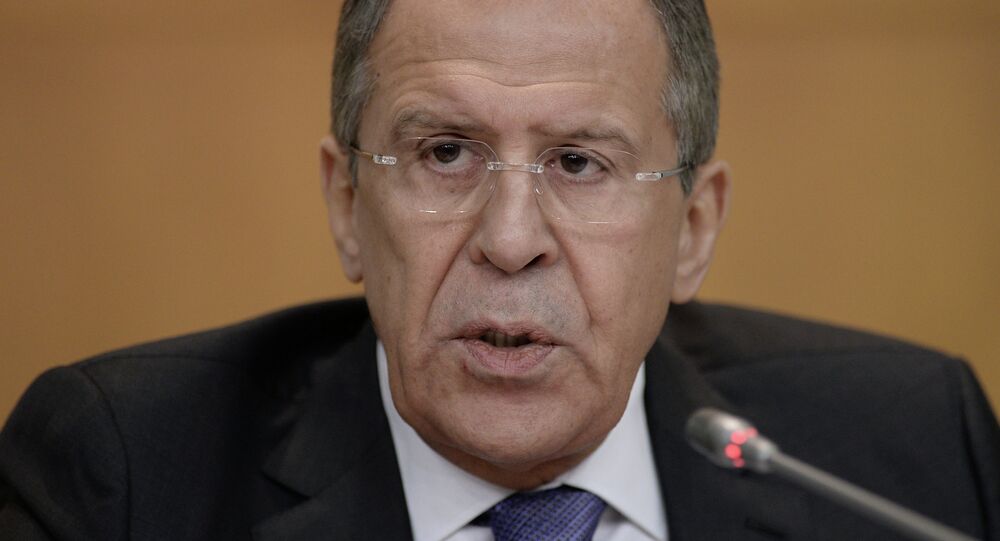 Russia calls on the US to return on the path of constructive mutual activities, because both countires carry great responsibility in the international arena, Russian Foreign Minister Sergei Lavrov said.

"Relations between Moscow and Washington have become seriously acute on the American front. The US administration has wrapped up bilateral dialogue in most areas. We call on our American partners to return to the path of constructive mutual activities on bilateral issues as well as on the world arena where our countries carry great responsibility," Lavrov said during a press conference in Moscow.

US President Barack Obama’s address shows that the United States wants to be the dominant power in the world and not settle for just being "the leader of the pack," the minister said.

"The Americans have taken a path of confrontation, completely and uncritically assessing their own steps, and President Obama’s speech yesterday shows that there is only one in the center of [his] philosophy: We are Number One. And everyone else just needs to understand that," Lavrov said during a press conference in Moscow.

According to Lavrov, the United States is incapable of solving problems alone and is forced to form coalitions.

"The Americans have already been forced to turn for help and form coalitions as they cannot solve any issue all alone: This happened in Iraq and is continuing in the fight against the so-called Islamic State," Lavrov said.

Nearly a half of the European Union countries support the idea of lifting sanctions imposed on Russia over the Ukrainian crisis, Russian Foreign Minister Sergei Lavrov said Wednesday.

"We know that different points of view are expressed within the European Union, but this stage, when almost half of the member states start to insist on lifting the sanctions, shows that when such decisions are made, based on collective responsibility, mechanically, following the US partners… then it becomes very difficult to ‘pull back’," Lavrov said during a press conference in Moscow.

"We hear a lot of statements from our western partners about the need to isolate Russia. President [of the United States Barack] Obama thought it was appropriate to say almost the same during his address to the nation yesterday. All these attempts will yield no results," Lavrov said, at a press conference in Moscow.

On Tuesday, Obama said in his State of the Union address that the United States stands strong with its allies, while Russia is "isolated, with its economy in tatters."

According to Lavrov, Russian President Vladimir Putin made it clear in his address to the Federal Assembly that "Russia will never choose the way of self-isolation, suspiciousness and search for enemies."

"We are very concerned over the new outbreak of violence in southeastern Ukraine. This was preceded by threatening statements out of Kiev, President [Petro] Poroshenko’s announcement of new waves of [military] mobilization that will begin with 100,000 people. During the pretty quiet period that was there until recently, new weapons, new equipment and military contingents have moved toward the southeast [of Ukraine]," Lavrov said during a press conference in Moscow.

Clashes between Kiev forces and Donbas independence supporters intensified in the first weeks of 2015, despite a ceasefire agreement reached during talks in Minsk on September 5 and a "silence regime" introduced in the region on December 9.

"Following President Poroshenko’s reaction that we received, only verbally for now, in response to President Putin’s address from January 15, we could feel that he is ready to discuss this, but he raises some questions, some of which are technical. And these can be agreed upon," Lavrov said at a press conference.

According to Kremlin spokesperson Dmitry Peskov, last week Putin sent a written message to Poroshenko, outlining a plan for the withdrawal of heavy weaponry from the area of armed conflict between Kiev government forces and independence supporters in eastern Ukraine. However, Peskov said that Kiev rejected the proposed plan, without a counter offer.

"I think that this is a mutually beneficial and a mutually acceptable process. It has already started, some steps have already been taken, contracts on discussion of specific steps on the restoration of relations are being prepared, and so on. We do not see anything bad in this, on the contrary, it is useful for Cuban people. And this will not affect strategic relations between Russia and Cuba in a negative way," Lavrov said during a press conference in Moscow.

"I haven’t heard any announcements that the S-300 topic was being discussed. This has its own history and is a subject for our bilateral relations with Iran and that’s how this will be considered within the frameworks of our relations," Lavrov said during a press conference in Moscow.

There is every reason to expect that P5+1 negotiations with Iran on its nuclear program will be fruitful, Russian Foreign Minister Sergei Lavrov stated Wednesday.

"Russian efforts within the framework of the six [P5+1 group of international mediators] contributed to the progress in resolving the situation around Iran's nuclear program. The work is continuing and despite remaining challenges there is every reason to expect the result," Lavrov said during a press conference in Moscow.

US President Barack Obama’s statements regarding the fight against Islamic State militant group made during his State of the Union address on Tuesday show that Washington has adopted a new approach toward the situation in Syria, Russian Foreign Minister Sergei Lavrov said Wednesday.

"Returning to Tuesday’s President Obama’s speech, a part regarding a purpose of the fight against Islamic State was formulated in a different way. The goal of defeating these terrorists was named the most important among everything else that concerns overcoming the Syrian crisis," Lavrov said at a press conference.

© AP Photo / albaraka_news, File
Islamic State Beheads, Crucifies Five in Deir Ezzor Province of Syria
"It is good that this understanding increases. The most important part is to transform this to practical actions as soon as possible," Lavrov added.

Lavrov is going to focus on the situation in eastern Ukraine and discussed a plan on peaceful settlement of the crisis, US-Russian relations and fighting against terrorism.