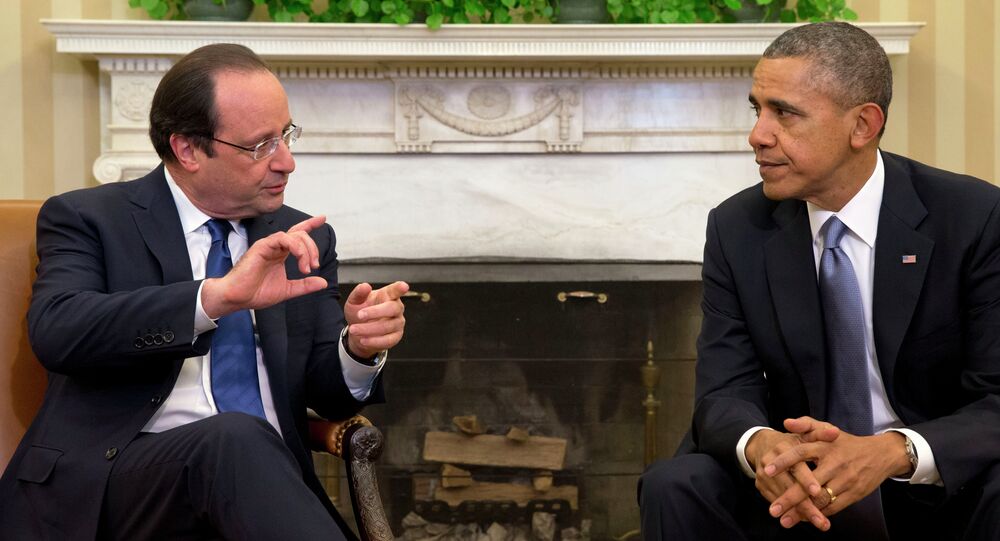 US President Barack Obama and French President Francois Hollande agreed to maintain sanctions on Russia and to provide additional funding to Ukraine in a phone conversation on Tuesday.

© Photo : White House / Pete Souza
Obama, Hollande Discuss Investigation Into Paris Terror Shootings
WASHINGTON, January 21 (Sputnik) — US President Barack Obama and French President Francois Hollande have agreed to maintain sanctions on Russia and on the importance of providing additional funding to support the Ukrainian government amid the ongoing crisis in Kiev which has pushed the country to the verge of default, the White House announced in a statement on Tuesday

“They [President Obama and Hollande] also discussed the situation in eastern Ukraine and the need to maintain sanctions against Russia in the absence of implementation of the Minsk agreements,” the White House statement read. “And they agreed upon the importance of providing additional financial support to the Ukrainian government. “

The United States has provided Ukraine with some $340 million in assistance in 2014, in addition to the $1 billion sovereign loan guarantee provided in May 2014.

Amid the ongoing crisis in Ukraine, Kiev has found itself on the verge of a default and has tried to rescue its economy through international loans. During the spring of 2014, the International Monetary Fund promised Kiev a total of $17 billion in bailout loans, to be paid over the course of two years.