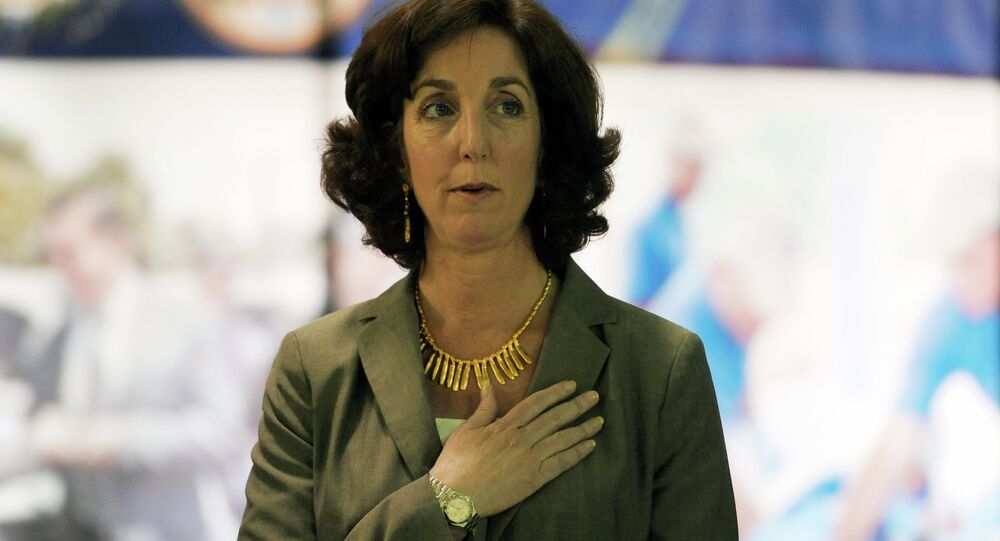 Assistant Secretary of State for Western Hemisphere Affairs Roberta Jacobson will pay an official visit to Havana, Cuba on January 21-24 for previously planned Migration Talks to launch a discussion with the Cuban Government on re-establishing diplomatic relations.

© AP Photo / Desmond Boylan, File
60 Percent of Americans Support Restoration of Ties With Cuba
WASHINGTON, January 21 (Sputnik) — US Assistant Secretary of State Roberta Jacobson will pay a historic visit to Cuba this week for negotiations on immigration and re-establishing diplomatic ties between Washington and Havana after decades of animosity, according to the US State Department.

“Assistant Secretary of State for Western Hemisphere Affairs Roberta Jacobson will travel to Havana, Cuba on January 21-24 to take advantage of previously planned Migration Talks to launch a discussion with the Cuban Government on re-establishing diplomatic relations,” the US State Department press release said on Tuesday.

On December 17, 2014, US President Barack Obama announced Washington’s decision to reestablish diplomatic relations with Cuba and ease five-decade-long US trade and travel restrictions on the island.

The agenda of this week’s US-Cuba negotiations on reestablishing diplomatic relations will include technical and logistical arrangements, such as “embassy operations, staffing, and visa processing,” according to the US State Department.

© AFP 2020 / YAMIL Lage
Cuba-US Talks to End 50-Year Standoff
US-Cuba migration talks will begin on Wednesday, and the normalization talks are scheduled for Thursday. Jacobson will hold a press-conference on Friday morning to unveil any reached agreements.

Additionally, while in Havana, Jacobson plans to meet members of independent civil society, as well as religious and independent business leaders, the US Department of State said.

During his new Cuba policy announcement in December, Obama stated that the United States has plans to work together with Havana in areas of mutual interest, such as health, migration, counterterrorism, drug-trafficking and disaster response.

© AP Photo / Wilfredo Lee
Study Reveals US-Cuban Thaw Won't Bring More Americans to the Island
Cuba’s president Raul Castro thanked his US counterpart for the historic move, but noted that future dialogue between the two countries needs to be based on mutual respect, and stressed that Cuba would not give up its political ideas.

Obama also instructed US Secretary of State John Kerry to immediately launch a review of Cuba’s designation as a state supporting terrorism, introduced back in 1982.

Washington ruled out neither President Obama’s visit to Cuba nor hosting Raul Castro at the White House.

Hans Modrow, former prime minister of the German Democratic Republic, who has close ties with Cuban leader Raul Castro, told Sputnik that the reason behind the United States’ shift in policy toward Cuba in to succeed in Latin America, where Cuba has powerful influence.

On the other hand, weakening of Cuba’s benefactors, Venezuela and Russia, due to the drop in oil prices must have been the incentive for Cuba to re-establish its ties with the United States, Jose Azel, Senior Scholar at the Institute for Cuban and Cuban-American Studies at the University of Miami, told Sputnik.

According to the White House, the policy shift will lead to more opportunities for telecommunication firms, construction suppliers and farmers. Some experts predict a positive change for agricultural producers in both countries.

However, former Mexican Foreign Affairs Secretary Jorge Castaneda Gutman said the warming of relations between the United States and Cuba is unlikely to solve Havana’s economic woes in the near future.

Cuba Releases All 53 Political Prisoners on US List: Reports

US Assistant Secretary of State to Visit Cuba on January 21-22: State Dept.

Cuba Releases Some of the 53 ‘Political Prisoners’ on US List

Venezuelan President Congratulates Cuba on Improving Relations With US