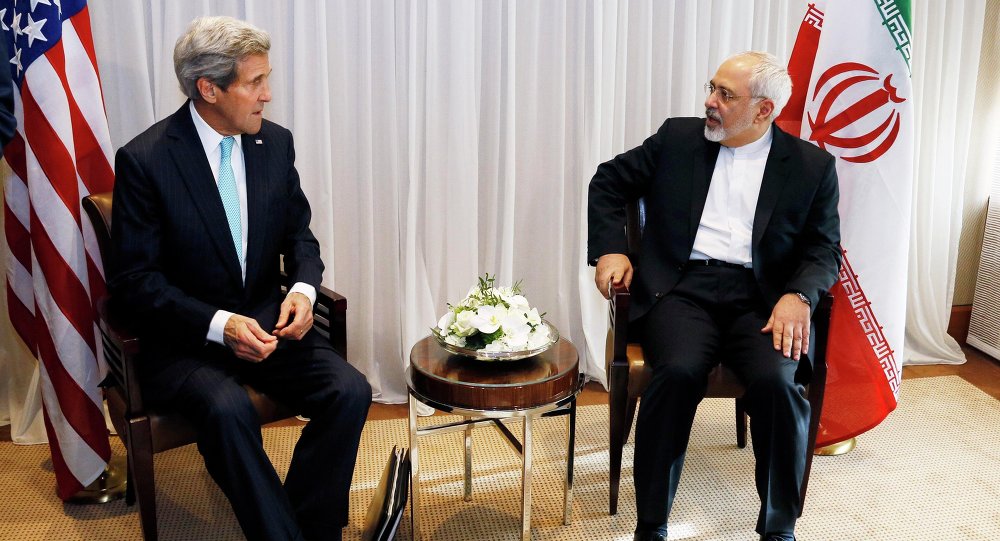 The Iranian Foreign Minister admits that negotiations are tough, but remains hopeful that progress is reached.

© AP Photo / Ebrahim Noroozi
Mogherini, Zarif Stress Vital Need for Iranian Nuclear Agreement
MOSCOW, January 16 (Sputnik) – After a meeting for six hours of talks in Geneva on Wednesday, US Secretary of State John Kerry and Iranian Foreign Minister Mohammad Javad Zarif are back at the negotiating table, this time in Paris, according to AFP.

The talks lasted a little under an hour, according to AFP, and were aimed at discussing the negotiations.

France is an important party in the P5+1 talks, as it holds veto power in the United Nations Security Council, and the country's president, Francois Hollande believes that a definitive agreement has to be made for Iran to be able to develop nuclear energy for civilian, but not military purposes, according to Reuters.

© AP Photo / Ronald Zak
Iranian Foreign Minister Zarif Hopes for Progress in Nuclear Talks
"New and comprehensive ideas should be put forward and we are ready to conclude all the outstanding issues. However, we should see how ready the other side is," Zarif told the IRNA news agency on Thursday, hoping that more progress could be made at the negotiations.

Zarif also told the Tehran Times that the publication of the new Charlie Hebdo cover made things more difficult.

"Unless we learn to respect one another, it will be very difficult in a world of different views and different cultures and civilizations, we won’t be able to engage in a serious dialogue if we start disrespecting each other’s values," Zarif told the newspaper.

The next round of P5+1 talks between Iran and world powers on the question of its nuclear program is due to start on Sunday.

© AP Photo / Virginia Mayo
New Anti-Tehran Sanctions May Undermine Iran Nuclear Deal, Isolate Washington: US Envoy
The P5+1 group of six world powers comprising Russia, the United States, the United Kingdom, France, China and Germany initiated diplomatic efforts back in 2006 in an attempt to reach a deal with the Tehran authorities which would ensure that Iranian nuclear program would not be used to create weapons. Since then, the group has held several meetings with Iran, but the sides failed to reach a compromise.

The latest round of talks between Iran and the P5+1 group, held in November in Vienna did not produce a comprehensive deal on Iran's nuclear program and the sides agreed to continue the discussions until July 2015.