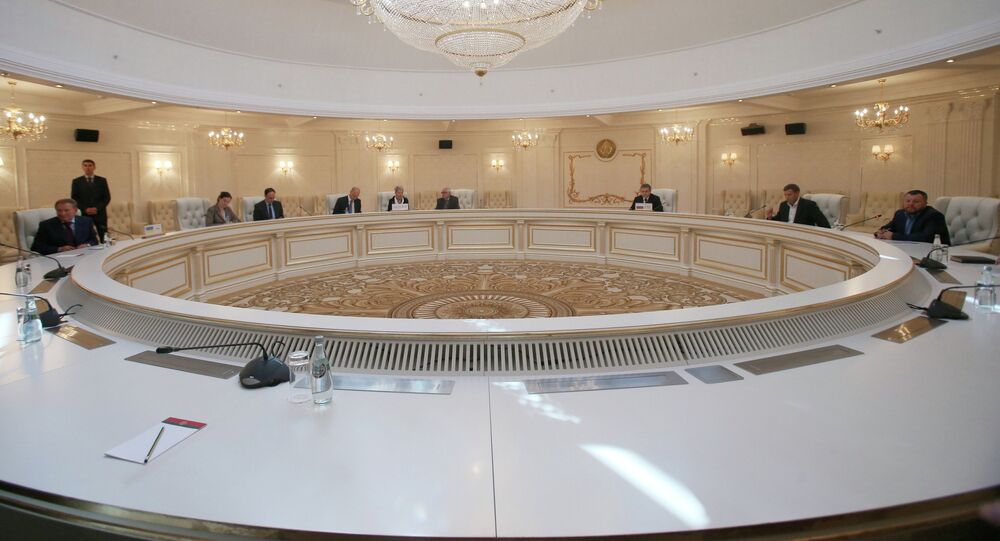 The foreign ministers of Russia, Germany, France and Ukraine call on the Contact group to meet in the coming days to make progress on the full implementation of the Minsk agreements.

© Sputnik / Maksim Blinov
'Normandy Format' Talks on Ukrainian Crisis Begin in Berlin
BERLIN, January 13 (Sputnik) – The foreign ministers of the Normandy quartet (Russia, Germany, France and Ukraine) are urging the Contact Group on Ukraine to meet as soon as possible in order to speed up the peace process in the crisis-hit country.

"Ministers call on the Contact group to meet in the coming days to make progress on the full implementation of the Minsk agreements, including the creation of the relevant conditions for an effective ceasefire, an agreement on modalities for the delivery of humanitarian aid and the continuation of the release of detainees," a joint press release, published on the website of the German Foreign Ministry Monday says.

© Sputnik / Vladimir Astapkovich
Political Process in Ukraine Requires Direct Dialogue Between Kiev, Donbas: Lavrov
According to the statement, a meeting of the Contact Group on Ukraine "would contribute to pave the way to the preparation of a successful summit meeting in Astana".

The statement was issued after German Foreign Minister Frank-Walter Steinmeier held a closed-door meeting with his Russian, French and Ukrainian counterparts in Berlin on Monday. According to Steinmeier, Normandy quartet foreign ministers could meet again in the coming days ahead of the Astana summit.

The "Normandy format" dates back to June 2014, when the leaders of Russia, Germany, France and Ukraine met during celebrations of the 70th anniversary of the allies' Normandy landing in France to lay down a roadmap for a sustainable ceasefire in eastern Ukraine, where Kiev forces launched a military operation against independence supporters last spring.

The heads of the Normandy quartet countries are expected to meet in Astana, Kazakhstan, on January 15-16.

Meanwhile the Contact Group on Ukraine, which includes representatives of Russia, the Organization for Security and Co-Operation in Europe (OSCE), Kiev and the self-proclaimed Donetsk and Luhansk people's republics (DPR and LPR), has been holding meetings in the Belarusian capital Minsk.

The Minsk format talks on Ukraine have resulted in major agreements, including a breakthrough ceasefire deal between DPR, LPR and Kiev. However, both sides to the Ukrainian conflict have accused each other of violating the ceasefire.