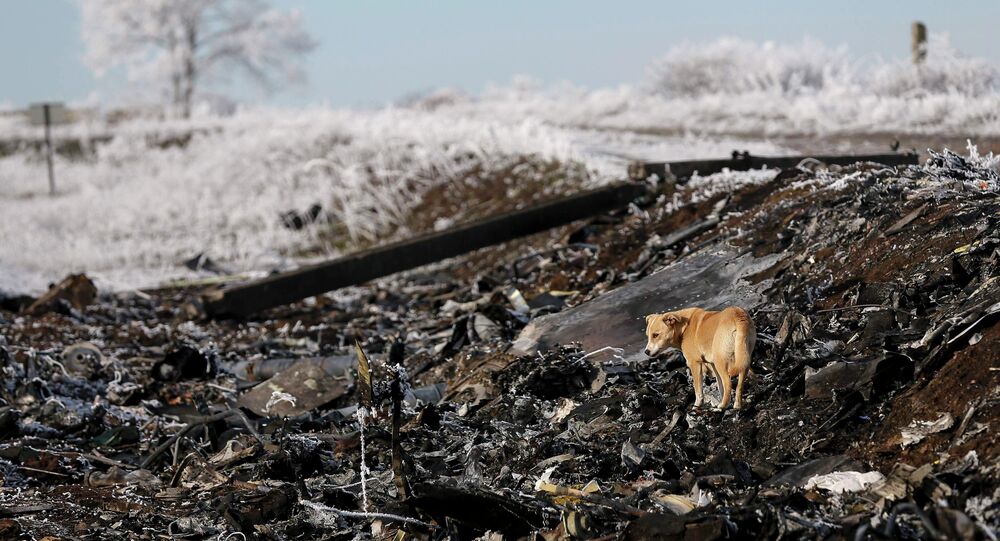 Russian Foreign Minister Lavrov said that despite the fact that part of anti-Russian sanctions had been imposed over the Malaysia Airlines MH17 plane crash in the Ukraine's Donetsk Region, only Moscow was trying to remind about the preliminary results release of the investigation.

“The West announced sectoral sanctions [against Russia] over the Malaysian Boeing catastrophe, but now our Western colleagues have completely forgotten about this problem and only Russia is trying to remind [them] that it wouldn't be bad if they at least announced the preliminary results of the investigation and explain why the investigation is being conducted with gross breaches in norms that are accepted in such occasions by the International Civilian Aviation Orgnization,” Lavrov said during a joint press conference with Latvian Foreign Minister Edgars Rinkēvičs.

On July 17, 2014, Malaysia Airlines flight MH17, en route from Amsterdam to Kuala Lumpur, crashed in eastern Ukraine. None of the 298 people on board survived the crash.

In September, the Dutch Safety Board released a preliminary report that stated that the aircraft had been hit by numerous high-energy objects and broke up in mid-air.

© Sputnik / Igor Maslov
Kiev Has Unilaterally Scrapped Ceasefire Regime: Donetsk Leader
A former Ukrainian airbase employee suggested in December that the Boeing might have been downed by a Ukrainian Su-25 aircraft carrying an air-to-air missile. The witness also identified the Su-25 pilot, but the Ukrainian Security Service said Capt. Vladislav Voloshin was not on duty the day the Malaysian aircraft crashed.

Moscow has information that Kiev is preparing another attempt to solve the political crisis with the country’s east by using military force, Russian Foreign Minister Sergei Lavrov said Monday.

“We have information that the military is preparing another attempt of force in the near future to solve the problem [in eastern Ukraine], which is quite alarming and we are currently rechecking this. This will be a catastrophe,” Lavrov said.

“There is information that mobilization has been announced and the Ukrainian leadership doesn’t deny this. Various numbers are being used, from 50,000 to 200,000-something individuals need to be mobilized into the army and other military structures,” Lavrov added.

A ceasefire has been in place in the war-torn eastern Ukrainian regions since September 9. However, the conflicting sides have repeatedly accused each other of violating the truce.

Moscow calls on the West to use influence to convince Kiev to avoid military scenario in the development of events in Ukraine, Russian Foreign Minister Sergei Lavrov said Monday.

© Sputnik / Maksim Blinov
Lavrov, Steinmeier Call to Strengthen 'Positive Trend' in Ukrainian Talks
“Regardless of what's happening in Paris, Syria, or Libya, we will demand from our Western partners, who have more influence than anyone else over the Ukrainian leadership, that they sort things out with plans and not allow the 'war party' in Kiev to destroy the fragile hopes that were born from the Minsk agreements,” Lavrov said during a joint press conference with Latvian Foreign Minister Edgars Rinkēvičs.

A military conflict in Ukraine broke out last April when the Kiev government sent troops to the country's east to suppress the independence supporters in the region, after the latter refused to acknowledge the legitimacy of the authorities that had come to power following a coup in February.

None of the current forms of talks on the Ukrainian crisis can boast of any actual results, the Russian foreign minister stated.

“There are several different formats and, most important, these formats should work not only as a production of paper, but provide for the practical fulfillment by which they were agreed. So far none of these formats can boast of that,” he said.

© Sputnik / Sergey Guneev
Putin, Merkel Vow to Continue Ukrainian Peace Talks in Normandy Format: Kremlin
Talks on Ukrainian reconciliation have been conducted in four formats – Normandy (leaders of Germany, France, Russia and Ukraine), Geneva (Ukraine, Russia, the United States, the European Union), Weimar (Ukraine, Germany, France, Poland) and Minsk formats. The Minsk format, including representatives from Russia, Ukraine, the self-proclaimed Donetsk People's Republic, the self-proclaimed Luhansk People's Republic and the Organization for Security and Co-operation in Europe (OSCE), has to date proven to be the most effective.

“The Islamic State is a structure that demands more attention and needs to be opposed more seriously. Its emissaries are not just appearing in Syria and Iraq where there is a so-called caliphate, but also in Libya and already in Afghanistan, which is just a hop away from Central Asia. And it's from there that these people collaborate with those who are conducting terrorist acts in Europe,” he said.

The most recent wave of terrorist attacks in Europe took place last week in France when the country suffered three days of violence in a row, the highest loss of life occurring at the office of Charlie Hebdo, a Paris-based satiric magazine.

A US-led international coalition has been conducting airstrikes against IS positions both in Iraq and Syria that have killed more than 1,000 people over the last three months, according to the Syrian Observatory for Human Rights.