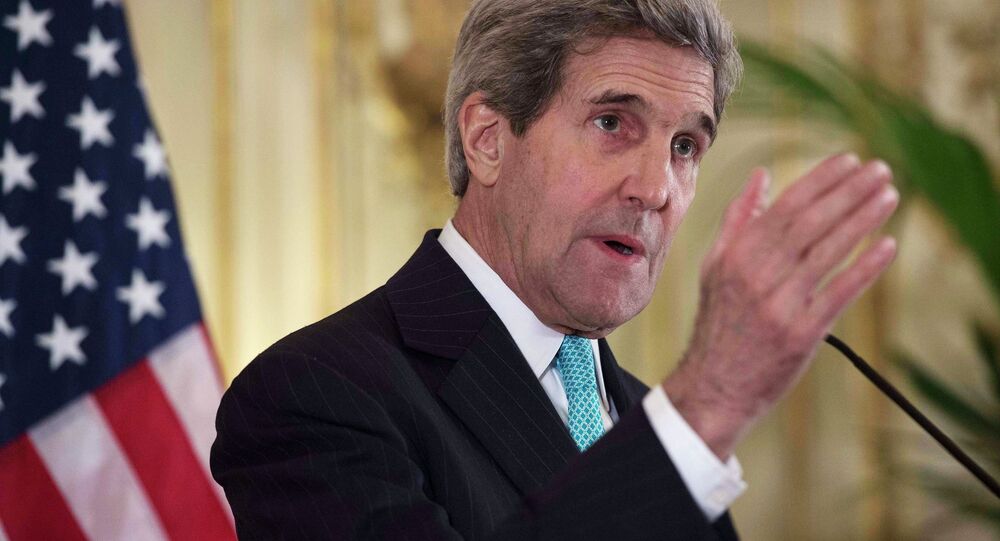 US Secretary of State Kerry said Monday that Washington and New Delhi were strengthening partnership to combat terrorism, piracy and proliferation of mass destruction weapons.

NEW DELHI, January 12 (Sputnik) — The United States and India will strengthen their partnership in combating terrorism, and also deepen their dialogue on key political and security issues, US Secretary of State John Kerry said Monday.

© Flickr / Consul Consolidated
India to Open Biggest Solar Panel Factory in $4Bln Joint Venture With US-Based Company
“We are strengthening our partnership to combat terrorism, piracy and proliferation of weapons of mass destruction,” Kerry said in his address during the ongoing Vibrant Gujarat Global Summit 2015 in Gandhinagar, the capital of Gujarat State, India.

Kerry also stated the two countries would discuss maritime security in the region.

“We are also working together to secure our maritime security throughout the region,” he said.

The US Secretary of State suggested that the United States and India have already been investing in successful relations, and would continue working together, focusing on acute political and security issues.

“We are also committed to dialogues on key political and security issues,” Kerry stated.

© REUTERS / Larry Downing
US Warns India of Terror Threat Ahead of Obama Visit: Indian Ministry
India and the United States cooperate in a wide range of areas, including science, defense, security, trade, environment, agriculture and health. The two countries have regular contacts on political and official levels, with the leaders focusing on both regional and global issues.

The United States and India will work together to try and reach a landmark climate change agreement in Paris at the end of the year, US Secretary of State John Kerry said Monday.

"We are committed to work with India to reach a landmark climate change agreement in Paris at the end of this year. I know this will be a topic of conversation between President Obama and Prime Minister Modi during the former’s visit to India,” Kerry said in his address during the ongoing Vibrant Gujarat Global Summit 2015 in Gandhinagar, the capital of Gujarat State, India.

Later in January, US President Barack Obama will meet with Indian Prime Minister Narendra Modi to discuss the steps that the two countries should take toward achieving a climate change deal.

At the moment, UN negotiations are underway aimed at developing a comprehensive international climate change agreement covering every country. The agreement is expected to be signed during the Paris Climate Conference in December 2015, and to be implemented by 2020.

Would Obama Match Putin’s Success When He Gets to India?