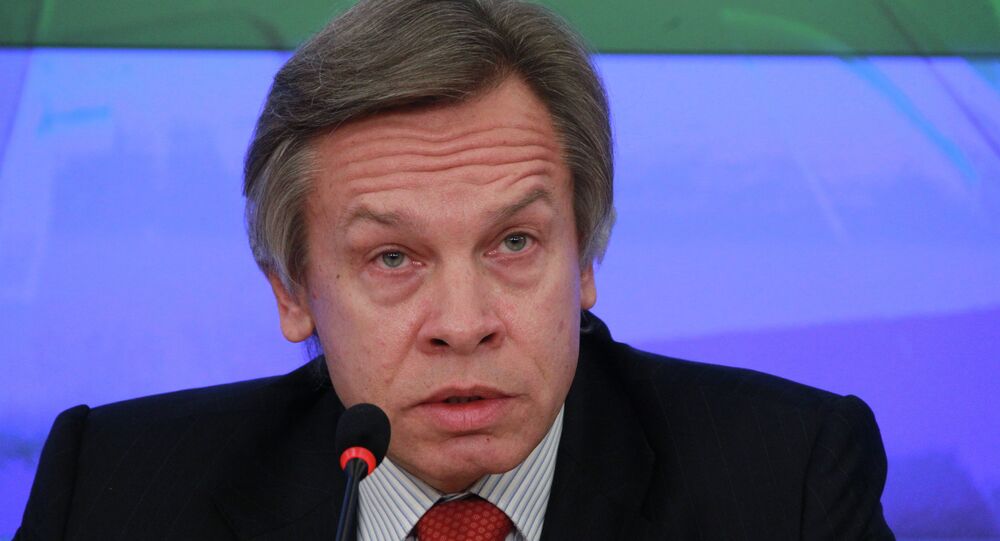 Russia's Alexei Pushhkov, who heads the foreign affairs committee at the country's lower house of parliament commented on the Kiev's bombing of eastern Ukraine during the rally of solidarity in France, saying that 'Ukraine was bombing Donbas in a most 'civilized' manner: 5 were killed, including two children'.

© Sputnik / Alexei Druzhinin
Putin to Confirm Attendance at Ukraine Summit Talks After Meeting Takes Shape: Reports
MOSCOW, January 12 (Sputnik) — A senior Russian lawmaker has lashed out at Ukrainian President Petro Poroshenko for having eastern Ukraine bombed at a time when hearts of "all civilized countries" went out to France and those killed during three days of violence in Paris.

A massive rally of solidarity with victims of terror attacks on the French satirical magazine Charlie Hebdo brought together millions of people on Sunday, as well as up to 50 world leaders, who stood united against what is largely perceived as an attack on freedom of expression.

Commenting on the unity march in Paris, Ukraine's Poroshenko tweeted that the rally "has drawn together in France all civilized countries from around the world".

Russia's Alexei Pushkov, who heads the foreign affairs committee at the country's lower house of parliament, retorted that throughout Sunday "Ukraine was bombing Donbas in a most 'civilized' manner: 5 were killed, including two children," according to his Twitter post.

Ukraine's breakaway Donetsk republic said earlier that Ukrainian government forces had pounded the suburbs of the region's capital Donetsk about 30 times since Sunday, while Kiev claimed its military positions in the region had been fired at more than 40 times.

Eastern Ukraine has been unstable since the government in Kiev launched a massive military campaign to crack down on those unhappy about the February coup and the country's new leadership that came in its wake.

A ceasefire has been in place in the region since December 9, although the warring parties have accused each other of violating the truce. According to the UN humanitarian agency OCHA, some 1.4 million Ukrainians in the conflict-affected areas now require humanitarian assistance. The agency estimates that a total of 4,808 people have been killed in clashes since the crisis broke out in April.