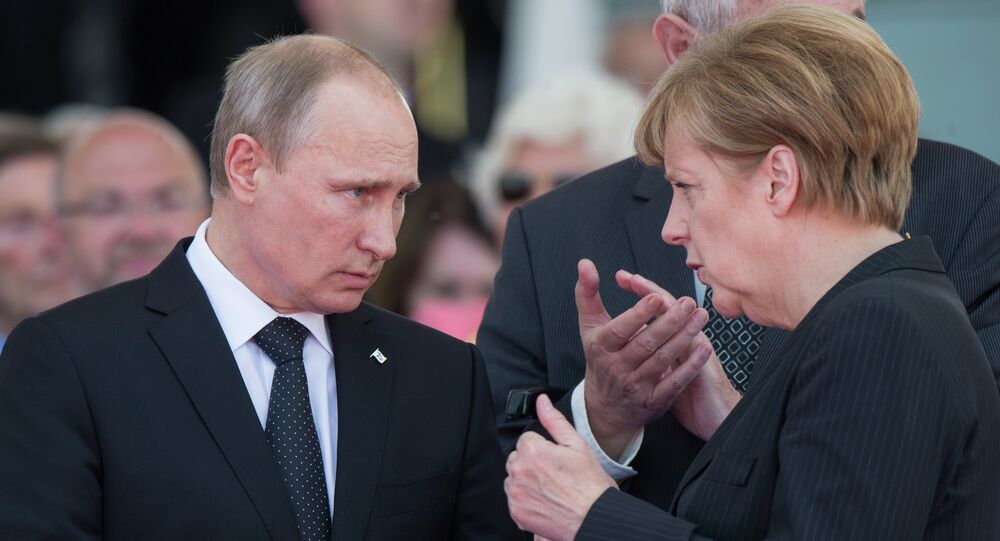 Russian President Vladimir Putin and German Chancellor Angela Merkel have discussed the Ukrainian reconciliation issue, agreed to "increase joint efforts in the ‘Normandy format’ in this regard.

“The leaders of Russia and Germany confirmed their mutual intention to continue promoting peaceful settlement in Ukraine, including with regard to the implementation of the Minsk agreements,” said a statement, published on the Kremlin’s official website late Saturday.

According to the statement, Putin and Merkel agreed to "increase joint efforts in the ‘Normandy format’ in this regard, including ongoing consultations between foreign ministries.”

Ukrainian peace talks have been held in several formats. The Normandy format was established in June 2014, when Russian, French, German and Ukrainian leaders met in Normandy to discuss Ukrainian reconciliation. The heads of the so-called Normandy quartet countries are scheduled to meet again in Astana, Kazakhstan, on January 15.

The Minsk format, which includes representatives from Kiev, Moscow and the Organization for Security and Co-operation in Europe, as well as the self-proclaimed Donetsk and Luhansk people’s republics in Ukraine's southeast, has so far shown to be most effective.

Russian President Vladimir Putin in a telephone conversation with German Chancellor Angela Merkel has outlined the importance of ceasefire and economic recovery in the southeast of Ukraine.

"Putin has emphasized a prioritized significance of the ceasefire and support for the economic recovery of the affected regions in Ukraine's southeast. A direct political dialogue between the representatives of Kiev and Donbas was underlined as the only option and a pressing need [to resolve the Ukrainian crisis]," the statement said.

The phone call was initiated by the German side.

The military conflict in the southeast of Ukraine was launched by Kiev authorities in April 2014 to suppress independence supporters in the region, who refused to recognize the legitimacy of the country's coup-imposed government.

© REUTERS / Mariana Bazo
Ban Ki-moon: Global Security Threatened by Ukrainian Conflict, Other Hot-Spots
The ceasefire agreement was reached by the warring sides in September 2014 during the meeting of the Contact Group on Ukrainian crisis reconciliation in Belarusian capital Minsk. Another bid to resume peace negotiations between the sides was made in December 2014, when Ukrainian President Petro Poroshenko declared a "silence regime" in the east of the country. However, both parties of the conflict subsequently accused each other of violating the truce.

The leaders of Germany and Russia are expected to meet in Kazakhstan's capital Astana in mid-January to discuss the situation in Ukraine.

© Flickr / European Parliament
European Commission Proposes $2.1Bln Financial Assistance to Ukraine
Kiev and eastern Ukrainian militia agreed to end months of bloodshed during talks in Minsk in September 2014. During meetings in the Belarusian capital, a ceasefire agreement and a memorandum, specifying the ceasefire’s implementation were signed. However, the agreement has been routinely violated, with both sides of the conflict accusing each other of breaking the truce.

German Chancellor Angela Merkel said she was willing to take part in the so-called Normandy Format talks on Ukraine crisis due in mid-January after all parties to the Minsk memorandum make headway on its implementation, the government spokesperson Steffen Seibert said.

"A summit in Astana [Kazakhstan] or elsewhere cannot be confirmed at the moment. All parties should now contribute to making speedy progress on the Minsk agreements," the statement published at the government's official webpage said.

Seibert made it clear that, despite the chancellor's readiness to go to Astana, the final decision would be taken after the parties to the Minsk agreement make "concrete progress" toward reconciliation.

"A substantial proximity of positions, for instance on a ceasefire and the establishment of the demarcation line, is required for a meeting to be of any use," the statement said.

According to the spokesperson, Merkel was also concerned about the humanitarian situation in eastern Ukraine.

Ukraine has been gripped by violence since the government in Kiev launched a massive military operation against two breakaway provinces in the country's east, triggering an exodus of hundreds of thousands refugees into neighboring Russia. Thousands more have been internally displaced or killed in the ensuing clashes, while the region is teetering on the brink of a humanitarian disaster.