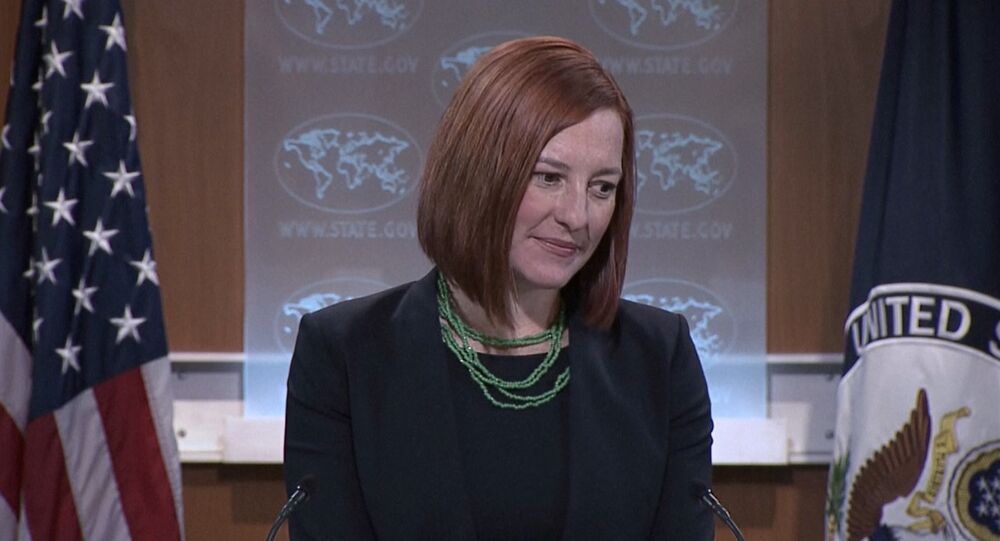 US to Refrain From Ukrainian Peace Talks in Kazakhstan: State Department

US State Department spokesperson said that Washington will not take part in the upcoming Ukraine peace negotiations in Kazakhstan.

WASHINGTON, January 6 (Sputnik) — Washington will not take part in the upcoming Ukraine peace negotiations in Kazakhstan but considers them a positive move, US State Department spokeswoman Jen Psaki said.

"There are no plans for the US participation in talks proposed for January 15," Psaki told reporters Monday. "Our view is certainly that any opportunity to take further steps forward for Russia and separatists to fulfill the Minsk commitments and ultimately move closer toward a peaceful resolution of the conflict in eastern Ukraine is positive."

© RIA Novosti . Mikhail Palinchak
Poroshenko Offers in Phone Call With Kerry to Revive Ukrainian Peace Talks
In December 2014, Ukrainian President Petro Poroshenko announced that he would meet with the leaders of Germany, France and Russia in Kazakhstan’s capital Astana on January 15 for Normandy format talks on Ukrainian reconciliation.

The so-called Normandy quartet was established in June 2014, when Russian, French, German and Ukrainian leaders met in Normandy to discuss the Ukrainian crisis.

Ukrainian peace talks have been held in several formats. The Minsk format, which includes representatives from Ukraine’s central authorities, the self-proclaimed Donetsk and Luhansk people’s republics, Russia, and the Organization for Security and Co-operation in Europe, has shown to be the most effective.

During talks in Minsk in September, Kiev and independence supporters in Ukraine’s south-east signed a ceasefire deal and later a memorandum stipulating the ceasefire’s implementation. However, both sides have since accused each other of violating the truce.