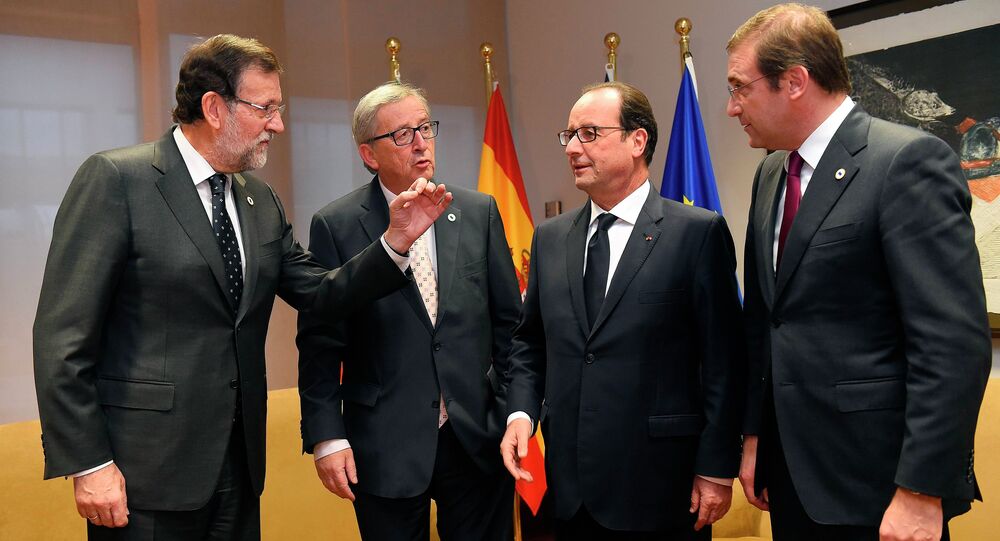 Summing Up the Rounds of Western Sanctions on Russia in 2014

The EU and US governments imposed several rounds of sanctions against key sectors of the Russian economy in an attempt to cripple its banking, defense and energy industries over Moscow's stance on the Ukrainian crisis.

© Sputnik / Sergey Pyatakov
Lavrov Accuses Washington of Unleashing Sanctions Campaign Against Russia
MOSCOW, December 25 (Sputnik) – The United States, the European Union and their Western allies have introduced a number of sanctions against Russia over the course of the year in a bid to make the Kremlin change its stance on the crisis in Ukraine following a coup in February.

The EU and US governments have been ratcheting up penalties against key sectors of the Russian economy in an attempt to cripple its banking, defense and energy industries, moves that have been met with a lukewarm response from Europe's trade powerhouses, since EU trade volumes with Russia dwarf that of the United States.

© Sputnik / Vladimir Sergeev
EU Concerns of US Political Influence Grow Amid Russian Sanctions: Experts
The United States and Europe began by imposing individual travel bans and asset freezes on persons they believed played a role in the crisis that broke out in spring in Ukraine's southeastern provinces of Luhansk and Donetsk, or had been instrumental in Crimea's reunification with Russia.

Since March, the West has blacklisted dozens of Russian and Crimean officials, as well as Ukrainians they believe led the uprising in the country's east. They also targeted several Russian companies that allegedly threatened Ukrainian sovereignty. All sanctioned firms were owned or linked to Russians belonging to President Vladimir Putin's "inner circle."

Travel bans essentially meant that many Russians and Crimeans became persona non grata in Europe and the United States, although the bans did not target diplomats as the West's aim was to make Russia change its stance on Ukraine instead of isolating the country internationally.

© RIA Novosti . Alexei Nikolskiy
Russia Likely to Respond to New Round of Western Sanctions: Kremlin Aide
In July, the United States changed its tack, slapping Russia with economic sanctions that prohibited US nationals and entities from providing new funds to Russian financial institutions. Europe followed the US Treasury's lead in targeting Russian state banks that were now excluded from raising long-term loans, which effectively limited their access to US and EU capital markets.

The sanctions called into question the ability of the banks to refinance their maturing loans with international investors. This prompted Russia's Central Bank to adopt in November an array of new regulations to help the country's cash-strapped financial institutions, including granting the state-run deposit insurance agency with $7.2 billion in funds. The Russian government also pumped billions of dollars into the market to shore up the liquidity of its leading companies.

More than a dozen of Russian defense companies had their assets in the United States frozen by a Treasury executive order in July. They included weapons maker Kalashnikov Concern, missile manufacturer Almaz-Antey, as well as other arms firms producing a wide range of military equipment and electronics.

© Sputnik
Donetsk Leader Says Witnessed Downing of MH17 Plane in Eastern Ukraine
This decision came after the tragic crash of Malaysia Airlines flight MH17 over east Ukraine on July 17, which killed 298 people from all corners of the world. The Pentagon and Kiev were quick to blame the air disaster on militias who held large swathes of land near the Boeing's crash site. They were accused of shooting it down with a Russia-made Buk missile system, a claim that has never been confirmed.

Although no clear link between Russian arms and the alleged Boeing downing was ever established, Australia, Canada and Japan also sanctioned the country following the crash.

The disaster served to justify the US government's push to have Europe broaden penalties against Russia. The move brought a mixed bag of reactions from Germany and France, which has been forced to renege on a multibillion-dollar deal with Russia for the delivery of two Mistral assault ships. In September, the European Union also added Kalashnikov and eight other military firms to its blacklist, barring them from receiving dual-use technologies from its firms.

The European Union targeted three major oil companies – Russia's largest oil company Rosneft, oil pipeline firm Transneft and Gazprom's oil subsidiary Gazprom Neft, all of which have been accused of undermining Ukraine's sovereignty in an unspecified manner. They have been barred from seeking finance on European capital markets.

© REUTERS / Emmanuel Dunand/Pool
We Should Make Our Own Decisions: 62% of Germans Want EU to Depend Less on America (Infographic)
These restrictions did not affect Russian gas deliveries to the European Union. The 28-member bloc receives on average about 30 percent of its gas supply from Russia, while some ex-Soviet countries in Eastern Europe and Finland receive up to 100 percent of their natural gas from Russia.

The United States expanded its sanctions in summer, limiting access to US capital markets for Russia's largest independent natural gas producer Novatek and Rosneft, a strategic energy partner of Texas-based ExxonMobil. Washington stressed the move was designed to have maximum impact on the Russian economy while shielding US energy companies from any possible repercussions. It also set a September deadline for Exxon, Shell and Total to pull out of joint oil and gas projects with Russia.

© Sputnik / Taras Litvinenko
US Imposes New Crimea Trade Restrictions, Sanctions: White House
Starting with seemingly harmless travel bans and assets freezes for Crimean officials, the United States and the European Union – and later Canada, Japan and Australia – stiffened the penalties for the region's decision to leave Ukraine for Russia throughout the year, stemming foreign investment and trade with the Black Sea republic and its major port city Sevastopol.

In its most recent move, the European Union barred its nationals and companies from buying real estate in the region and participating in Crimean infrastructure and mineral exploration projects. EU cruise ships have also been banned from entering and calling at Crimean ports.

Kevin Lamarque
Poroshenko Thanks US for Sanctions Against Crimea: White House
A blacklist of Crimean companies includes two local gas companies, Chernomorneftegaz and Feodosia, accused of using Ukrainian assets; a commercial port and ferry line in the eastern Crimean city of Kerch; and the world-famous Massandra and Novy Svet wineries, among others. They also grounded a subsidiary of Russia's Aeroflot that flew routes between Crimea and Moscow.

© East News / PhotoNonStop RM, Marc V
Baltic, Finnish Farmers Hit by Russian Food Ban Planning Protest Campaign
In the wake of stiffer Western sanctions, Russia has threatened Washington, Brussels and their allies with a calculated response, saying attempts to penalize it for the internal conflict in east Ukraine is undermining the peace process there. Together with the Organization for Security and Co-operation in Europe (OSCE), Russia has been a key mediator at peace talks in the Belarusian capital Minsk.

In August, Moscow introduced a one-year ban on a variety of food imports from the United States, the European Union, Norway, Canada and Australia. The move was greeted by Russia's partners in the nascent Eurasian Economic Union, as well as Turkey and South American countries who said they were keen to fill the void in the market.

Over Quarter of Europeans Say EU Imposed Sanctions Under US Pressure: Poll